It all started in 1998, in the Mexican desert. A Vatican sanctioned SWAT team of ultra-macho, leather jacket wearing vampire slayers faced down a Euro-trash “master vampire,” wiped out his nest and shut down a prophecy. Much shit was talked, at least one innocent naked woman was degraded, many many heads were cut off, and quite a few vampires were dragged screaming by tow cables into the desert sun. JOHN CARPENTER’S VAMPIRES is a sleazy, amoral good time, maybe his most underrated, and definitely his most successful mix of western and horror. And gorey. I remember one scene, the master vampire crashed a hotel party full of drunken vampire slayers and jiggling whores, walked right up to Mark Boone Junior and tore him in half using one hand. Much fun was had by all. 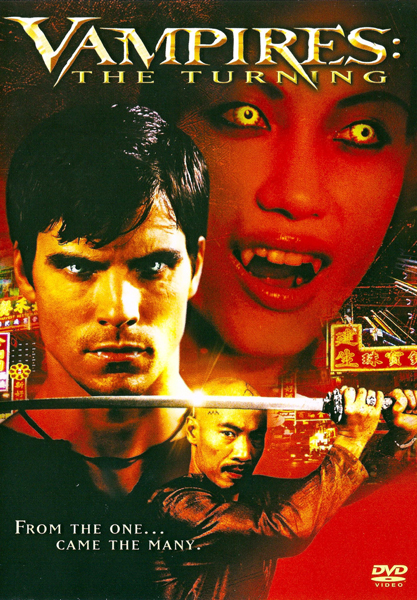 One forgettable straight to video sequel starring Jon Bon Jovi later, we find ourselves in Thailand, where vampires ride around on motorcycles at night wearing funny clothes and goggles, and when they confront our hero (a whiny, uncharismatic American tourist) there isn’t head cutting, there is kickboxing. You know, in case BLADE 1-3 and however many seasons of BUFFY THE VAMPIRES SLAYER tv show didn’t cover that area enough. At some point in the last decade vampires stopped being pouty self-loathing poets and became ninja henchmen. Hard to say which is better, I guess.

The only thing I remember about PART 2 is 1) it exists and 2) it stars Jon Bon Jovi. So I re-read my review (Here) and it turns out my main complaint was that it was just a rehash of the original. This time it’s the opposite problem. This one really has little to no connection to John Carpenter’s movie. A half-assed team of vampire slayers comes in at the end, but otherwise it takes place among the very different world of Asian vampires where the annoying American tourist (Colin Egglesfield) has to snoop around because his girlfriend got kidnapped.

One thing worth mentioning the vampire problem starts. Egglesfield and his girlfriend (Meredith Monroe, from Dawson Creek apparently) are vacationing in Thailand, and they go to a muay thai match. She gets upset because he’s really into it, and also because she gets splattered by blood from the fight (one of very, very few arguably inspired touches in the movie – I thought this would be what attracted the vampires to her, but no such luck). She storms away and starts bitching about how could he enjoy this sport, etc.

GUY: I studied and trained muay thai since I was a kid. I just wanted to see the real thing while I was here.

GIRL: How can this appeal to you? All it is is brutal fighting.

GUY: There’s more to it than that. There’s a philosophy.

GIRL: I love you Connor. I always will, but this isn’t working. And it hasn’t been for a long time.

He tries to woo her with promises of elephant rides and ancient ruins, but she runs away pouting, which is when she gets seduced and kidnapped by a vampire in an alley. See, that’s what happens when you wander around alone and lost in a foreign country. You either end up in prison for smuggling drugs or you get kidnapped by motorcycle vampires. Everybody knows this, except this gal.

But that’s not even what I care about, what I care about is, what the fuck kind of relationship is this, man? I don’t care if you have a LEGITIMATE issue, you don’t fucking break up with your boyfriend or girlfriend in the middle of your vacation to Thailand. Especially if you don’t even know the way back to your hotel. You say this “hasn’t been working for a long time…” well maybe you could’ve brought this up BEFORE GETTING ON THE FUCKING PLANE TO THAILAND. That would’ve been, in my opinion, a better time to discuss the different directions your lives are going in.

And another thing lady. If what this guy says is true, muay thai has been a passion of his since he was a kid. Not just since he saw ONG-BAK, like everybody else. So unless you’ve been screwing the dude since infancy, you do not have a leg to stand on here. Don’t go with your muay thai kickboxer boyfriend to Thailand, then get mad at him for his lifetime of enjoying muay thai kickboxing. I mean for crying out loud lady, are we supposed to sympathize with you? You’re a fucking loon!

I’m not saying she DESERVES to be kidnapped by goofy motorcycle riding vampires. I’m just saying, MAN what a shitty girlfriend. This guy is nuts trying to visit a foreign country with her. I think alot of people have been through that kind of crazy shit before, you wonder why the fuck she has to freak out NOW. Why can’t she ride the damn elephant, go home and THEN freak out? Why? And to make matters worse this poor dude – and really this is the only reason to sympathize with the guy because he has no screen presence at all – he finds himself in this situation where he has to save his crazy girlfriend from a whole bunch of vampires. I mean what’s he supposed to do, just figure they’re broken up and go home? No, he’s got some sense of morality, plus he’s convinced he “loves” her, so after the pigs and the vampire slayers make it clear they’re not gonna help him, he hassles his way into a clan of good guy vampires who only drink human blood with the express permission of the blood owner.

See, this ancient sexy vampire gal named Sang (Stephanie Chao) was part of a clan of vampires who swore not to drink human blood. (No mention of what they drink instead, but I bet it’s soy based.) But Sang had low self esteem or whatever so she gave in and bit some dude, creating a whole line of vampires who drink blood without shame. So for 800 years she’s been fighting the evil vampires she created and waiting for a certain eclipse so she can do this ritual that will turn the whole bloodline into mortals, including the dudes who stole whatsisdick’s emotionally troubled whacko girlfriend.

So of course he realizes that he should let Sang “turn” him, because why not? Use vampire powers for the night, then when the eclipse comes, he turns back with no repercussions. I mean he really really truly loves his girlfriend, so much that he would do ANYTHING to save her… in fact he would even screw a sexy Asian vampire goddess. If that’s what it takes.

(She bites him and it has the usual sexual undertones, but then they actually do start screwing, instead of all that symbolic screwing crap.)

I mean that’s one really true part of the movie. People always thinkin with their dick. Sang helps rationalize it, saying “She– *we* – are very lucky.” Yeah, I’m sure the crazy girlfriend really appreciates your heroic sex romp. Possibly the most valiant “pussy on the side” of all time. Congratulations.

Anyway, this movie raises a couple important questions. One, can it really be called “eternal youth” when half the vampres are old men? And two, what the fuck ever happened to GOOD bad movies?

I mean seriously, whatever happened to the ROAD HOUSEs and the STONE COLDs and the ON DEADLY GROUNDs, the truly memorable and rewatchable bad movies? Has America lost its will to be interesting at the same time it sucks? You watch these straight to video movies, you’d think you’d be able to get a good laugh now and then, but trust me, it’s rare. Steve Seagal is the only one consistently making funny bad movies in the straight to video market. Everybody else is just dull.

We need more balls, more Craig Baxley style action, more ridiculous dialogue. Not just a randomly re-assembled jigsaw puzzle of generic lines and martial arts scenes. Everybody has funny-bad lines they can quote from action movies of the ’80s and maybe early ’90s. “What kind of a name is ‘Chance’?” “Mah momma took wan.” etc.

But what about the last ten years? The only one I can think of is that classic from CHRONICLES OF RIDDICK, when he said, “I haven’t smelled beautiful in a long time.” But maybe that was a fluke. I’m sure there’s others I’m forgetting, but for the most part, this is a big wasted opportunity here, all these bad movies, and no way to enjoy them.

Also, one legitimately good touch, at the end after he saves his girlfriend they aren’t madly in love again. They don’t talk, she just stares gloomily out the window. That was pretty good. Not worth the wait, though.

On the cover of the movie it says, “FROM THE ONE… CAME THE MANY.” They always gotta have a tagline like that, like it’s translated from ancient vampire hieroglyphics. Like the marketing department is quoting from prophecy. Look man, I’ll give you a prophecy. This one is about all the horrible straight to video movies, and the poor asshole who was cursed to watch them. In order to enter this dimension they must travel through the vessel of his poor, abused eyes. He hates his curse but he keeps watching because he knows he is destined to some day discover THE ONE. The straight to video movie that is actually a keeper. GINGER SNAPS was a false alarm, it had a theatrical release in Canada so it doesn’t count. And the Seagal movies go without saying so those don’t count either.

But somewhere out there, some day, someone is gonna make a really fantastic movie, and they’re gonna make it straight to video, and this poor bastard is gonna watch it first and finally fulfill his destiny.

Until then, have mercy on the poor motherfucker, PLEASE. I know they’re working on a ROAD HOUSE 2, but they better do it right. Not just a boring remake without the spark, like WILD THINGS 2. Please, no more mediocre straight to video sequels. I want GOOD or I want SPECTACULARLY BAD.

FOR GOD’S SAKE HELP ME

DTV DTV sequels Roger Yuan vampires
This entry was posted on Thursday, February 24th, 2005 at 3:41 am and is filed under Action, AICN, Horror, Reviews. You can follow any responses to this entry through the RSS 2.0 feed. You can skip to the end and leave a response. Pinging is currently not allowed.

3 Responses to “Vern sees the alleged sequel to John Carpenter’s THE VAMPIRES called VAMPIRES: THE TURNING!”