VERN Sees THE TRUTH ABOUT CHARLIE!!

All my favorite muthas are hanging out tonight. Quint and Beaks and Vern, our man in Seattle, all 7 foot 5 inches of bad-assedness of him. He’s here tonight with a look at a film that I am hearing basically nothing good about so far. I hope all the buzz is wrong. I hope Jonathan Demme has made a great, breezy entertainment that manages to have fun with the classic CHARADE. I hope because I like Demme. I hope because the alternative is tears.

It’s me Vern again. Last week I sent you a review of the unneccessary remake of THE RING, which if I remember right, I believe I liked that one. This week I got another review of an uneccessary remake. This one wasn’t quite so hot.

The movie is THE TRUTH ABOUT CHARLIE and if you know your shit, you know it’s a remake of Stan Donen’s CHARADE, an undeniably great movie starring Carey Grant and Audrey Hepburn. I mean you can’t beat that. You young “geeks” reading this sight, go out and rent some Carey Grant movies and study the master. It is completely believable that Audrey Hepburn would fall for this guy, even after discovering he’s a fraud. Harry is a good guy, I met the man in person and I shook his hand but if you REALLY want somebody to look up to and base your lifestyle on, look into this Carey Grant. When he was a young man he ran away and joined the circus, changed his name and what not, I’m not sure what happened in between but long story short he became the most charismatic man ever on screen. YES, he is more charismatic than superman. 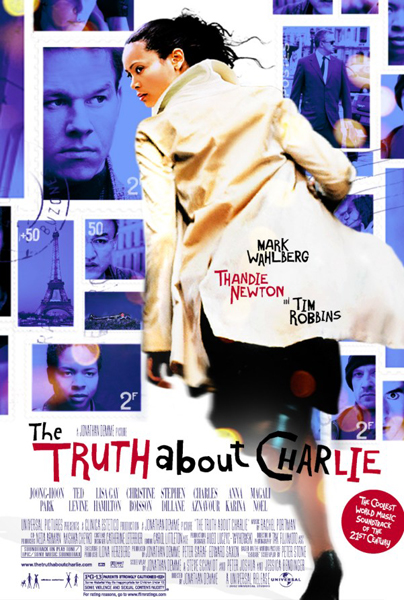 So there’s your homework, you newsies. Become Carey Grant. Anyway about THE TRUTH ABOUT CHARLIE.

The number one mistake in this movie was to remake CHARADE. The number two mistake was in the casting. Who they really needed, for this to not be overshadowed by CHARADE, would be to cast Carey Grant and Audrey Hepburn in the lead roles. Unfortunately today’s filmatists feel they have to slum it with more “contemporary,” “living” actors.

Actually Thandie Newton is great, she’s about as perfect as you could get for this role without using a shovel. She’s beautiful and glamorous and she has that great accent. She could probaly talk about “takin a huge dump” and make it sound adorable. Without any great star power (I mean, I know she was in Mission Impossible part 2, but…) she still has a tremendous knock you on your ass screen presence that fills the Audrey Hepburn hole real good.

I’m not knockin Mark Wahlberg either. He does his best to be charming and works surprisingly well in a retro leading man kind of role, even wearing a fedora. I heard they were gonna play him “Street Smart” instead of suave, but I didn’t see it that way. I mean I like the guy, I think he did good. The problem is, he’s not trying to play it too different from Carey Grant, and the simple fact is there’s no fuckin way you’re gonna get a human being that can fill Carey Grant’s shoes. Maybe Chow Yun Fat could try, but I don’t think he could pull off the witty banter in English quite yet.

Thandie Newton immediately falls for Mark Wahlberg, the way Audrey did for Carey, and melts like a popsicle in a toaster when he flirts with her. But it’s not very convincing because she seems out of his league. She seems out of anybody’s league. I mean it’s not awkward and embarassing, like when Vin Diesel gave Asia Argento that sloppy kiss in XXX. But if you’ve seen CHARADE it’s just not acceptable because Audrey and Carey were just eyein’ each other up and down the whole movie in that weird flirtation/competition where at various times it seems like they can barely hold back from tearing off each other’s clothes and/or killing each other.

I’m pretty sure Jonathan Demme who directed this picture thought of the idea of casting Thandie Newton and decided to make the movie based on this stroke of admitted genius, and didn’t really think through the full ramifications of remaking CHARADE. I’m not against remakes and I guess I’m not even against remakes of really good movies, since I liked the remake of THE RING. But CHARADE is so perfect on so many levels that it’s suicidal to fuck with it. Not only do you have the perfect leads, but you got Walter Matthau, you got James Coburn. And you got Stan “the man with the plan” Donen. This man directed SINGIN’ IN THE RAIN. This man directed SATURN 3. Well, bad example on that last one but the man knows what the fuck he’s doin, you couldn’t get
a more perfect cast and director and story combo. And this time, you didn’t.

I think I can see what Demme was thinking, though. Even without the Carey/Audrey factor, CHARADE is a real good story with exotic locales and thrilling twists and all that kind of business. It’s alot of fun because you realize early on that most of the characters aren’t who they say they are and aren’t trying to do what they say they are trying to do and reality keeps shifting as you think Carey Grant is one person and then another. The trouble is Demme seems to be going for pretty much a straight thriller, he
dumps the whole fun romp type deal. There are a couple flirty lines lifted from the original but mostly it doesn’t have a sense of humor. So it ends up very dull.

Did you ever see SATURN 3 though Harry, that’s the weird mad robot on a space station movie where Harvey Keitel got his voice dubbed by another actor, even though I’m pretty sure he speaks english.

HUGE SPOILERS THIS PARAGRAPH ONLY. DO NOT READ, ASSHOLE. MOSTLY IF YOU HAVEN’T SEEN CHARADE. TRUST ME JACK YOU DON’T WANT TO RUIN IT FOR YOURSELF.

They really blow it on some of the story too. They just don’t tell it as well. Tim Robbins plays the Matthau character with a goofy Kennedy accent, and he’s menacing from the beginning so it’s not a surprise when he turns out to be, uh, a menace. The war veteran thieves all die pretty fast so they’re not as threatening either. The guy they got to replace James Coburn is surprisingly good, but he dies of a heart attack after about a minute and a half screen time. When Thandie finds out Mark is trying to get the money, he becomes a villain to her. So you don’t get the whole angle that she loves him even though he’s a thief but she needs him to give the money back to the rightful owner. And then they throw the final twist into a climactic gunfight so you don’t get the surprise in the office at the end and Carey Grant doing that goofy face. Carey Grant’s not in it anyway though so I don’t know how they woulda got him to do the face.

Not to say it’s entirely without merit. There is a pretty good chase/race between Mark Wahlberg and some other dude. There is a dancing scene that would’ve fit into the original, but I don’t think it was in there. They got some weird Truffaut references and shit, with an appearance by the dude from SHOOT THE PIANO PLAYER. Kind of a weird thing to have in a remake of a movie that has nothing to do with the french new wave, but I ain’t complainin.

If you love Thandie Newton and you get giggly about cute homages to the french new wave, it might be worth your while. Otherwise, go rent the criterion of CHARADE and forget this thing even exists. It won’t be that hard.

p.s. Harry, the talkbackers want me to tell you to stop giving them mental pictures of you in sexual situations with moriarty, etc. So please, whatever you do, DO NOT say something about buttfucking moriarty in your intro, or anything along those lines. Even in a loving and consensual way. thanks

You know, Vern, my sainted mother reads this site. She’s 342 years old (she had me young), but she still manages to get up every day and read the site, every word, and now you have to go and say that, and…

Ma, he was in prison. That’s all I can say. He’s got an excuse. Seriously.

Jonathan Demme Mark Wahlberg Thandie Newton Tim Robbins
This entry was posted on Tuesday, October 8th, 2002 at 9:55 am and is filed under AICN, Mystery, Reviews, Thriller. You can follow any responses to this entry through the RSS 2.0 feed. You can skip to the end and leave a response. Pinging is currently not allowed.