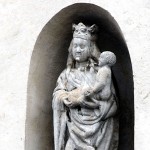 This is a movie about a beautiful teenage girl from Colombia who works a shitty job dethorning roses, gets in an argument with her boss, one thing leads to another and suddenly she’s pursuing other opportunities. Around the same time she finds out she’s pregnant, gets in an argument with her boyfriend and they announce they don’t love each other and begin a new journey of life travelling on separate paths. (A convenient way for the guy to avoid responsibility. Well played, deadbeat. Well played.) Also she meets a new guy and this guy has some connections with drug traffickers. Which leads to an exciting new moneymaking opportunity.

You probaly already heard of this movie so you know what it is. She becomes a drug mule. She swallows something like a dozen balloons of heroin, has to carry them on a plane to New York. She’s part of what they call “shotgunning” where they send a bunch of mules at the same time, figuring if one of them gets caught it will create a distraction for the others to get through. She knows some of the other mules (one of them is her whiny, pouty best friend) so it puts them in sort of an uneasy alliance/competition. 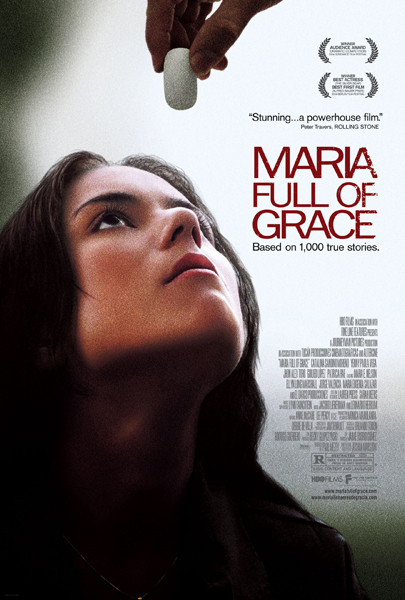 I don’t know about you but I wouldn’t be real excited about the idea of swallowing something like that. I mean have you seen the picture on the cover? She’s looking up at a baggy like she’s about to eat her magic communion pie or whatever (I don’t know man, I’m not catholic) and it’s a pretty unsettling image to say the least. And these balloons aren’t even as big as the real ones people swallow. This poor actress had to really swallow a balloon on camera. It was filled with powdered sugar, not heroin (imagine the sugar rush if it woulda broke though). Robert Deniro gained weight, Christian Bale lost it, but did either of them have to shit out a solid object? I don’t think so.

This poor gal has a scene where she’s supposed to be shitting just off the edge of the screen. Talk about degrading. I doubt it was the real deal but still. On one hand, it sort of ruins the shine of having a pretty girl in the lead role. On the other hand, no way they woulda made a movie with a regular lookin gal takin a dump like that. I mean come on. So having a pretty actress like this is almost cheating. Hello America, you cannot relate to impoverished Colombians in real life, but what about this hot little number? But oh well. That’s why she’s full of grace, I guess, in addition to the heroin and baby.

While she’s on the plane I’m thinkin man that’s gotta be uncomfortable, how do you not puke knowing there’s twelve balloons of heroin down there in your belly? Look, right down there. They’re right inside. And if you did puke, would it break one of the balloons and kill you? Anyway she freaks out, doesn’t puke but has to shit some of these out in the bathroom on the plane. So then she’s sitting there washing shit off of the balloons with toothpaste so she can re-swallow them. Which in my opinion is not one of the more glamorous things I’ve seen on film. Definitely not in the top 5 at least.

Anyway ladies, that’s what you gotta top to get an Oscar nomination now. The bar is set. Good luck everybody.

One thing I was thinking afterwards. What if the plane got hijacked and she had to stop the hijackers without popping the balloons? Then in the end she gets caught but she gets pardoned on account of her heroic actions. That woulda been a pretty good surprise twist if it turned into PASSENGER 57 all the sudden. But maybe it’s too soon. Never forget, etc. Maybe some day.

Well they didn’t take that route, they go for more of a realism thing. But the movie is not just about the uncomfortable plane ride, it’s also about what happens when they get there, and they realize that they can’t exactly trust the dudes who they are delivering the drugs to. So they are trapped in a strange land where they don’t know anybody and have certain issues with both the criminals and the police. It’s just not a good scene for a young girl like that.

It’s a really well made movie, especially for a first time director, and especially especially for some American white dude making a movie about Colombian drug mules. I mean maybe he has more experience in the industry than he’s letting on but I get the impression he’s just some dude who read some articles. So he made a surprisingly believable and not overly manipulative suspense movie out of it.

All the actors are real good, including not just Maria but also her friend, who seems very much like a real (and pretty annoying) person.

The only complaint I have about this movie is that it’s about girls swallowing and shitting out balloons of heroin. Really no way to get around that problem in this one, I guess. Alls I’m saying is it’s not gonna be a fun afternoon DVD viewing for anybody. I hope.

So anyway kids, think twice before swallowing balloons full of heroin. I know I will.

This entry was posted on Thursday, February 17th, 2005 at 8:44 am and is filed under Crime, Drama, Reviews, Thriller. You can follow any responses to this entry through the RSS 2.0 feed. You can skip to the end and leave a response. Pinging is currently not allowed.