I didn’t expect to write a review of this movie, but I think I liked it more than everybody else, so I figured I should stick up for it. I mean, I don’t necessarily plan to watch it again in my life, but it has an odd tone that I enjoyed and shows signs of life in ol’ Tim Burton.
Seems like most people have given up on the guy, and for good reason. After a strong decade or so of uniquely stylized, quirky perversions of mainstream entertainment he seemed to stop emotionally investing in his movies around MARS ATTACKS! and stop doing a very good job some time after that. Only his PLANET OF THE APES could ever be considered worse than his most recent one, ALICE IN WONDERLAND, which of course was his biggest hit and literally made over a billion dollars.

If he wasn’t phoning it in so bad I think some of the complaints would be unfair. I don’t think people should hold it against him that he has a recognizable visual style, set of obsessions and team of collaborators. That just makes him an auteur. And people always say he’s bad because they sell t-shirts of his shit a that store Hot Topic. (if that still exists, not sure.) Well, the same could be said for Edgar Alan Poe or many horror movies we love – who cares? But at some point he started being less of a filmatist and more of a brand name. He mostly does remakes now and the scripts keep getting worse.

The other day I listened to the screenwriter John August on Jay Mohr’s podcast. He has writing credits on BIG FISH, CHARLIE AND THE CHOCOLATE FACTORY, CORPSE BRIDE, the upcoming FRANKENWEENIE and this, but (in explaining how well he works with Burton) says he’s never had a meeting with him longer than ten minutes. As Arsenio would say, Hmmm.

None of these things point to potential redemption, and getting together with Depp again to do a movie based on the old vampire soap opera Dark Shadows sounded like literally the #1 least interesting thing Burton could possibly do. Then the trailer got my attention – oh, so they’re doing it as a comedy about a gothic vampire being out of place in ’70s America? More of a BEETLEJUICE vibe than a SWEENEY TODD? That actually got my hopes up… until all the reviews were bad. 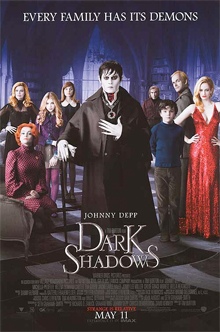 So I’m happy to say that I kinda liked it. The movie begins with a Hammer Horror type period prologue with Depp as Barnabas Collins narrating the story of his upbringing, how his wealthy family founded a port town in Maine and how a scorned lover killed his parents and girlfriend, turned him into a vampire and buried him alive.

We cut to 1972 as Victoria Winters, a gorgeous young woman with big haunted eyes like the paintings that probly hang in Burton’s house, and played by the same actress as Barnabas’s dead lover (Bella Heathcote), arrives at the worn down Collinwood estate for a new job babysitting a troubled young descendent of the vampire. There’s a couple other Collinses there played by Michelle Pfeiffer, the little girl from KICKASS that many of the male internet writers are extremely fond of, and a groundskeeper played by Jackie Earle Haley. All of them are very good. It’s great to see Pfeiffer helping carry a movie again, Haley is really funny and I gotta be honest I think it’s kinda creepy how much they play up that little girl’s sexuality in almost all of her roles, but she is a good young actress. In this one she does a dance that makes you want to send her to an all girls boarding school. Hopefully she’ll grow up more Portman than Lohan.

Construction workers accidentally dig up Barnabas’s coffin, so he goes to the manor and tries to not only acclimate to the new era but restore the Collins family seafood empire to its former glory. You know, it’s one of those vampire fishing industry tales. He’s in competition with Angelique Bouchard (Eva Green), who happens to be the witch who cursed him pretending to be one of her own descendants. She has powerful magic and is totally crazy and still pretty stalkery.

Can I be frank with you? I always enjoy Eva Green because of man reasons. She’s that sort of mean type of hot where she seems to attract you even though you’re kinda scared of her. Like a classier Asia Argento. But I do think she’s a good actress, and here she gets to play a much weirder and more over-the-top role than I’ve ever seen her in. Because she’s pretending to be young and to be somebody else she has trouble moving her face like a real human, does bizarre expressions and movements and sometimes will briefly slip into a really bad American accent. She gets to be a total seductive sexpot but also a pathetic monster cracking apart like an eggshell. Her heart literally looks like a Christopher Radko Christmas tree ornament. So she’s a weird and unfocused character, but it’s nice to see Green having this much fun.

What I like is that the movie takes its story mostly seriously, even though the hero is a weirdo murderer with claws and Nosferatu ears, and even though there are plenty of jokes about how much he doesn’t understand the world around him, or just the contrast of the gothic horror world with the ’70s. They don’t even make a punchline of it, but it cracks me up to see glass grapes on a table in a gothic castle. There are scenes that use Curtis Mayfield and Barry White songs as jokes, which is too bad because I love those songs and it would be amazing to see Barry White used sincerely in a movie. But the other period tunes (even The Carpenters) are used in a less jokey type of way.

I guess that’s what I see in this movie that I didn’t in ALICE IN WONDERLAND – it seems like he means it more. He’s doing familiar Burton topics, but he’s doing it because this is the shit that excites him, I think.

So he’s got an atmospheric Hammer type feel in a real-looking town. He’s got Haunted Mansion-esque ghosts and some blood. He whips it up to a dramatic climax that includes vampire, witch, ghost, one other major monster type, inanimate objects come to life, shotgun blasts, fire, flashbacks, revelations, and all in the intimate setting of the house instead of one of those bullshit “we gotta make it about destroying the whole city and/or world” type climaxes you usually get in a TV show adapted into a movie.

The previous Burton movie it’s most similar to is SLEEPY HOLLOW. It’s got the Johnny Depp comedic-unorthodox-hero (but more deadpan this time), the classic horror feel, the Christopher Lee cameo, but an ending that works better in my opinion. Less decapitation I guess would be one weakness. But we’re moving back in the direction toward the good Burton, right?

My favorite screenwriting trick in the movie is when the witch lady records Barnabas confessing to a bunch of murders and plays it in front of the whole town to expose him. I love it because this is a hackneyed cliche that I don’t think works anymore – it was already played out when Burton used it in BATMAN RETURNS 20 years ago next month – but it’s always the good guy recording the bad guy and that’s how he saves the day. This has gotta be the first time where the villain is the one recording the confession of the hero. But that’s because heroes usually don’t have a bunch of murders to confess to. Maybe this is a nod to or a result of the serial nature of the soap operas, that they gotta keep the story going every day for years so the super villain eventually becomes the good guy, the nice girl becomes a serial killer, the rapist becomes the love interest, the dead person comes back to life.

The internet is known for housing the fiercest fans of everything in existence, and these fans demand over-literal faithfulness in adaptations of their favorite comic strips, books, TV shows and what not. That’s nice, but I call bullshit on most of the people trying to be purists about a fucking 1960s soap opera. I think some people are exaggerating their connection to this show because it’s their natural reflex to get up in arms about anything that used to be a thing and now is another thing. I don’t know, are there alot of women in their 50s mixing it up with Danny Glover’s Dickblood on the Ain’t It Cool talkbacks? I’m not sure how many of these people have ever seen this show. But Burton and Depp actually did obsess over it as kids, that’s why they wanted to make a movie out of it, and I think this gives them more right to it than most inhabitants of the modern world.

If it was Days of Our Lives though that would be a different story.

based on a TV show Chloe Grace Moretz Eva Green ghosts Helena Bonham Carter Jackie Earle Haley Johnny Depp Michelle Pfeiffer Tim Burton vampires
This entry was posted on Tuesday, May 22nd, 2012 at 1:43 pm and is filed under Comedy/Laffs, Horror, Reviews. You can follow any responses to this entry through the RSS 2.0 feed. You can skip to the end and leave a response. Pinging is currently not allowed.