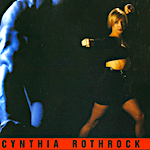 The biggest surprise about this movie is that after the opening it’s never relevant or mentioned that she’s a high school teacher. I was so confused by it that I reloaded the DVD two different times thinking I must’ve misinterpreted something. But it’s true – she has a classroom, a chalkboard, she leaves with papers to grade, she runs into a student named Paris (Patrick Malone, THE BONFIRE OF THE VANITIES) and gives him his paper, she seems to be his history teacher. It’s too bad they didn’t stick with the idea, because a Rothrock version of THE SUBSTITUTE or ONLY THE STRONG would be right up my alley. She really does seem like a cool teacher. END_OF_DOCUMENT_TOKEN_TO_BE_REPLACED