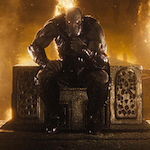 One small complication: it didn’t exist. Snyder had left before he was able to finish the movie, as had been reported all along. So they invested a reported $70 million (more than the entire budget of Marvel’s THE NEW MUTANTS) for Snyder to complete the FX and the edit, add a couple new things and a new score. And since who gives a fuck anymore they let him pretty much do what he wanted this time, and what he wanted was to make it 4 hours long (about 14 minutes longer than LAWRENCE OF ARABIA) and in a 4:3 aspect ratio as an homage to MID90S and MEEK’S CUTOFF. END_OF_DOCUMENT_TOKEN_TO_BE_REPLACED