But the other important factor at play here is that while Dante came up under Roger Corman he’s more of a goofball and cartoon nerd than a horror master. So his monsters are vicious bastards but also funny. Like the martians in MARS ATTACKS! they seem to live more to fuck with us than to kill us. And they plan to do both.
END_OF_DOCUMENT_TOKEN_TO_BE_REPLACED 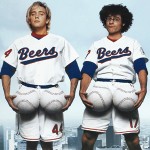 TEAM AMERICA is pretty much your typical moronic jingoistic action nonsense. The ultimate big budget, small brained hollywood summer action July 4th blockbuster. The movie you saw and couldn’t believe anybody liked but somehow everybody liked it and it made a bazillion dollars and the next summer everybody pretended it was somebody else who liked it. It’s pretty much that movie, except sarcastic, and done entireley with creepy looking marionettes like on that old TV show THUNDERBIRDS. That might be a comment about the wooden characterization and emotion in big action movies, and the way they treat sometimes respectable actors as props to move around and set up in front of explosions. But more likely it’s just because puppets are funny. It’s funny to watch them do stuff, because they’re puppets.

The first third or so of this movie is the hardest I’ve laughed in a long time. The opening credits are these overblown 3-D metallic letters that fly at the camera and then blow up, and you know right there that these filmatists know their Jerry Bruckheimer. What’s really impressive about the movie is the incredible attention to detail about all the cliches of action movies. They got every shot, every corny line, every montage, every subplot of a dumb action movie. They introduce and reintroduce bad guys exactly the same way they do in the real movies. They use the same angles and lighting and music cues. It’s just different because they’re these goofy bigheaded dolls and they walk funny. END_OF_DOCUMENT_TOKEN_TO_BE_REPLACED