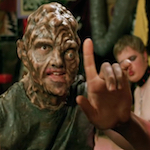 By now Troma had become some sort of institution, with a younger generation working for them for little or no pay because they grew up on the movies. It was also a harder time to create humor more tasteless than what was popular. Kids had seen Tom Green pretend to hump a dead moose on cable, the whole world had been charmed by Cameron Diaz with semen in her hair, and Jackass started airing a month before CITIZEN TOXIE came out. In 1996 Troma had given a limited release to a 1993 indie called ALFRED PACKER: THE MUSICAL (retitled CANNIBAL! THE MUSICAL) by young filmmakers Trey Parker & Matt Stone. The following year, Parker & Stone’s South Park started on Comedy Central and became a pop culture phenomenon. It was during South Park season 4, while the two Troma-boys-made-big were being canonized as the edgy provocateurs and envelope-pushing satirists of their era, that the fourth TOXIC AVENGER movie finally hit the screen. END_OF_DOCUMENT_TOKEN_TO_BE_REPLACED