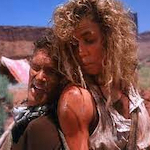 At the end of last month we lost Albert Pyun, prolific and perhaps infamous b-movie auteur, chronicler of kickboxing cyborgs, mounter of simultaneous productions, and occasional blurrer of lines between drive-in exploitation and abstruse art movie.

I did not always have generous things to say about his films, but something about them kept me coming back, so over the years I’ve reviewed DANGEROUSLY CLOSE, CYBORG, CAPTAIN AMERICA, KICKBOXER 2: THE ROAD BACK, NEMESIS, KICKBOXER 4: THE AGGRESSOR, and MEAN GUNS, and of course I have chapter in Seagalogy about his Seagal movie, TICKER.

When I reviewed KICKBOXER 2 back in 2009 the man himself showed up in the comments and thanked me for the review, even though it included the line, “The director is Albert Pyun, but I never would’ve guessed that because it’s both watchable and kind of good.” He had a very gracious and self-deprecating attitude, promising “I hope I am improving to at least an almost semi-coherent level of competence,” and he came back a few times responding to questions and comments. Too bad he dodged my question about how he made it look like a dead Van Damme in KICKBOXER 2 (claiming it was someone who died from watching the beginning of ALIEN FROM L.A.). END_OF_DOCUMENT_TOKEN_TO_BE_REPLACED