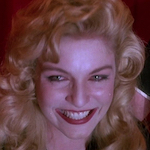 And at first it really does fit into the indie releases of ’92 – it makes sense as a contemporary of NIGHT ON EARTH, ONE FALSE MOVE, RUBIN & ED, and JOHNNY SUEDE. It tells the story of FBI Regional Bureau Chief Gordon Cole (David Lynch, ZELLY AND ME) teaming up stoic veteran Special Agent Chester Desmond (Chris Isaak, MARRIED TO THE MOB) and nerdy bow tie wearing rookie Sam Stanley (Kiefer Sutherland, RENEGADES) to investigate the murder of a teenager named Teresa Banks (Pamela Gidley, CHERRY 2000, HIGHWAY TO HELL) in the small town of Deer Meadow, Washington. END_OF_DOCUMENT_TOKEN_TO_BE_REPLACED