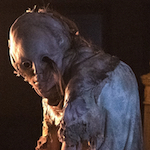 I personally wasn’t looking for a reboot (in the original sense of the word – actually starting over fresh) as a straight horror movie. But it makes sense, since, from what I understand, that’s what the video games that inspired the movies were like. (In fact, George Romero directed a commercial for the video game and was attached to a movie version well before Anderson.) And I’m happy to report that in contrast to the first RESIDENT EVIL (one of the only entries in the series I didn’t much enjoy) this new one called RESIDENT EVIL: WELCOME TO RACCOON CITY is actually a pretty good little horror movie. END_OF_DOCUMENT_TOKEN_TO_BE_REPLACED