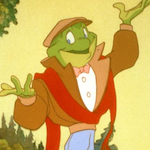 Now let’s move on to two more distinctly befuddling animated features released, unsurprisingly, in August, the month of misfit movies. LITTLE NEMO: ADVENTURES IN SLUMBERLAND (onscreen title: just LITTLE NEMO) is a long-in-the-works Japanese-American co-production. It was a 1989 release in Japan, but we got it on August 21st, 1992. END_OF_DOCUMENT_TOKEN_TO_BE_REPLACED