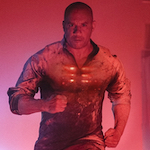 In many ways Diesel is a throwback. Some people think he’s arrogant and dumb, and that perception (whether true or false) connects him with the action icons of the ‘80s and ‘90s. So does his vanity when it comes to his bodybuilding and the outsized awesomeness of his characters (both in battle and in love). But beneath the macho posturing is a sincere passion for what he sees as the integrity of his creations, for better or worse. He has left and returned to two franchises of his own accord. He’s turned his supporting character in a minor cult movie into an improbable sci-fi franchise, at one point mortgaging his house to somehow keep it going. He’s adapted his Dungeons & Dragons character into a major motion picture. With one performance he turned a silly drag race exploitation movie into a smash hit, and with 20 years of diligence he shepherded its sequels into a massive pop culture institution. So even something like BLOODSHOT – which looked pretty cheesy and lost a ton of shine when the JOHN WICK directors left and a guy who previously just worked in video games (David S.F. Wilson) took over – is an event for me. END_OF_DOCUMENT_TOKEN_TO_BE_REPLACED