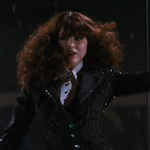 Of course, the auditions are hard, and she fails to impress the openly snobbish admissions guy (Gordon Tanner, HOME ALONE: THE HOLIDAY HEIST). To be fair, her standard hip hop moves don’t seem impressive, but he really should be more friendly when giving her the terrible advice to be “softer, more sensual and feminine.” END_OF_DOCUMENT_TOKEN_TO_BE_REPLACED