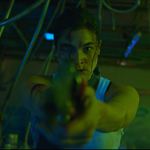 I’m not just talking about copycats. They might even become classics in their own right. Case in point: the amazing 2018 Philippine drug raid epic BUYBUST, which would’ve definitely made my best of the year write-up if I’d seen it in time. It’s kind of like THE RAID meets ELITE SQUAD. A highly trained team of drug enforcement agents go into a favela-like part of town tailing an informant (Alex Calleja) who is wearing a wire for a transaction with the vicious druglord Chongki (Levi Ignacio) in an attempt to draw out his boss, the elusive Biggie Chen (Arjo Atayde). It turns out to be a setup, the drug gang guns down most of the team and the surviving agents have a long, grueling night battling their way through endless attackers in a labyrinth of narrow, crowded passages and corrugated roofing while trying to figure out who betrayed them and where to find Biggie. END_OF_DOCUMENT_TOKEN_TO_BE_REPLACED