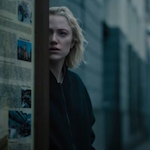 WATCHER – not to be confused with the Netflix show The Watcher or the Keanu Reeves movie THE WATCHER or the early UPN anthology series hosted by Sir Mix-a-Lot The Watcher – is an excellent psychological horror/suspense thriller that’s a Shudder exclusive and also came out on blu-ray and DVD a few weeks ago. Maika Monroe (INDEPENDENCE DAY: RESURGENCE) stars as Julia, a young woman who moves to an apartment in Bucharest with her husband Francis (Karl Glusman, THE NEON DEMON).

Francis is American, but his mother is Romanian, and he speaks the language, but Julia doesn’t. So she’s immediately out of sorts from having to have her husband translate what people say to her as well as to speak for her. Then the very first thing she sees when they pull up to their building is a creepy guy (Burn Gorman, PACIFIC RIM) looking out a window across the street. Of course their apartment has a huge window facing right at this dude, but at first she doesn’t worry too much about it.

It’s a great looking movie with a real strong mood. That first night she can’t sleep, sits in the dark, faint yellow light projecting onto the walls through the torrential rain cascading down the window, looking out at that dude looking out at her. (Was gonna share a screenshot, but I guess Shudder won’t let me do that anymore.) It’s the oldest trick in the horror book, but cinematographer Benjamin Kirk Nielsen creates that feeling of being watched by setting the camera outside of rooms or ever so slowly pulling out the window. The paranoia of the filmatism reflects Julia’s state of mind after a serial killer kills a woman in an apartment down the street and she sees an interview with a survivor who describes being watched and followed before the attack. 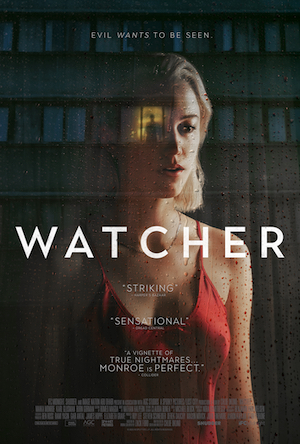 She spends her days just chillin’ – shopping, going to a matinee of CHARADE on a whim (these movie characters always walk into a classic movie already in progress, don’t they?) She gets freaked out when a man comes in later than her and sits directly behind her, so she abruptly leaves, and then believes she sees the same man at the grocery store across the street. It freaks her out enough that she hides in the employees only area.

She hesitates to tell Francis what happened, but when she does he takes it seriously. They go back to the store and convince an employee to show them the security video. They call the police and get an officer to go talk to the guy across the street. Everyone has the same pattern: look at her like she’s out of her mind, then try to do what she wants in case she’s right, then lean toward not believing her again. She doesn’t have much evidence.

Luckily for her sanity Julia makes one friend, the next door neighbor Irina (Madalina Anea, “Anna’s Friend 2,” THE PROTEGE). As soon as I saw her I thought oh no, poor neighbor lady. R.I.P. And yet it still got me to invest in their friendship. She gives Julia some real support, along with setting up some effective thriller elements – for example, the first thing they discuss is whether or not they can hear each other through the wall. We know that will come back, and we enjoy and/or are unsettled by the anticipation.

WATCHER goes through a whole catalog of basic scary situations: being watched, being followed, not being believed, a sudden loud knock on the apartment door, going into a strange building to knock on a stranger’s door, hearing a disturbing sound from next doorand not being able to get ahold of your neighbor, being hated by your neighbors and landlord, empty subway stations at night, encounters in subway cars at night. It’s not all passive – at one point she sees the guy from the store and she starts following him. The movie is a succinct 96 minutes but the question of whether or not this is really the guy is left unanswered long enough that I honestly started to think “What if this doesn’t even turn into a horror movie? Will that ruin it?” I won’t say what happens (see post-script for spoiler ending discussion), but I’ll say that nothing ruins it. It ends just right.

Julia doesn’t have a job or seem to be looking for one, and there’s one scene where it comes up at a dinner party that she used to be an actress. All she says about it is that she decided it wasn’t for her. I wondered if there would be a backstory about being scared out of the business by a stalker, but that doesn’t happen. So the theory I settled on for the significance of that detail is that she did not actually decide acting wasn’t for her. She decided to sacrifice her career for her husband’s, and that’s how she explains it. She says it in the same way that she keeps saying it’s fine, I’m okay whenever he notices something is wrong. She’s not okay, but she doesn’t want to trouble anyone until she has no other choice.

Julia’s failure to get her husband or the police to accept what she knows to be true could be seen as a timely theme, since post-Me-Too many have become more aware of the phenomenon of women not being believed. But it also happens to be a timeless horror element used in many classics, such as A NIGHTMARE ON ELM STREET. Admittedly it hasn’t been portrayed as specifically gender-based – it’s usually more a matter of parents and police not taking young people seriously – but it’s still based in the same fear of wanting help, but being treated as crazy, and realizing you’re on your own. At any rate, to me it doesn’t play like a message in WATCHER – more like a truth that happens to come out from having characters behave believably.

When I looked up Monroe on Wikipedia I was surprised to see her described as “an American actress and professional kiteboarder.” The more you know! Always looking for the next kiteboarder who could transition into movies. Anyway, I was thinking about her having been in THE GUEST, IT FOLLOWS, and this, plus some other horror-ish ones I haven’t seen yet (GRETA, VILLAINS, SIGNIFICANT OTHER), and I wondered how many it takes to be a horror icon these days. Like, she doesn’t at all seem like she would specialize in horror, but here she is. In the old days they might’ve called her a “Scream Queen,” but even if that wasn’t condescending it wouldn’t be accurate to what she does. Anyway, my point is that she does good work, and she’s particularly great in this. The movie is very much on her shoulders, and so much of it is on her face, alone in the apartment.

Director Chloe Okuno did a segment of last year’s V/H/S/94 and weirdly was the first director attached to that other movie I just reviewed, BODIES BODIES BODIES. If she left that to do this then I’d say everything worked out great. She gets a “written for the screen by” credit after I guess rewriting a script by Zack Ford (SCAR).

If you enjoy a simple, straight forward, elegantly crafted suspense yarn, WATCHER is a damn good one. 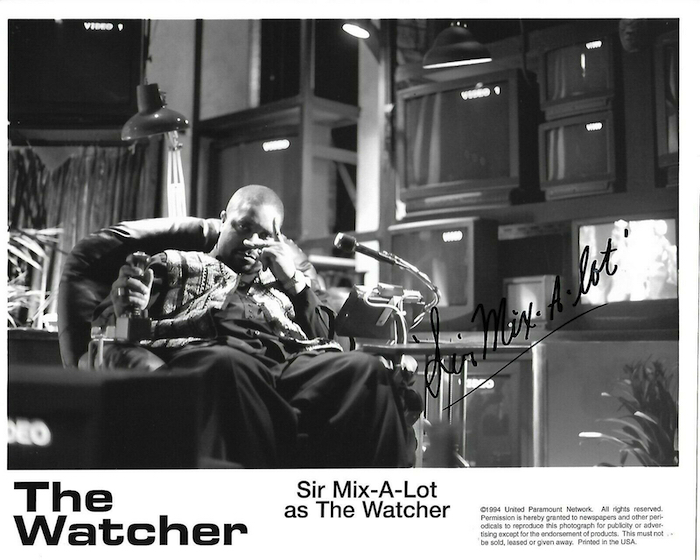 P.S.
SPECIAL ENDING SPOILERS SECTION TO DISCUSS HOW THIS IS CONSTRUCTED

One thing I really like is how simple it turns out to be – she thinks this guy across the street is watching her, she thinks this guy at the theater/grocery store is the guy watching her, also she thinks it’s the serial killer. And she’s correct on all three counts! Other than a brief moment early on where she turns to a guy behind her on the sidewalk and he walks right past her, there’s none of the usual thriller contrivances – no fake out or mistake or twist at any point. There’s not the part where it’s a misunderstanding and actually the guy in the store wasn’t following her, so when she realizes it she lets her guard down but then a different guy jumps out and attacks her.

No, her instincts are correct the whole time, and yet it was able to keep me guessing the whole time. I have to admit that if I were the husband I might also question her assumptions, like a dumb asshole. I love how it ends by only addressing that with the look on her face. The do-you-fucking-believe-me-now!? vindication, with no sense of whether their relationship can be repaired or not. She finally asked for the help she needed, instead of putting it on herself, but she didn’t get. Still, she took care of it. I don’t know what happens next, but I can’t see her telling Francis it’s fine, she’s okay.

Burn Gorman Chloe Okuno Karl Glusman Madalina Anea Maika Monroe
This entry was posted on Friday, October 21st, 2022 at 2:37 pm and is filed under Horror, Reviews, Thriller. You can follow any responses to this entry through the RSS 2.0 feed. You can skip to the end and leave a response. Pinging is currently not allowed.