While Susan goes into the other room to cut two giant pieces of cake for her and the boy, Harold comes in and breaks the kid’s neck and hangs him from a coatrack.

19 years later that little girl has grown into Playboy Playmate Barbi Benton, who has to stop by the hospital to pick up some test results from a routine physical. But there is nothing routine about, etc.

I’m sorry baby. It was all my fault. I coulda treated you better. Come back, baby. 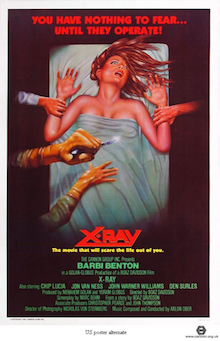 Right from the beginning HOSPITAL MASSACRE starts piling on ridiculous fake-out scares. Susan gets on an elevator with what looks to us like a propped up dead body dripping blood… but she recognizes it as what it really is: a dude who fell asleep standing up (?) while holding a drippy hamburger. Still, there is scary music playing as she wipes ketchup from the toe of one of her white pumps.  Then there’s a guy carrying two dead bodies… but they’re actually just dummies. But then he sees a puddle of blood… but it’s actually a spilled paint bucket. That type of shit.

There is a killer loose though, a guy wearing doctor’s scrubs and a surgical mask which he dramatically sucks in as he inhales. Kind of a show off, in my opinion. He kills the doctor that Susan’s supposed to go see.

You could argue that the death of her doctor is why Susan gets stuck in the hospital, but in my opinion the main reason is this hospital’s screwy procedure. If you have to go pick up some test results there’s a desk you go to, right? You probly gotta look on the big directory and figure out what floor to go to and if you get lost there’s an info desk. But this hospital apparently makes it more difficult. Instead of going to a specific location you have to go to a specific person. This girl’s just wandering around poking her head into different places asking if anybody’s seen her doctor. Eventually she finds an intern who looks at her x-rays, seems disturbed and brings her to another doctor. He makes her wait in his office while he leaves, then sends two nurses to come get her and bring her to a different office. Then he makes her get undressed so he can examine her.

This is the creepiest, sleaziest part of the movie because first the doctor watches her silhouette as she sexily undresses behind a screen. Then there are long, drawn out close-ups of his hands gently “examining” her, with special attention paid to her panty area and below her breasts. But, see, they don’t shoot her like she’s vulnerable, like it’s trying to remind you of the helplessness of being a patient. It’s more like “we gotta get a good shot of these nipples.” So if you enjoy watching doctors get off on checking for lumps, you’ll love this.

And if I may SPOILER, this molester doctor does not turn out to be the killer. He’s just a doctor. It’s one of those movies that throws in a little part where every character does something weird so that you think they might be the killer. There’s the other patient in the hospital who spies on the naked examination (there’s a window!), the weirdo bearded doctor who waits creepily behind her to use the phone, the doctor who fondles a handkerchief after he talks to her, etc.

Then they tell her she has to stay there because of “some discrepancies in the tests.” She came in just to pick up a piece of paper, now they won’t let her leave and won’t even tell her why. Things get weirder and weirder the longer she stays, and there are implications that it’s turning into something arguably more interesting than a normal slasher movie. Did the doctors notice something on her x-ray? Why are they keeping her here? At one point she finds a severed head in a hat box, then when she goes to show it to somebody there’s a cake in there, so is any of this even real?

But the slasher movie mechanics, the chases and things like that, are pretty crappy. I’m not the pickiest person about victims in these movies doing dumb things, I figure in real life if I was being chased I might make some mistakes myself. But these aren’t relatable mistakes, they’re just forced behavior to make the character get killed. When a killer is walking slowly down a hallway holding up a sheet to freak you out, why not run away as fast as you can? I think it would work better than the “keep turning around and screaming ‘HELP MEEEEE!!!'” technique that a nurse uses instead.

Susan gets real lucky though, because when she’s struggling with the killer she finds a big pitcher of liquid labeled “FLAMMABLE” that she’s able to dump on his head. I guess they figured since it was on the top shelf it didn’t need a lid on it. Stuff on top shelves never catches fire or spills.

The characters are one dimensional at best. The script is very simplistic, full of tired cliches but without even any detail to flesh them out, and doesn’t make alot of sense. If I understand correctly nothing ever happened to this Harold kid for murdering the other kid, and I’m not sure if Susan even remembered it happening until confronted with it. It’s like she so doesn’t want to be his Valentine that even his murder in her house didn’t make much of an impression.

“Remember me? Harold? You crumpled up my Valentine so I broke that kid’s neck and hung him in your living room? Probly traumatized you for life?”
“No… not ringing a bell. This was my house, you say?”
“Yeah, you were gonna eat cake, and I was outside the window smiling all evil and everything.”
“Well I’m sorry Henry, I just don’t have a good memory for that type of stuff. But it’s nice to meet you.”

As soon as the killer is dead it just cuts to her all dressed leaving the hospital and her son and husband are waiting outside for her and everybody smiles. It’s more like she went on a trip than got kidnapped, molested, chased and nearly killed and then had to light a guy on fire and knock him off a tall building. (That part was cool, by the way.)

The lighting is dark and muddy, but it’s only on VHS, so it’ll probly seem better if they ever remaster it.

Not that much better though.

This was the American debut of Boaz Davidson, but he was an experienced director who’d done several movies in Israel including the influential sex comedy LEMON POPSICLE. He immediately followed HOSPITAL MASSACRE with THE LAST AMERICAN VIRGIN, and has since become a prolific DTV producer. Because of that he gets alot of story credits, including on Isaac Florentine’s US SEALS 2, UNDISPUTED II and NINJA. Also BUNRAKU. And, uh, MANSQUITO. And SHARKMAN. And MORPHMAN. And THE SNAKE KING. And MEGASNAKE. And OCTOPUS 2: RIVER OF FEAR. And… (this seriously could go on for a while, but you get the idea.)

Boaz Davidson Cannon Films holiday horror slashers Valentine's Day
This entry was posted on Sunday, February 12th, 2012 at 12:29 pm and is filed under Horror, Reviews. You can follow any responses to this entry through the RSS 2.0 feed. You can skip to the end and leave a response. Pinging is currently not allowed.