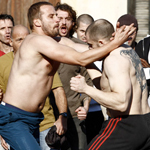 2) Stephanie gets her legs bit off by a fuckin orca

Well, maybe not bit off. She does lose them in a Marine World killer whale show accident. Maybe they get crushed by the collapsing stage, but maybe they get bit off. It’s one of those ambiguous “were her legs bit off by an orca or were they simply amputated as a direct result of an accident involving orcas” type of movies. To make you think.

Life as a killer whale trainer doesn’t seem great even when she has those legs. We first see her drunk at a night club getting bloody from a fight. Alain meets her because he’s working as a bouncer, he punches a guy for her and gives her a ride home. She hates her boyfriend, who seems like an asshole, but we don’t really know anything about him and can understand why he’d not be that friendly when she comes home drunk from a club with another dude. I’d say it’s possible he’s a total sweetheart, but since we never see him again it’s a fair assumption that he ditches her like a coward because of the accident. 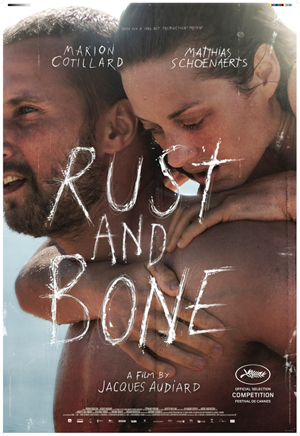 Alain is a total fuckup. He drifts into town with his son, complaining that the mother used the kid to transport drugs. Alain doesn’t do that, but does involve the little guy in shoplifting. Then he tries these legit jobs and sticks with this security one even when his boss turns out to have some ethical problems. These are forgivable sins, he’s providing for his son. But he ignores the kid, tells him to shut up, throws him and hits his head against a couch, doesn’t even seem to feel about about it. This guy sucks.

But he helps Stephanie in his own unique asshole type of way. He spends time with her, brings her to the beach, carries her into the water, which is very therapeutic. If it wasn’t for him she’d probly sit at home thinking horribly about herself. He gets her to start living again. He’s still a really, really shitty boyfriend who doesn’t appear to have any clue how to pay attention to her feelings, but having him as a fuck friend at least is an important step for her. She has no legs! He makes her feel like a woman again. She tries to dance again. She even works with orcas again.

I don’t want to imply that this is some kind of freaky fetish movie, but a few years ago when I reviewed I KNOW WHO KILLED ME, in which Lindsay Lohan plays a sexy amputee, I wrote:

“There’s a scene where, to prove that she’s the bad girl and not the goodie two shoes she’s been mistaken for, Dakota fucks Aubrey’s boyfriend six ways to Sunday. But it’s carefully framed so as to never once show her stumps. Man, think of all the fetishists that came THIS CLOSE to hitting paydirt on that one. You know there’s gotta be some poor pervert out there with a thing for Lindsay Lohan and for stumps. When’s that gonna come up again? Not for a while. My condolences, fella.”

Well, I gotta believe there’s a chance that the “fella” in that hypothetical scenario still harbors his boner for amputees, but has grown out of his Lohan crush and into a thing for Marion Cotillard. And I dearly hope that is the case because merry Christmas, my perverted friend. This one does have some sex scenes with full stump. Tasteful, but visible. The French have your back.

Anyway, this Stephanie must have a thing for bad boys and danger and shit. It’s mentioned that Alain used to box and kickbox, and then he gets involved in this underground fighting circuit. Isn’t it weird that this is an underground fighting movie and the title sounds so similar to a recent champion of the genre, BLOOD AND BONE? Is this a reverse Asylum movie, an arthouse title they want you to get on accident when you’re reaching for the meat and potatoes DTV one? Yes, I think it is. But obviously the title would work better for a modern rip-off of TOP DOG. Schoenaerts is LAPD Homicide detective Jack Rust, Cotillard is the veterinarian he’s trying to impress by working a case with a CGI dog.

Alain can use the money from brawling, but mostly he just likes to fight. These scenes work on a different level than BLOOD AND BONE. (Not better, different.) The atmosphere is so scummy. They take place in a backyard like those Kimbo Slice youtube videos, which I’m sure the filmatists studied.

There’s no way these people are getting proper medical care. She waits in the car and watches. It’s horrifying. I’m pretty sure she likes it, though.

(Incidentally, don’t be looking for clear action or choreography. It feels like real brawling that you just get a glimpse of. It’s not meant as an action movie and doesn’t need to be, that’s why I am not giving it an Action Comprehensibility Rating.)

Alain excites her, but he also makes her feel like shit. One night they go to the club with some other people from the fights. She has prosthetic legs now, and obviously feels self conscious about it. Instead of being patient with her he starts dancing with some flirty blond. When he decides to leave with the blond he says goodbye to Stephanie, pretending like this was expected, like they were just casual friends who came as part of a group. “You’re leaving?” she asks. Her voice betrays her heartbreak, but she plays along. Yeah, I’m fine. I’ll sit here by myself and drink through a straw. No problem.

That’s what’s great about the movie: the little moments are so authentic. When you think about everything that happens it seems pretty outlandish. Underground fighting, killer whale attack, at the end there’s another unlikely disaster. I thought at any moment somebody might get struck by lighting or a falling bullet that somebody shot up in the air at a wedding celebration on the other side of town. But the look and the performances and dialogue are all so natural and real that it feels like the whole enterprise is.

Not that it’s important, but the Lieutenant Dan effects on her are flawless. First they give her stumps, then metal legs, and she gets the walk right and everything. It’s always interesting to see effects this good in a non-genre movie. You forget they’re effects. I think they are though. That would be fucked up if she gave up her legs for this role, like how Jamie Foxx fucked up his teeth for that one where he was a homeless cello player. This one’s a good movie but not worth that kind of sacrifice. Still, I respect her decision if that’s what she did.

Even if she didn’t this is a really commendable performance. She makes us feel so much trouble and pain and barely uses any of the hysterics that are the usual tool for an actor portraying someone overcoming a horrible malady. Even the scene where she finds out she lost her legs is kinda restrained compared to what it could’ve been. And that’s probly the only scene they could’ve used for the Oscar clip if they’d nominated her. Having seen this now I know how right people were to say she got snubbed. This is a tough lady though, I think she can handle a mere snubbing.

Director/co-writer Jacques Audiard is the guy who did A PROPHET, highly acclaimed gangster type movie from ’09. Alot of people recommended that to me, I did see it and thought it was good and really well made, but I didn’t feel like I had enough to say about it to write a review at the time. To be honest it then disappeared out of my head and I barely remember what it was even about. This one made more of an impression on me, but obviously using an orca could be considered a cheat.

Based on these two movies I assumed Audiard was part of a younger crop of hipster directors, but the guy is actually about 60 and wrote his first movie in ’74. His pops, Michel Audiard, was also a screenwriter and sometimes director. He has well over a hundred credits on IMDb, one of them for that movie DOG DAY with Lee Marvin.

There’s an odd cultural difference I noticed in R&B. The point where Alain gets in the most trouble is when it’s found out that he and his boss have been installing cameras for employers that want to spy on their workers to make sure they’re not stealing or fuckin around. It’s a huge scandal. The workers at the businesses treat him like a rapist, his sister gets fired because of it and is infuriated at him, he’s shamed the family. In the U.S. I don’t think that’s even illegal. I mean I think the French are right to treat it that way, but it wouldn’t be such a big deal here, unfortunately.

I don’t think this is necessarily a wrong choice, but it threw me off how not-sympathetic he turns out to be. After he hits his son he seems irredeemable, then it’s worse when he just takes off and leaves the poor kid behind like an old piece of furniture that’s too hard to move. That’s the worst thing he does in the whole movie and then it skips right from there to later on when he’s apparently forgiven and straightening out his life. I think it’s intentional and it’s interesting that it leaves out alot of the drama and character growth that normal movies are about. But it feels weird, I have to admit. I don’t think I was completely ready for it.

I’m with Rust all the way. Bone is an asshole. I don’t care if he gets into the Olympics.

amputee French Jacques Audiard Marion Cotillard Matthias Schoenaerts orcas underground fighting
This entry was posted on Thursday, April 18th, 2013 at 1:16 am and is filed under Drama, Reviews. You can follow any responses to this entry through the RSS 2.0 feed. You can skip to the end and leave a response. Pinging is currently not allowed.

21 Responses to “Rust and Bone”