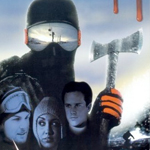 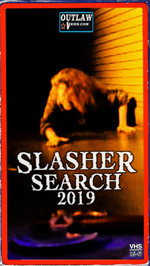 It’s about a mysterious skier (disguised only by normal ski gear) who murders snowboarders who trespass in a closed pass where a fatal accident once happened. Like my other recent 2003 Slasher Search entry, SIMON SAYS, it has a vanload of young people on a trip, slathering the screen with unadulterated obnoxiousness. The stuck up/aggressive girl is trip-arranger Kimberly Van Arx (Lindsey McKeon, Saved by the Bell: The New Class), whose rich dad is buying the resort, and has a quick trigger finger when it comes to asserting “do you know who I am!?” privileges. Her boyfriend Cole (Scott Weinger) seems kind of square and has a has kind of a Steve-on-90210 older-out-of-place-guy vibe. I was excited to learn that he’s the guy who did the voice of Disney’s Aladdin!

The only character who seems fairly likable early on is Pike (Juleah Weikel, one episode of 7th Heaven). She spends much of her time pouting at what the other people are doing, but that’s less annoying than participating, and she has that Final Girl quality of being the only one who notices bad shit going down while everybody else is practicing the Hakuna Matata philosophy. 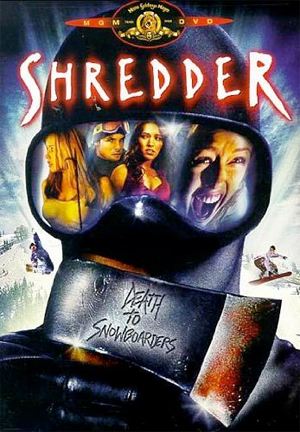 It follows all the common slasher tropes, for good and ill. The scene where the young women unbutton their shirts and act flirtatious with the sheriff (one time actor Seth Reston) to stop him from kicking them out is pretty painful. But for the most part director Greg Huson (DECAF, editor of some Playboy videos) and his co-writer Craig Donald Carlson (electrician, PINOCCHIO’S REVENGE) follow the tradition of combining a time honored template (young people trespass in place where a death occurred, they separate, they don’t realize at first that an unseen murderer is picking them off one by one in fanciful ways, they learn more about the past incident as various suspects and possible motives become apparent leading up to the inevitable unmasking and final confrontation) with their chosen theme (snowboarding). As always happens when this is done with enough competence and a decent gimmick, lowbrow fun ensues.

Part of that is decent production value. It’s not stylish or anything, but it was filmed on location at a real ski resort in Idaho, so there’s real snow and some stunts on snowboards, skis, a ski lift, a snowmobile and a snow plow. And there’s a good amount of blood. It utilizes such location-appropriate murder weapons as a wire (snowboarder runs into it and gets beheaded), a ski lift (a character’s scarf gets caught and she hangs!), an icicle, an ax, a shovel, a fire poker, a ski pole.

When the cast has been whittled down and it’s time for the showdown, it moves pretty good. On the negative side, obvious Final Girl Pike (SPOILER) seems to be dead, leaving the dorky Cole to save the day. On the other hand it’s pretty funny how he lures in the killer. Having determined they’re being targeted for breaking a list of ski resort rules, he tries to attract attention by going on the ski lift and yelling about not having his belt on and littering and stuff. But suddenly the lift is turned off. “Oops,” he says, apparently having cast himself in that Adam Green movie FROZEN.

But then he steels himself to drop in and land safely on his board by yelling “Extreme sports!”

The reveal of the killer is fine (neither shocking or too ridiculous), but the finale is pretty good. The killer (SPOILER ABOUT HOW THE KILLER DIES [OR DOES S/HE?]) goes in one end of a snow plow as a solid, comes out the other end in another form entirely. Pretty good pay off.

I wish I could find out more about this one. The news links on its IMDb page are mostly NINJA TURTLES related (because Shredder), plus a no-longer-there article on Dread Central calling it “the Nadir of Slasher Flicks.” I noticed on the end credits that while some casting was done in L.A., they also did some here in Seattle (and my research informs me director Huson grew up in Sammammish, Washington and graduated from WSU). Wikipedia says SHREDDER had “a limited theatrical release in the Pacific Northwest,” wherever that means. 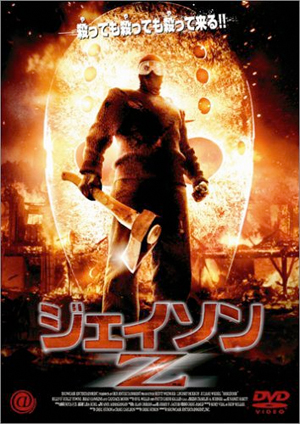 The one funny bit of trivia is that, if IMDb can be trusted, SHREDDER was released in Japan as JASON Z. At right we see what is apparently the poster, with the the evil skier standing in kind of a Jason pose, to cash in on JASON X. There is no actual hockey mask in SHREDDER, but hey – ice, snow. I guess there’s a connection there.

The big mystery: was JASON X bigger in Japan?

Billy O' Brad Hawkins Greg Huson Lindsey McKeon Scott Weinger Slasher Search slashers snowboarding
This entry was posted on Monday, October 28th, 2019 at 9:09 am and is filed under Horror, Reviews. You can follow any responses to this entry through the RSS 2.0 feed. You can skip to the end and leave a response. Pinging is currently not allowed.