I didn’t even realize it until I started watching it, but LOVERS LANE is a cheapass slasher movie shot in the Seattle area. Mostly Issaquah, I think. Anna Faris, who grew up in nearby Edmonds, is in the movie (not her first, but Wikipedia calls it “her first significant role”). It was filmed in 1999, but seems more like an ’80s slasher.

Like MY BLOODY VALENTINE and HOSPITAL MASSACRE, this one begins with a horrible murder on Valentine’s Day, but it’s in 1988 instead of 1961. The movie opens with the cliche of all cliches, a couple making out in a car who hear a noise and it turns out to be a guy with a hook hand. The twist is that they don’t end up getting killed, they just find another couple that already got killed.

When Sheriff Tom Anderson (Matt Riedy) arrives on the scene he has his little daughter in the car, telling him about the Valentine she made for mommy. I’m not sure why he has her in the car in the middle of the night, or why he thinks it’s a good idea to bring her to the site of a horrible double murder, but I do know that it inspires the funniest line in the movie when he sees the flashing lights of the other police cars and muses, “You know it’s too bad all these pretty lights have to mean something bad happened.”

He’s trying to be a good father, but still manages to allow his daughter to see that it was her mother that was murdered. Whoops. Trauma, etc. 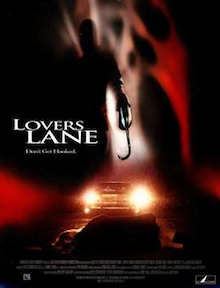 Then we skip to  Mandy (the daughter of the dead woman, played by Erin J. Dean), Michael (the son of the dead man, played by Riley Smith) and other high school students in the present (played by the year 1999). We know Mandy is sort of a misfit, because she sits by herself reading Nine Stories by J.D. Salinger. There is a bitchy girlfriend, a douchey guy (who became Faris’s first husband), and Faris is a cheerleader somehow even though she’s also the new girl in school. The only reason to make her the new girl is to have other characters explain things we need to know to her, but that only happens once or twice and then they forget about it. But they remember she’s a cheerleader; she wears the uniform all the time.

Because this is a real rookie type of movie they got some funny decorations in the school. For example I noticed a huge hand-painted banner in one of the halls that just said “DEBATE CLUB.” In a scene that takes place at a swim meet (or during swim practice?) there’s one that says “SWIM MEET.”

Meanwhile, the killer is in a mental hospital (no, no banner that says “MENTAL HOSPITAL”). And you may be surprised to hear this, but he kills somebody and escapes. In one of the movie’s few genuinely inspired touches he leaves a message on the wall in blood… but the message is just “PRISON FOOD SUCKS.” So I guess he has complaints that are not holiday-related. But the novelty of the scene is a little watered down in a later one when for some reason he writes “PRISON FOOD SUCKS” again on somebody’s refrigerator. Worse, he puts it on a piece of cardboard and attaches it to the refrigerator, like he would feel bad about vandalizing it.

Okay, so we have a killer on the loose, obviously we gotta get some kids to lover’s lane so he can kill them there. So at school Michael yells “Tonight, beers up, clothes off!” They go out there and get chased and get killed and hide in a barn, you know the drill. There’s one of those parts where they think they hear the killer sneaking up on them, but it turns out to just be an animal. Almost always it’s a cat, but in this case it’s a pig. What struck me about this scene is that Michael has a gun and shoots at the pig at close range and doesn’t hit him. So that adds some more tension of whether this kid can survive the killer or also if he will accidentally shoot off his own foot or his friend’s butt cheek or something.

The movies still believe that kids have a specific place they go to to make out in cars. I don’t believe that’s true. But I guess there’s that whole thing about gay guys hooking up with strangers at rest stops and airport bathrooms. I wonder if they’ll ever do a slasher movie about that.

There’s not any filmatistic skill on display here, so what entertainment is there comes from laughing at the awkward little touches that come from inexperienced filmatists failing to capture believable human experience in their script. I liked when they were being chased and got into somebody’s car and got mad that there weren’t keys in it, as if it would be normal for there to be keys in it. (Don’t worry, it’s a movie, so he knows how to hotwire, and also because it’s a movie the girl makes a comment about him knowing how to hotwire.)

When they try to turn him into a movie hero it’s kind of a mess too. He hits the killer with a baseball bat and knocks him over a split door and outside, then he says “Line drive, bitch!” But you see, that is clearly more of a home run, it went over the fences, outside of the park. Bad one-liner.

There’s a whole convoluted thing about how the kid doesn’t know his dad was murdered and the widow and widower don’t know that their spouses actually weren’t having an affair and the widow/mom is also the school principal and I’m pretty sure at some point she cut her long hair and had to wear a wig for reshoots. Possibly as a tribute to the sheriff’s fake mustache in the opening scene.

It gets really silly (and arguably most interesting) when it gets to the ending plot twists, where if I understand correctly there are actually three different killers. Along with the escaped mental patient there’s also the bitchy girlfriend and her dad, and the way they figure this out is they look in her house and see a dog-eared copy of a book called “Sexual Deviance: Father-Daughter Relationship” laying on a table. Also I guess her dad is the sheriff’s brother (?) ’cause he says “Little brother Tommy!” when he sees him.

The script is by Geof Miller (DEEPSTAR SIX, HOUSE IV) and Rory Veal (only wrote this, but has a photo and bio on IMDB [and the bio puts “shorts” and “cult” in quotes]). Director Jon Steven Ward only did one other narrative film, EQUAL IMPACT (1995) which is a taekwondo movie with twins, like DOUBLE IMPACT, except played by real twins instead of split-screened Van Dammes. I’m gonna have to rent that one. You don’t necessarily have to rent this one, though.

Anna Faris filmed in Seattle holiday horror slashers Valentine's Day
This entry was posted on Monday, February 13th, 2012 at 12:05 pm and is filed under Horror, Reviews. You can follow any responses to this entry through the RSS 2.0 feed. You can skip to the end and leave a response. Pinging is currently not allowed.