Get ready to get AVENGEMENTed

I must be moving up in the world because I actually got sent a press release about Samuel Goldwyn Films acquiring U.S. rights to “THE ACTION-PACKED FILM ‘AVENGEMENT’ STARRING SCOTT ADKINS.”

The important new information is that it will be released digitally on May 24th. It also says it’ll be in theaters that day, but I don’t know how many of our cities will benefit from that.

The other thing that most impressed me is that Adkins’ character is named CAIN BURGESS. Obviously we were all hoping for John Avengement, but the genre can definitely use more Cains and Kanes. We’ll see if Cain Burgess becomes the next Yuri Boyka.

AVENGEMENT is directed by Jesse V. Johnson, who I have noted is on an incredible role with SAVAGE DOG, ACCIDENT MAN, THE DEBT COLLECTOR and TRIPLE THREAT all in a row. He first directed Adkins way back in 2005’s PIT FIGHTER. The screenplay is by Johnson and Stu Smalls, which bodes well – Johnson wrote the excellent DEBT COLLECTOR, and Smalls is Adkins’ life long friend who co-wrote ACCIDENT MAN and has helped mold his dialogue for other scripts.

“While released on furlough from prison, a lowly criminal evades his guards and returns to his old haunts to take revenge on the people that made him a cold-hearted killer. It’s an epic, bloody battle to search for the soul he lost years ago on the streets of an unforgiving city.” 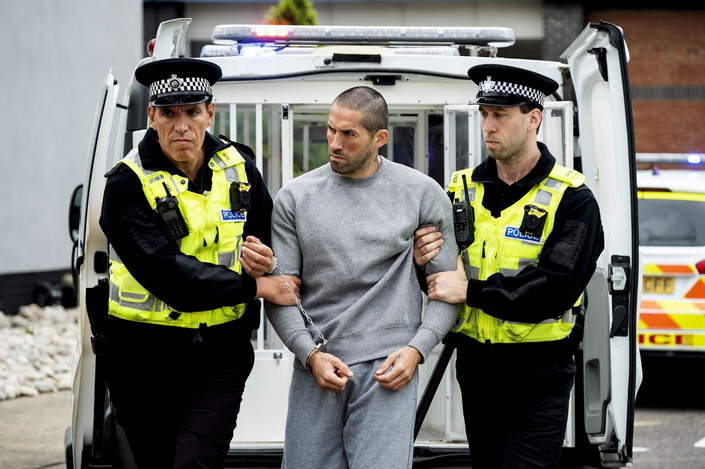 Johnson’s description of the character and story are intriguing. He calls Cain Burgess “both frightening and sympathetic” and “A man who has tempered his pain and rejection into a carbon steel tool for revenge.” And he claims that said revenge is “a satisfyingly baroque, almost elegant retribution.”

So we’ll find out what that’s all about in a few months, but we only have to wait until next week to see the latest from Johnson and Adkins (as the villain), TRIPLE THREAT. I’ll have a review of that for you tomorrow morning after the embargo lifts.

Jesse V. Johnson Scott Adkins
This entry was posted on Thursday, March 14th, 2019 at 2:14 pm and is filed under Blog Post (short for weblog). You can follow any responses to this entry through the RSS 2.0 feed. You can skip to the end and leave a response. Pinging is currently not allowed.

8 Responses to “Get ready to get AVENGEMENTed”