BUT, in my opinion Mr. Cube has some new magic now, some THE BARBERSHOP magic. This magic is not as powerful as FRIDAY magic but it’s still fairly magic, in my opinion. In a way. 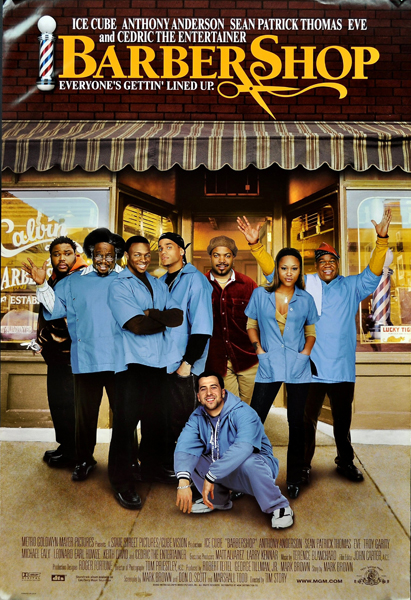 Now as far as I as a white man can figure, there are two major movements in the African-American comedies today. First of all you got the “hood comedies” which is basically the recapturing the magic movies I mentioned before, including the upcoming FRIDAY AFTER NEXT. And then you got the higher budgeted, upper class romantic type comedies, which usually are about a wedding and star Taye Diggs. In those movies there is less poo jokes, the characters have more emotional issues to deal with and also have conversations about topics important to the community and american culture. But they’re not as funny and the music is cheesier, unless they put an old Stevie Wonder or James Brown song on there.

What Ice Cube has managed to do in this one is combine the two movements by getting the producers of SOUL FOOD to make an Ice Cube movie. He plays a young man who has inherited a barbershop. The story takes place on the day when he fails to get a loan he needs and decides to sell the shop to a loan shark played by the great Keith David, then changes his mind when he finds Keith’s gonna turn it into a barbershop themed strip club.

The movie mostly takes place in the barbershop, so you got your FRIDAY style group of colorful neighborhood characters bickering and what not. There is also a subplot about Anthony Anderson, the big comic relief fella from the Joel Silver DMX movies, stealing an ATM machine. There is lots of humor such as: I dropped the ATM machine on my foot, it hurts, etc. This subplot constantly threatens to kill the movie. But the movie manages to escape.

Now I’m not saying this isn’t what I expected when I came in, but what I liked about the movie was the message about the importance of the barbershop. This theme feels less tagged on than the message you got in FRIDAY because you see the sense of community throughout the movie and it is easy to realize the importance of the barbershop. But it’s good to see a movie, especially one starring one of these rap singers, that says to care about something more important than money, or even loving some gal. This is a whole group of characters who are happy about a job because of its personal meaning to them despite it not bringing them money or status. It’s not all about the benjamins as the title of a recent bad Ice Cube picture tried to claim. Nice try all about the benjamins but I can see through your bullshit.

Also I thought this was a real good role for Mr. Ice Cube. He was the perfect straight man in FRIDAY and has failed sometimes when he tried to be more showy. Here he plays it straight again but it’s a different kind of character because he’s actually an authority figure. In FRIDAY he got fired on his day off, in this one he’s the boss, and he tells people to knock it off and shit. He stands across the street drinking juice and watching his employees with a smile. I think he does a pretty good job, I would let him manage my barbershop. Except, this is his barbershop, so he probaly wouldn’t be interested. I guess I would just give him my barbershop then. (I don’t have a barbershop though, sorry.)

Also I gotta mention Cedric the Entertainer from ORIGINAL KINGS OF COMEDY. He plays an older character who is the heart-of-the-barbershop, give-Ice-Cube-wise-advice type of dude but at the same time is completely full of horseshit and everybody laughs at the ridiculous things he says. So he’s basically the Ice Cube’s dad in FRIDAY character except he never shits or falls in shit or has to shit real bad, which makes him a little more dignified, in my opinion.

And that’s pretty much the end of my review, people, but I would like to mention one thing about the cultural differences between white people and black people in the united states of america. This is not one of those standup comedy routines though, this is a legitimate point in my opinion. You see, most white people try to be quiet during movies. So when one of them talks, they are a big asshole. However when you see a movie with a predominantly black audience, it is usually a different deal. There is alot more interaction and liveliness. Sometimes it makes it hard to hear some of Cedric’s lines, but then that’s what renting the dvd is for. I have to say that watching this movie today I felt embarassed for all white people. Because we just don’t know how to enjoy a movie properly. There was more screaming and laughing in that audience than I have ever done in my life. And I claim to like the motion pictures.

I mean when white people talk about the communal movie going experience, they usually just mean that they all go “whoo!” when Yoda first whips out his light saber. But this really was a community, where you can feel what goes over well with the ladies, with the fellas, with everybody, with a couple people in the back, etc. The part where the African barber went apeshit on Eve’s asshole boyfriend was universally popular. But there were more controversial parts. When some characters spoke out against reparations for slavery there was a cautious smattering of applause, but they were definitely in the minority.

Shame shame shame on us whites. Not for not wanting to talk about reparations, which is also bad, but for being a bunch of pussies when it comes to the art of watching movies with a group. To be fair, it was at NEXT FRIDAY that I first heard a dude answer his cell phone during a movie and actually have a conversation. “Hello? Oh, I’m at the movies. What? Next Friday. Yeah, pretty good so far. About half an hour. Well, he moved to the surburbs. What? Yeah, it’s funny. Right now Debo is in the back of the dog catcher truck…”

I was against that.

But it was at THE BARBERSHOP that I first heard a woman ask, “Could you take that outside?” in such a way that the guy had no choice, she sounded like she wouldn’t accept no for an answer. I would like to hire her to go to every movie I go to, in case somebody answers their cell phone. Good job, lady.

Anyway, I thought this one was pretty good.

Anthony Anderson Cedric the Entertainer Ice Cube Tim Story
This entry was posted on Saturday, September 14th, 2002 at 1:58 pm and is filed under Comedy/Laffs, Drama, Reviews. You can follow any responses to this entry through the RSS 2.0 feed. You can skip to the end and leave a response. Pinging is currently not allowed.