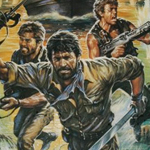 First we meet Carlos (Raul Julia, THE ROOKIE), a Cuban revolutionary just released from a 20 year stint as a political prisoner, and seemingly up to something. There’s a great scene where he stands in front of an old friend who doesn’t recognize him until he takes off his sunglasses, and I totally bought it because I didn’t recognize him. Could be any suave Latin dude until you see those eyes. Then it’s unmistakable. 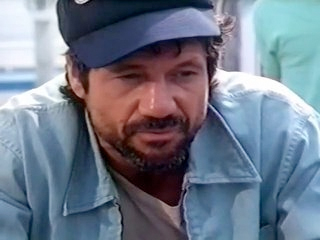 Next we meet Lucky (Fred Ward, MIAMI BLUES), and he’s a total Fred Ward character. Beard, jeans, baseball cap, lives on a small charter boat called The White Witch that his ego causes him to risk in a poker bet against some asshole kid he never saw before. Mac (Daniel Jenkins, O.C. AND STIGGS) is a convincing enough arrogant douche that I was surprised he wasn’t a one-scene villain but in fact the third protagonist who becomes co-owner of the boat and forces Lucky to take Carlos’s money for a charter that turns into a treasure hunt. He’s a skinny twerp with Willy Aames hair who claims to be a black belt in karate, enunciating it weird like he’s only read it, never heard it said out loud. But as a young brat looking to find himself he ends up going through the shit with Lucky enough to break through the gruff cynicism, bonding with him and becoming a son or nephew or little brother type figure.

There are many tense situations that come up. They get caught stealing fuel from a Cuban army dock and have to start shooting. Later they get stopped while there are dead soldiers on their boat. They have to answer questions from Cuban police and they get on the bad side of some rebels including a crazy killer called El Gato Negro (Antonio Fargas CLEOPATRA JONES, FIRESTARTER, BEYOND SKYLINE). 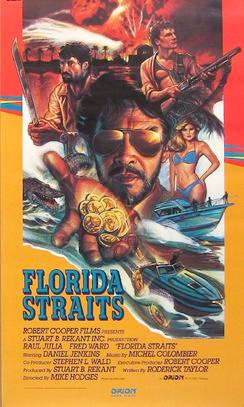 But it’s the little moments that make the movie, like when the guys watch from afar as Carlos carefully cleans himself up with river water and changes into a white suit to try to make a good impression on his long lost lady Carmen (Ilka Tanya Payan, SCARFACE). Or the laugh they share after defeating an adversary in a pretty clever way.

It’s an interesting theme that this Cuban revolutionary is taking two Americans on a quest for gold. What does this say about capitalism? I don’t know, but ultimately it seems like the gold is only the incentive for somebody to give him a ride. Once he has an answer from Carmen he only continues the quest as a manner of honor. When they get there he just laughs watching them freak out over the gold, and tells them they can have his share.

For Mac it’s really not about the money either. I mean, it is, but when he thinks they lost it all he doesn’t seem too upset. He came down here to find himself after college graduation, and going on that adventure must’ve done the trick. He doesn’t necessarily know what to do with himself career-wise, but once you’ve snuck into a foreign country and evaded trained killers the American job market probly seems less intimidating. Plus he learned about boats.

That would’ve been enough of a happy ending for me, but they have another twist that kinda symbolizes “Don’t worry guys, capitalism is still amazing” and also gives them an excuse for that bikini lady on the cover. Not my favorite part, but I forgive it.

This is a very enjoyable movie, and that’s about 50% on the cast. It was Ward’s follow-up to REMO WILLIAMS and therefore pretty much him at his peak. He’s usually a supporting player, though, and I don’t know if I can convey just how much I appreciate seeing him in the lead of a good movie like this. And Julia of course was a beloved and acclaimed actor and had co-starred in the best picture nominated KISS OF THE SPIDER WOMAN the year before, but this is a particularly good showcase of his charisma and gravitas. These two Americans fancy themselves as cool, capable guys, but they have a certain amount of awe toward this guy who has been through troubles and dealt with forces they could never really comprehend.

The screenplay is by Roderick Taylor, a poet turned rock singer turned screenwriter who happens to be the father of Bruce A. Taylor, the writer of ELVES! Father and son worked together on Super Force, Witchblade and THE BRAVE ONE, among other things.

Antonio Fargas Cuba Daniel Jenkins Fred Ward Ilka Tanya Payan Mike Hodges Raul Julia Roderick Taylor Victor Argo Zero External Reviews on IMDb
This entry was posted on Thursday, January 11th, 2018 at 11:08 am and is filed under Action, Reviews. You can follow any responses to this entry through the RSS 2.0 feed. You can skip to the end and leave a response. Pinging is currently not allowed.