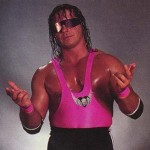 Well little did ol’ Vern know that there already WAS a picture focussing on one wrestler, a Canadian by the name of Bret “The Hitman” Hart, who was WWF tag team champion in the ’80s and world champion for quite a while in the ’90s. Bret doesn’t have the tragic dimension of a Jake “The Snake” or an aging Terry Funk, but what he does have is a great story and I would say that this picture is arguably even better than Beyond the Mat, which is saying alot.

I don’t know if there is an award like this but I think whoever made this picture should get a Lucky Motherfucker Award – Documentary, based on the fact that they set out just to do a story about Bret Hart and by accident happened to be filming him during a time which, as one film critic said, “is like a god damned SHakespeare type tragedy.” As a Film Writer I would have to agree with that. This is the story of a man born into wrestling – his dad is a wrestler, all of his brothers are wrestlers, all of his sisters are married to wrestlers. But Bret was destined to be the brightest star of them all, becoming for many years the most popular wrestler in the world and, according to the documentary, declared the most famous Canadian in the world. Which I guess isn’t saying much but still, give the canadians a chance I guess.

Bret was a dude who loved heroics, and although I remember him being a bad guy in the ’80s, he was known as a straight laced Good Guy when he was champ, and that is one of the themes of the picture – good guys and bad guys. Bret loved being a good guy who beat bad guys, and was distressed when wrestling started to change in the ’90s, and guys like “Stone Cold” Steve Austin – who cheated and sprayed beer around and flipped off the crowd, like bad guys – became crowd favorites. The WWF organizational type folks asked Bret to become a bad guy, and he didn’t want to. So what they worked out was an interesting thing where Bret would be a bad guy by telling the audience what he really believed – that americans are a bunch of jackasses for glorifying characters like Stone Cold.

This is another great theme of the picture, that wrestling is actually more real than you might think. What seems like Bret’s anti-American shtick is actually him speaking honestly to his fans. One of the funniest scenes cuts back and forth between Bret being booed and hissed as a villain in the US while he speaks his mind, and being applauded as a hero in Canada for saying the same thing.

Like in Beyond the Mat, we get to know the family and see the way wrestling is passed on through generations. There are some pretty creepy type scenes where the Hart boys all laugh about hearing screams of pain coming from “the dungeon,” the basement where their dad practiced real submission holds on rookie wrestlers. Then there is a scene where their dad, an old hunched over man who speaks and walks slow, goes into the dungeon with a couple of huge, musclebound young dudes to demonstrate some of those holds. It is amazing to behold this little old dude forcing the oafs to scream in pain. “STOP SIR, STOP SIR, IT HUUUURRRTTTSS!” This dude has absolutely ZERO of the badass presence of The Limey, but judging from this footage I’d have to say he’d give The Limey a run for his money in the even-older-than-Vern badass category.

Another parallel to Beyond the Mat is a brief segment with an interview with Mick Foley. Also, there is more from the weasely WWF owner Vince McMahon, who in this picture is playing the Darth Vader character. Where Hitman extinguishes itself is by building a suspenseful storyline as Hitman is offered $3 million to leave Vince McMahon’s WWF and join Ted Turner’s at-the-time more popular WCW for 2 years. Hitman decides to turn down the deal out of loyalty to McMahon, who he sees as a father figure, and he signs a lower paying deal to stay with WWF for 20 years.

But as the story unfolds we realize ironically that just the fact that Hitman considered leaving the WWF put him on McMahon’s hitlist. (You see it is ironic because his name is hitman, but it is a hitlist, metaphorically anyway. If you get my drift, kind of hard to explain there. never mind.) After signing the deal McMahon then turns around and says that he can’t afford it and has to let Bret go. Bret is then forced to plan his exit from the WWF, and we get to see the behind the scenes dealings and major betrayal that takes place. Because after 20 years with the WWF, and as a true Wrestling Artist, Hitman would like to go out in a blaze of glory, but Darth McMahon wants to do whatever he can to degrade Bret, making him a less valuable commodity for Ted Turner. You see, even in the wrestling world all the power hungry rich fuckers ruin it for everybody.

Anyway I don’t want to give it all away, but you motherfuckers know me. You know that I mean business. I do not take this type of shit lightly, I would not recommend a god damned documentary if it wasn’t worth your time. This is a truly great picture, and even if you don’t like wrestling at all, even if you don’t like Roddy Piper pictures like I do, by the end you will be very wrapped up in the characters, on the edge of your seat waiting to find out what happens. I like the way there are things that seem like just part of the act, that we are able to see are actually real. And sometimes the wrestlers handle their problems like wrestlers. In any other context it might be Negative to punch out your boss, but here they are just following the code of the Wrestler and you realize it’s the only thing that really could be done.

Anyway it will be a tight race for best picture, wrestling documentary this year. The only Negativity I have to say about this one is, what the hell kind of name is wrestling with shadows? I have no idea what it has to do with themes, motifs and what nots of this piece. It doesn’t really fit the story at all. Oh well, maybe it’s a canadian thing.

Stone Cold Steve Austin wrestling wrestling docs
This entry was posted on Monday, May 1st, 2000 at 5:11 pm and is filed under Documentary, Reviews, Sport. You can follow any responses to this entry through the RSS 2.0 feed. You can leave a response, or trackback from your own site.