UPDATE: King Newbs kindly transcribed this for me. Scroll to the end if you need a readable version. 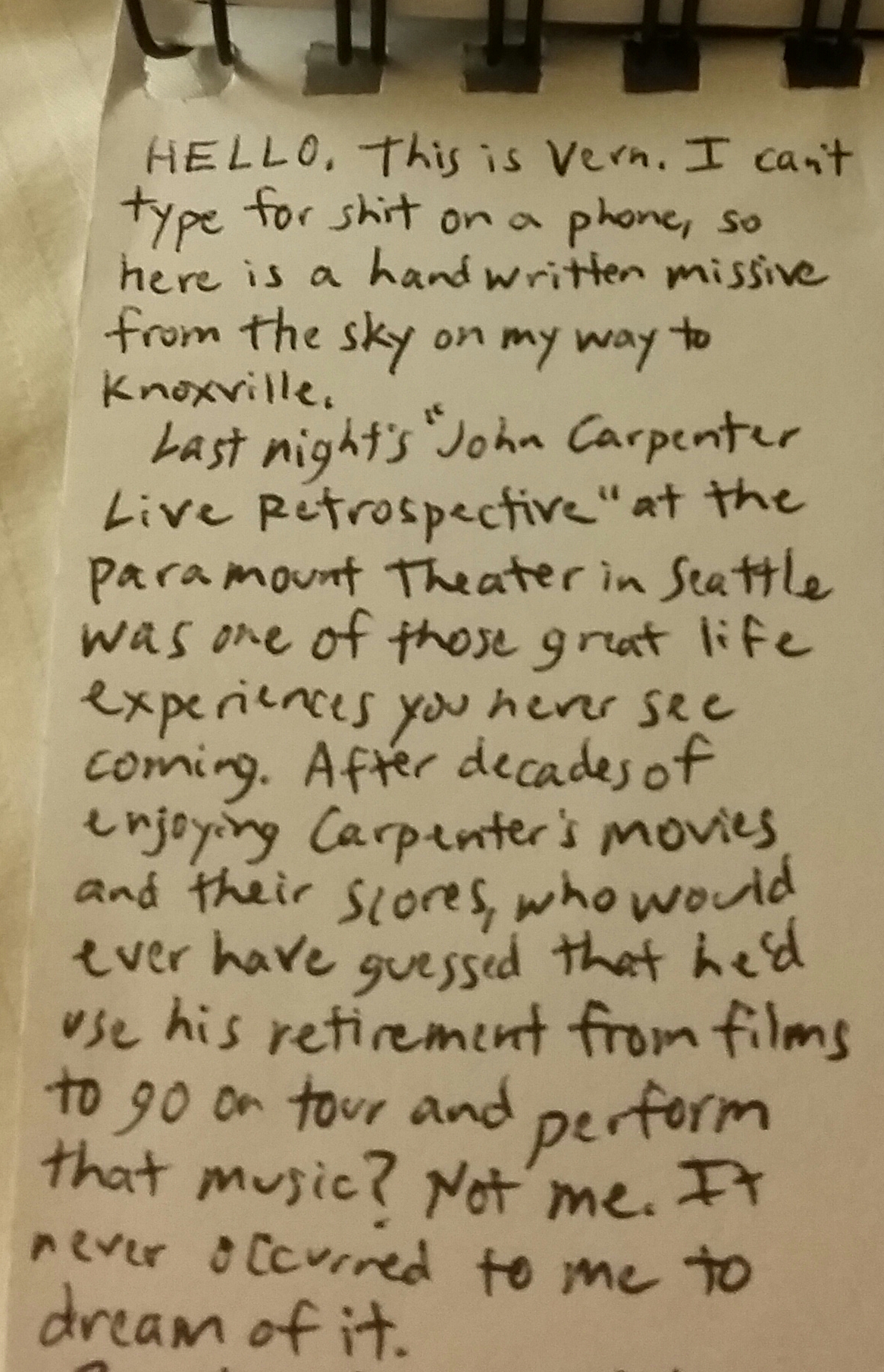 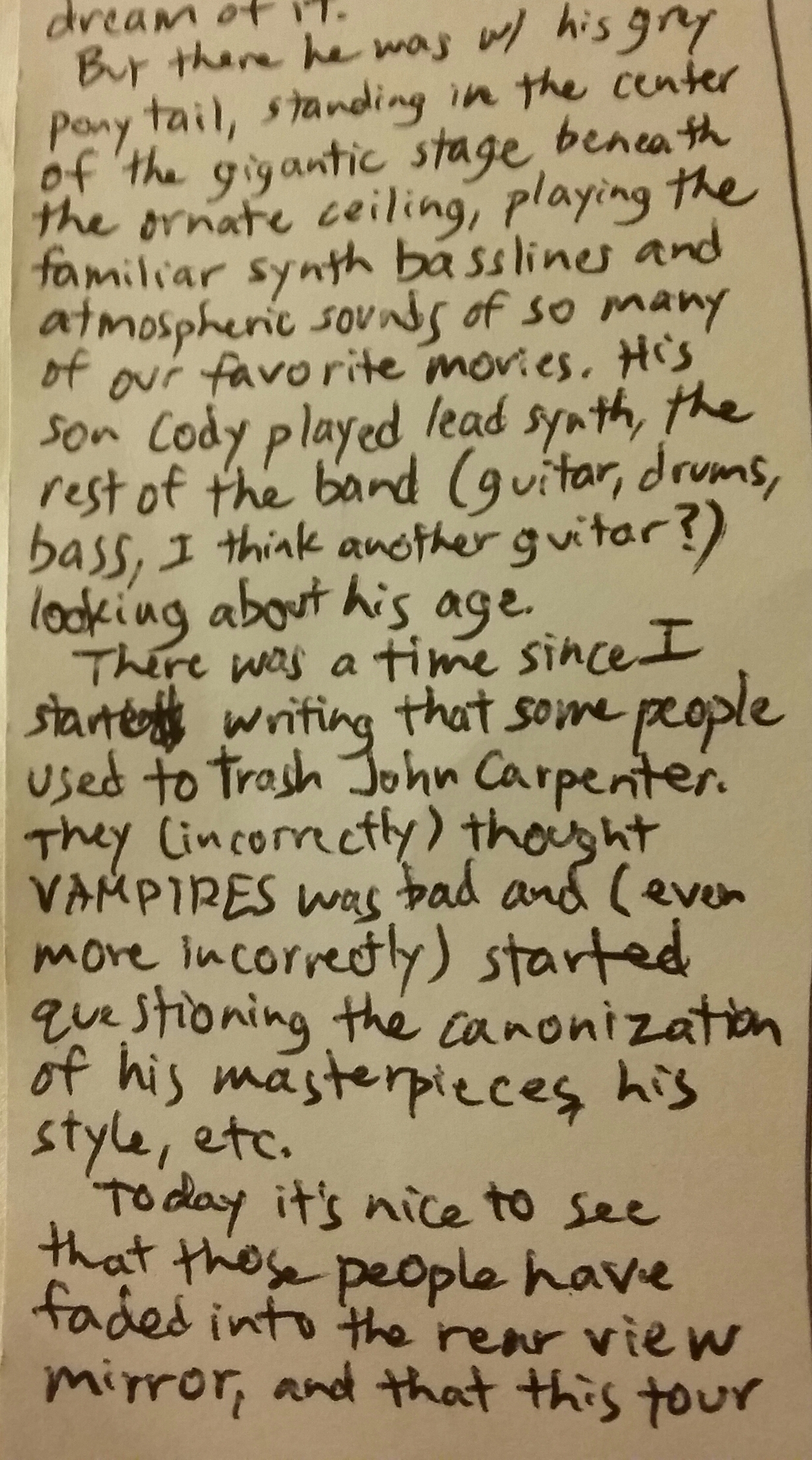 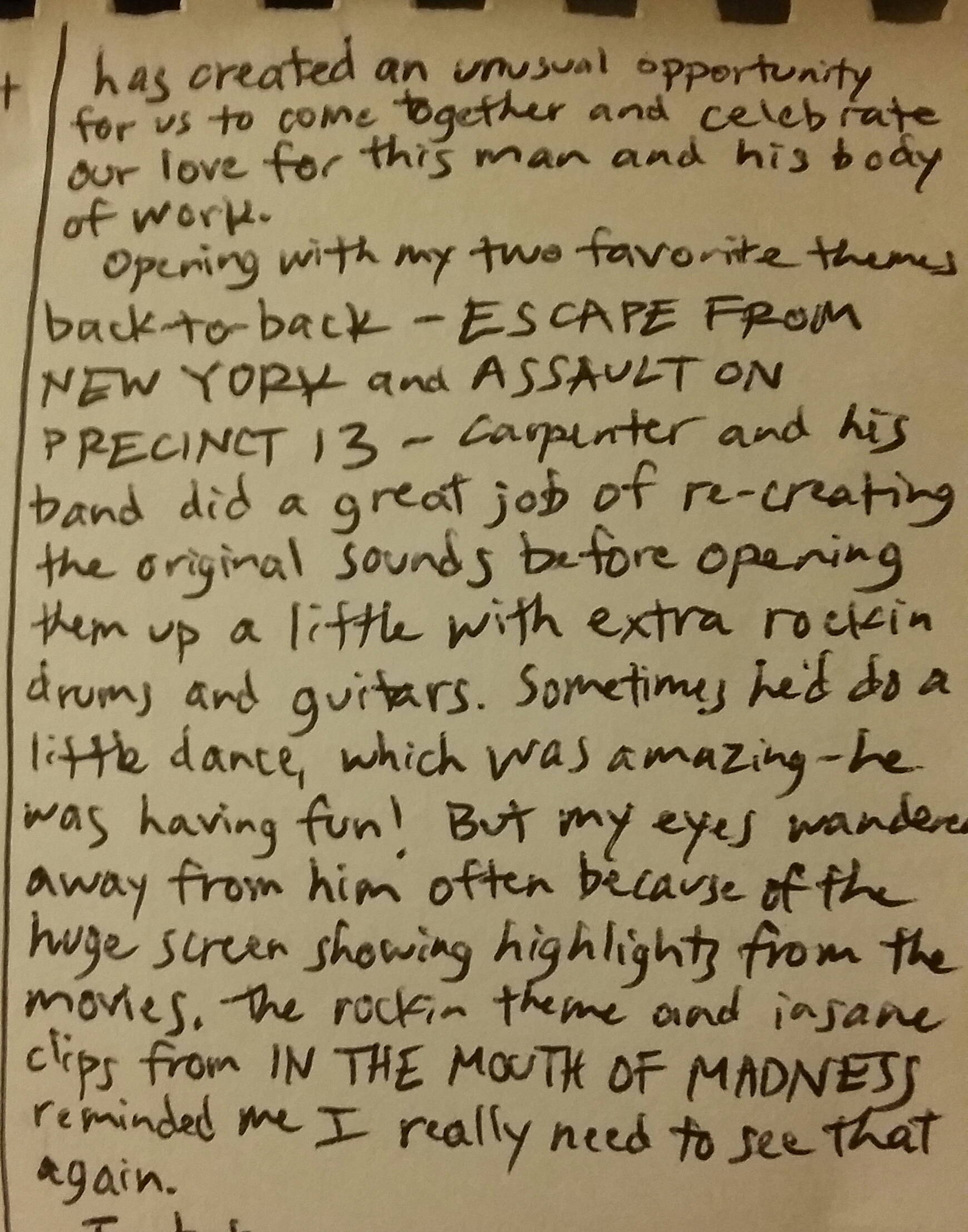 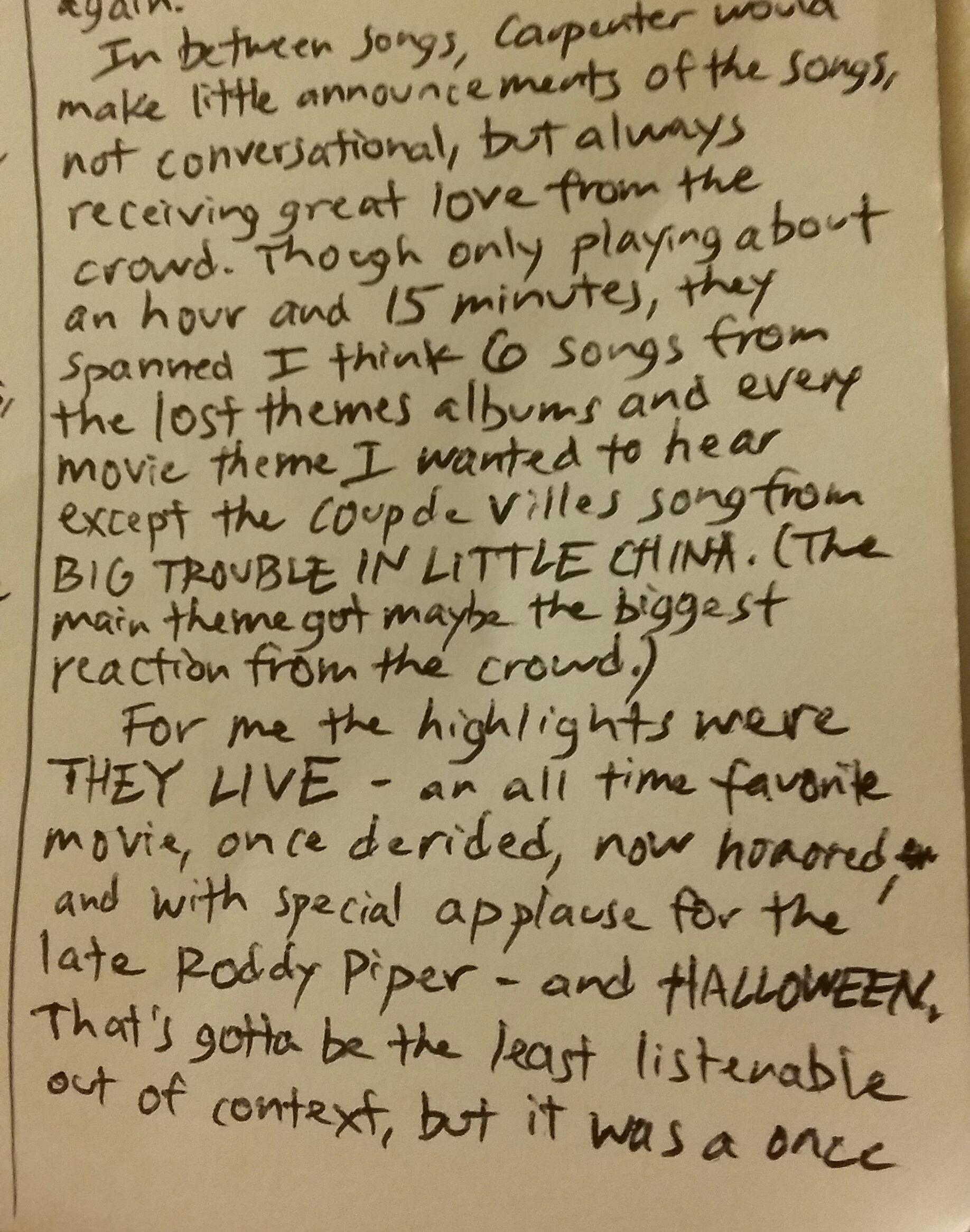 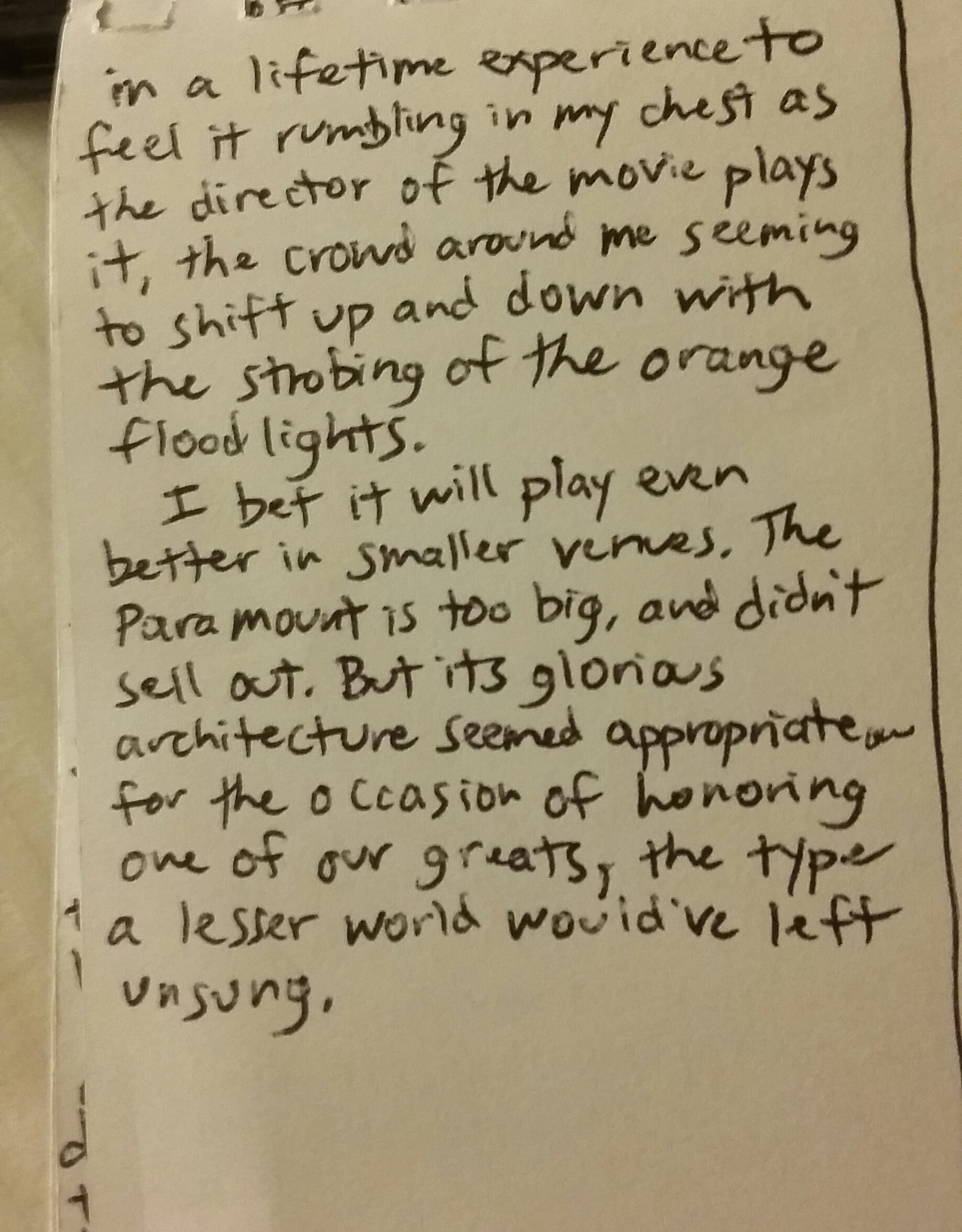 HELLO. This is Vern. I can’t type for shit on a phone, so here is a hand-written missive from the sky on my way to Knoxville.

Last night’s “John Carpenter Live Retrospective” at Paramount Theater in Seattle was one of those great life experiences you never see coming. After decades of enjoying Carpenter’s movies and their scores, who would ever have guessed that he’d use his retirement from films to go on tour and perform that music? Not me. It never occurred to me to dream of it.

But there he was with his grey ponytail, standing in the center of the gigantic stage beneath the ornate ceiling, playing the familiar synth bass lines and atmospheric sounds of so many of our favorite movies. His son Cody played lead synth, the rest of the band (guitar, drums, bass, I think another guitar?) looking about his age.

There was a time since I started writing that some people used to trash John Carpenter. They (incorrectly) thought VAMPIRES was bad and (even more incorrectly) started questioning the canonization of his masterpieces, his style, etc.

Today it’s nice to see that those people have faded into the rear view mirror, and that this tour has created an unusual opportunity for us to come together and celebrate our love for this man and his body of work.

Opening with my two favorite themes back-to-back — ESCAPE FROM NEW YORK and ASSAULT ON PRECINCT 13 — Carpenter and his band did a great job of re-creating the original sounds before opening them up a little with extra rockin drums and guitars. Sometimes he’d do a little dance, which was amazing — he was having fun! But my eyes wandered away from him often because of the huge screen showing highlights from the movies. The rockin theme and insane clips from IN THE MOUTH OF MADNESS reminded me I really need to see that again.

In between songs, Carpenter would make little announcements of the songs, not conversational, but always receiving great love from the crowd. Though only playing about an hour and 15 minutes, they spanned I think 6 songs from the lost themes albums and every movie theme I wanted to hear except the Coup de Villes song from BIG TROUBLE IN LITTLE CHINA. (The main theme got maybe the biggest reaction from the crowd.)

For me the highlights were THEY LIVE — an all time favorite movie, once derided, now honored, and with special applause for the late Roddy Piper — and HALLOWEEN. That’s gotta be the least listenable out of context, but it was a once in a lifetime experience to feel it rumbling in my chest as the director of the movie plays it, the crowd around me seeming to shift up and down with the strobing of the orange floodlights.

I bet it will play even better in smaller venues. The Paramount is too big, and didn’t sell out. But its glorious architecture seemed appropriate for the occasion of honoring one of our greats, the type a lesser world would’ve left unsung.

John Carpenter
This entry was posted on Wednesday, June 15th, 2016 at 10:37 pm and is filed under Blog Post (short for weblog). You can follow any responses to this entry through the RSS 2.0 feed. You can skip to the end and leave a response. Pinging is currently not allowed.