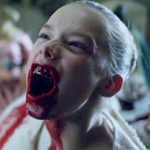 This is the story of Lucie (Chloe Coulloud) on her first day as a trainee helping Mrs. Wilson (Catherine Jacob) on her rounds taking care of elderly people, checking up on them, giving them their meds and stuff. Lucie, who kinda reminds me of Scarlett Johansson when she was a little younger, impresses Mrs. Wilson by taking to it well, even knowing how to administer shots.

One of the houses they visit is this big dino-damaged mansion that’s legendary and mysterious among the locals, so she’s excited to see it on the inside. It kinda seems inspired by GREY GARDENS, because it’s this elaborate building allowed to fall into disrepair by its eccentric, elderly owner. But in this one she’s a famous ballet dancer named Mrs. Jessel (Marie-Claude Pietragalla, a real dancer), now a vegetable, but set to live out her goldenish years on the property.

This story does take place on Halloween (a nice companion piece to INSIDE’s Christmas setting), but I don’t think that’s an Immortan Joe costume, that’s just how she looks.

I guess because it’s France there’s very little Halloween imagery, but there is one weird scene where the protagonists are in a car and come across three trick-or-treaters in HALLOWEEN III masks:

And in case you can’t believe your eyes one of the older people starts singing the Silver Shamrock song. Who would’ve thought that some day there would be loving homages to HALLOWEEN III: THE ONE WITHOUT MICHAEL MYERS?

Here’s the hook: there’s supposedly treasure in the house somewhere. So when Lucie’s shitbag ex-car thief boyfriend (Felix Moati) hears about the old lady he bullies Lucie and his younger brother Ben (Jeremy Kapone) into breaking in at night. He doesn’t want to be a fisherman for life and she has money problems too and she gives in to the fucker. Next thing you know they’re sneaking around with flashlights and taking the key off the old lady’s necklace and hearing weird noises and finding themselves lost in other planes of reality and getting munched on by monster ballerinas. 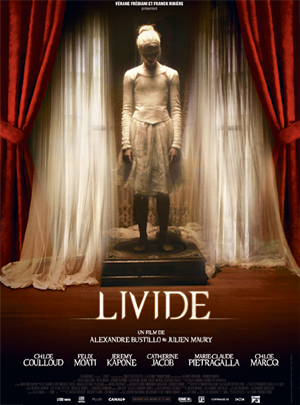 When they’re searching the house one of them throws aside scissors, and it seems like an INSIDE in-joke. But it turns out to be set-up for a later stabbing. Good trick.

It takes a while to get to the more interesting parts. But the mansion does have some strange stuff in it, most notably taxidermied creatures with animatronic movements. Lucie ends up sitting with a tea party of dead animal heads on doll bodies that jerkily move every once in a while. You don’t see that every day.

I’m gonna give away some of the mystery now, so beware. At the middle mark we start seeing flashbacks to when Mrs. Jessel was younger, giving private ballet lessons to little girls, and one of her students is leaving and runs into a mischievous pre-teen dancer who bites her. It seems the teacher and her daughter Anna (Chloe Marcq) are some type of vampires. Maybe things aren’t what they seem around here, and maybe they shouldn’t be messed with.

There’s definitely a Guillermo del Toro vibe to some of this: old timey objects, clockwork, magickal shit and dark fairy tales. In the weirdest moment WEIRDNESS SPOILER two characters have their necks slit open, weird pupae inserted into the wounds and then moths fly out of their mouths and into each other’s mouths, and this seems to be some kind of soul transference process, causing a body switch. The guys who wrote that Jason Bateman/Ryan Reynolds comedy CHANGE UP, whose creative labors brought them to “they accidentally wish for each other’s lives while peeing in a fountain together” will see this and think “god damn it, why didn’t we think of the moth thing?”

It turns sweet and beautifully tragic at the end, and that is not what I expected from the INSIDErs. I don’t like it nearly as much as INSIDE, but I like that it’s something totally different.

The aftermath is revealed under the opening credits, though it’s easy to forget about by the end. Or at least I did. But when I went back to make some screen grabs I remembered the rotting body on the beach. And a moth flies out of her mouth.

Alexandre Bustillo ballet Chloe Coulloud French horror Julien Maury vampires
This entry was posted on Wednesday, January 27th, 2016 at 11:51 am and is filed under Horror, Reviews. You can follow any responses to this entry through the RSS 2.0 feed. You can skip to the end and leave a response. Pinging is currently not allowed.