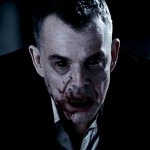 Although this has some of the weaknesses that are common in modern horror, it’s by no means your average horror movie that you would expect to come out these days. The tone is much more serious. The soundtrack is quieter. It is more about atmosphere and dread than they usually bother with anymore.

And it has that great premise. I think this is a good movie, and horror fans should see it. But it’s a little frustrating to me because it has some greatness in it. But only some. Little drips of greatness here and there mixed in with some goodness and some mediocreness, stirred together into a quality swirl.

To me the opening, especially the second scene where they introduce the hero, is the best part of the movie. Josh Hartnett, the sherriff of this small town of Barrow, Alaska (population 152 after people leave for the month of darkness – much less by the end of the movie [SPOILER]) stands on a snowy hill with one of his deputies, staring at a pile of melted cell phones, discussing why somebody would do something like this. Since we in the audience have god like powers and know that this is a vampire movie, we have a good idea of why somebody would do something like this. But these cops don’t, or if they have any sense of it they don’t want to say it out loud. The way Hartnett talks quiet and grimaces and is shot in close-up looks just like another perfect opening to a modern vampire movie, the Michael Parks monologue in FROM DUSK TILL DAWN. But instead of leading into a balls out action scene this leads to the two buddies reminiscing as they watch the last sunrise before the 30 days.

I love the slowly building dread as reports start coming in of strange acts of vandalism around the town. Sled dogs killed, a helicopter destroyed. At first it’s like a horror DIE HARD, the villainous plan unfolding piece by piece. And Hartnett – who seems like he would be bad at playing a sherriff, but actually I think he’s the best part of the movie – takes charge, while seeming to realize that something fucked up is going down. He’s not John McClane, he’s a stoic type. He internalizes it, he doesn’t start yelling or swearing like alot of characters would do to show that this is a dramatic situation.

The vampires show up before too long. It’s a small group of them, and they’re some of the better vampires of modern horror. They’re probaly most like the ones from John Carpenter’s VAMPIRES, because they’re these animalistic monsters, they are strong and fast, vicious and cruel. But they aren’t goth or Euro. The leader (who I guess has a name, but they don’t say it in the movie) is a grey-haired dude who I bet usually plays businessmen, but he is great as a monster. You don’t find out much about their history or motives, what you do know is from them talking in subtitled vampirese.

After the initial slaughter the story should start getting even better, because now is when that 30 days of night becomes important – the sherriff and the other survivors have to figure out how to wait it out, stay alive until the sun comes back. But I think this is where the movie should be better. Man, that’s the bitch of telling a story sometimes. You got this great beginning and ending but then you think, fuck, I forgot to have a middle.

Well, I’m not saying they don’t have a middle, but I wish I could see a longer cut of this movie with a way more detailed middle. Because the details are what’s missing. The survivors spend most of the month huddled in an attic. We know time passes because facial hair grows, skin gets dirty, and every once in a while it says on the screen what day it is. But you just keep seeing them in those same coats and hats, it doesn’t really seem like they’ve been there that long, and we don’t know exactly how they’ve been spending their days. In a story like this I want to see the methods of the operation, the things you wouldn’t necessarily think of. We know they sleep in shifts (no shit). We don’t know how they find and prepare food, how they go to the bathroom, how they even keep track of what day it is. We have the dramatic moments where there’s a sound outside or somebody gets too stressed and tries to run, but we don’t have the long stretches leading up to those moments. Sometimes things seem to happen too fast, like when Hartnett goes into another room where everyone knows he has to kill a friend, and there is not enough time to dread the clunk of a guy being beheaded. It happens moments after the door closes. Like somebody told them to just get the scene over with and not worry about making it dramatic.

We also don’t have any good shooting-the-shit-to-pass-the-time-and-while-we’re-at-it-it’s-cool-that-we’re-bonding type of scenes. Think about JAWS, the best scene in the movie is the three guys sitting on the boat having a long, drunken conversation and sing-a-long. It seems like there’s some piece of bonding missing between Hartnett and Mark Boone, Jr., who is the best supporting character and who does a better job of vampire hunting than he did in VAMPIRES. And most of the other characters, to be honest, I couldn’t remember who was who. They kind of set up the people of the town at the beginning but I couldn’t keep track of all of them. I would like to think they shot more character moments and some asshole cut them out. More scenes like that opening with the cell phones, where Hartnett is able to have a small laugh in the middle of the dread.

Also, it seems like the vampires aren’t doing much at this point. I like that they are not the focus of the movie. I’m not saying to give them a speech explaining what they’re up to. But the way the story is told it seems like they kill everybody on day 1 or 2 and then wander around with nothing to do for 29 days. I’m sure it’s cool that they don’t have to worry about the sun, but it still makes their whole scheme seem kind of lame. They should be living it up, man. This should be the biggest vampire party ever. If I was one of them I would get bored and leave.

But the real problem is with the action, when it happens. At this time I have a personal message for Danny Boyle. Danny, you’ve done some good movies, I enjoy your work, but FUCK YOU for unleashing this shakycam bullshit on the horror genre. It’s bad enough they had to ruin action movies, why’d you have to do it to horror? All of the attack scenes in this movie are blurry and chaotic. At first it makes sense because it makes you confused like the characters are. But eventually it starts to piss you off. When one character shows up for a big hero action scene the audience should be thinking wow, this is awesome instead of wow, this must be awesome.

ATTENTION DIRECTORS: You’re making a god damn movie! Not a radio play. We’re supposed to be able to watch things happen! You’re blowing it! Go back to camera school. Those cameras used to be used to tell stories by creating images. The whole implying-chaos-by-making-some-blurs-and-whooshes thing is only to be used every once in a while, not every time something cool happens. And what’s the deal with skipping frames every time a vampire attacks? I know that’s supposed to tell us to be excited. But isn’t that like admitting that the scene on its own isn’t exciting? There’s one scene where some mayhem happens and then as soon as it’s over and everything is okay the camera goes back to normal. And I thought wait a minute, why is this the part you want us to be able to see? Wouldn’t it be better if we could see that other part?

Well, I’ve done alot of criticizing here, but I am doing it in the spirit of an asshole dad who pushes his son too hard at basketball, like Denzel in HE GOT GAME. I’m doing it because I see the potential here, this movie could be Michael Jordan but sometimes it gets lazy and acts like a Washington General.

In addition to VAMPIRES and FROM DUSK TILL DAWN, there is alot that reminds me of Carpenter’s THE THING (obviously) and you’ve got some DAWN OF THE DEAD there with the holing up. Some of the really great scenes are slightly diminished by being similar to great scenes in other movies. The coolest shot in the movie is not unlike the coolest shot in the DAWN OF THE DEAD remake, and the most beautiful and tragic scene in the movie is just like a scene in BLADE II. When it was in BLADE II I thought only Guillermo del Toro would do that, but I guess this guy would too, after he saw BLADE II.

But when it’s reminding you of other movies, it’s mostly great movies, and as a whole it has a pretty original feel. The style goes a long way toward making up for the other things I complained about. I do think we’re losing something with all the digital color tweaking they do now. They get carried away with how cool they can make something look and it gets further away from reality. And there is one quick scene in a blizzard that looks almost SIN CITY phony and really took me out of the movie. But that’s the exception to the rule. The dark grey sky, the strange glow of the snow on the ground, the vampires lurching around in the shadows on the rooftops… the cold look matches the grim mood. It’s a creepy movie. You don’t see that too often anymore.

The score is good, kind of Carpenter meets Tobe Hooper. Its more drones and clangs than musical themes. And it’s not one of those scores that always has to call attention to itself, like Pras and Wyclef saying “one two, one two” in the background to prove they’re still in the group when Lauryn Hill is singing. It will sit it out for long stretches.

I wish this movie was more consistent, but I still gotta give it my seal of approval. It’s not all the way to being a great movie, but at least it tried. Its bloody, torn-out heart is in the right place. And maybe it will work better on a second viewing.

vampires
This entry was posted on Friday, October 19th, 2007 at 4:37 am and is filed under Horror, Reviews. You can follow any responses to this entry through the RSS 2.0 feed. You can skip to the end and leave a response. Pinging is currently not allowed.

One Response to “30 Days of Night”