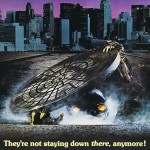 This is one of those rare part 2s where if you haven’t seen the first one, you will have no clue what in fuck’s name is going on. Also, if you have seen the first one, even if you have seen it recently, and if you are me, you also will have no clue what in fuck’s name is going on. The movie starts with a long flashback to 1602 or something, where you find out all this new information about how there were two twin brothers who were the first vampire and first werewolf and the werewolves were attacking villages so the vampires were trying to kill the first werewolf and then they caught him and his brother didn’t want to kill him on account of them being brothers but the vampires were assholes and got mad so they locked the werewolf brother away forever. 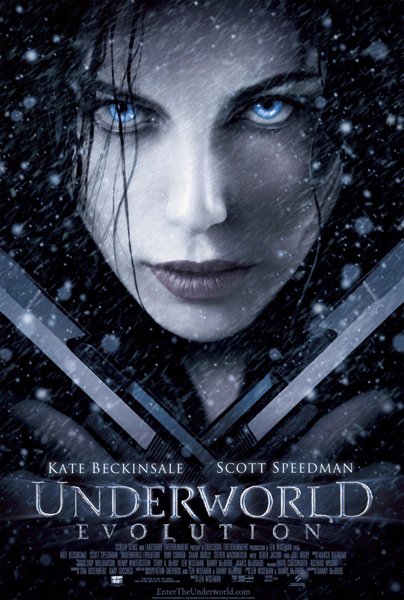 Then it goes into a montage of clips from part 1 and Kate Beckinsale’s character Selene has some narration explaining to you everything that happened in that one. At the time, when I watched it, I felt like I understood what happened, but now that I have seen this montage I’m pretty sure I got no clue what this is all about. Something about vampires, werewolves, a guy named Viktor, an ancient war, some fire maybe, possibly magical crystals or dragons, the hybrid species of vampire and werewolf, maybe swords, who knows.

So the movie hasn’t even started, I’m already lost, and then it seems like virtually the entire god damn running time of the movie is devoted to people standing around talking about yet more backstory. They spend so much time talking about the backstory that there’s not much time for actual story. “Ah, you THOUGHT this is what happened hundreds of years ago, but actually THIS is what happened hundreds of years ago. Here is an engraving of it. And wait until you hear about THIS thing that happened which is equally monumental. And THIS!”

In part one, I thought the movie was okay but I did keep thinking every once in a while that I wished Blade would just bust in through the wall and kill all these fucks. This movie makes it very clear why Blade is an easier vampire to hang out with. He doesn’t talk very much. All these assholes do is talk talk talk. Hundreds of years ago this, hundreds of years ago that. WHO FUCKING CARES WHAT HAPPENED HUNDREDS OF YEARS AGO? You people need to get over that shit and if you don’t, AT LEAST stop talking about it in front of us because we came to be entertained, not to get a fictional history lesson.

Somehow I figure if they had spent the whole second Star Wars movie standing around describing what happened in the prequels, nobody would care about those movies anymore. You gotta have more story than backstory.

Here is the story they do have: Selene and the guy from Felicity (who now has the power to turn blue and punch people because he’s part vampire, part werewolf) are on the run from the other vampires because of what they did in part 1. But the ancient guy they awoke at the end of part 1 comes up, he is apparently one of the twin brothers, the first vampire, but now he is a monster with wings so I’m not clear how exactly this connects with the stupid bullshit prologue we already sat through. Right at the beginning he kills all the other vampires, so there is nobody chasing our heroes anymore.

But this vampire monster wants to find and revive his imprisoned werewolf brother, and the way to find this out is through Selene. Why? Because her dad made the prison. Oh, whoops, sorry, I just spoiled about 45 minutes of talking about backstory that explains why.

So there is about 2 or 3 medium length action scenes where the monster flies around and the blue guy punches him and they drive around in a truck. The effects are pretty bad but in a good way, it looks real phoney and occasionally herky jerky like in the old Sinbad movies. Then the action stops and they talk some more. For a long god damn time. Oh man, they will talk.

One other thing is going on, Derek Jacobi is apparently the dad of the twin brothers, so he is trying to find them for some reason, or something. He has an army of guys in helicopters and stuff. His main job though is to talk.

Then at the end they fight the monster and they kill him by throwing him into the helicopter blade. Who knew, all this time you thought it was stakes that killed vampires, all you had to do was throw them into a helicopter blade.

In this one they did at least bother to explain what happens to vampires in sunlight. What happens is they get burnt, and then they heal. At the end, Selene magically becomes a daywalker (spoiler), and you’re not sure why it’s that big of a deal since sunlight has never caused much of a problem for her in either of these movies. The only thing exciting about it is that the sun comes out and you finally get a reprieve from everything being tinted blue all the time.

I mean, there are times when you see colors other than blue. Every once in a while there’s sparks or an explosion or something and you think HOORAY! ORANGE!

There’s alot of things I didn’t understand, I’m sure the movie probaly explains some of them but I was too thick to pick up on it. Here’s some of my questions:

There was a couple little touches here or there that I liked. I liked when the first vampire was flying in front of Selene and she put a gun up to his mouth and just started shooting into it. Also I liked when he yanked on a cable dangling from a helicopter and pulled the entire thing down into the cave or wherever they were. And I liked that they mentioned that Selene had wasted her whole life killing hundreds of werewolves and should feel bad about it, although they didn’t do enough with that emotionally, they just kind of mentioned it.

My pal Harry Knowles gets alot of shit for his review of THE MATRIX RELOADED where he claimed that it would’ve been better if it had vampires and werewolves in it. All I can ask Harry is, are you happy now? Do you see what you’ve unleashed upon this earth? May God have mercy on your soul.

I want to talk directly to Len Wiseman here now. Buddy, you got an important responsibility here. Nobody gives a fuck what you do to the reputations of vampires, werewolves, or magic blue people. If you want to bore us to death with old British guys talking about what one vampire did to another vampire’s necklace 600 years ago, fine. This is America. We are tolerant of different lifestyles here. But when it comes to DIE HARD, you got higher standards to live up to.

YOU CAN NOT FUCK THIS UP. I don’t know if you’re up to it. All I know is these vampire movies, who knows what you do in real life. If you got a trick up your sleeve, it better be a good god damn trick. You better fucking KNOW this is gonna work. Because if you are not the man to do DIE HARD, and based on your track record that seems to be the case, then the moment to act is now. America is counting on YOU to make a new DIE HARD. If you can’t do it, you gotta step down now. Let somebody else do it, or let the movie die.

If you are a tenacious motherfucker, if you’re gonna insist on doing this, you better get some John McClane in your bones. Because you are facing overwhelming odds. Doing a good DIE HARD 4 would be hard even for a director who knew how to make action movies, because how do you do a part 4? You have never done an action movie before, you have only done movies where it’s blue and people do a flip or two between half hour conversations about back story. That’s not the same.

The world is Nakatomi Plaza. The script is an army of terrorists. Your apparent mediocrity is bare feet and lack of weapons. BUT YOU WILL OVERCOME, BECAUSE YOU ARE JOHN MCCLANE.

also, go light on the CGI dude, this better be DIE HARD, not final fantasy.

Len Wiseman vampires werewolves
This entry was posted on Saturday, July 15th, 2006 at 3:29 pm and is filed under Action, Fantasy/Swords, Horror, Reviews, Thriller. You can follow any responses to this entry through the RSS 2.0 feed. You can skip to the end and leave a response. Pinging is currently not allowed.