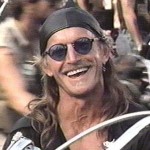 Edwards gets into town just in time to find out that his par†ner who got there before him is already dead and even got his heart cut out. So so far this investigation is not going well. They had followed a “designer drug” to its source which, according to the partner in his last payphone call, was a guy named Antoine something. Turns out the name belongs to a killer who Henriksen burned alive the same day he got bit by that gator and decided to leave the force. So Edwards is sent to him for tips and after the customary period of buddy rejection they team up to solve the case. Lance cuts his swamp dreadlocks and rejoins society with a leather jacket on his back and a cigarette dangling from his mouth. 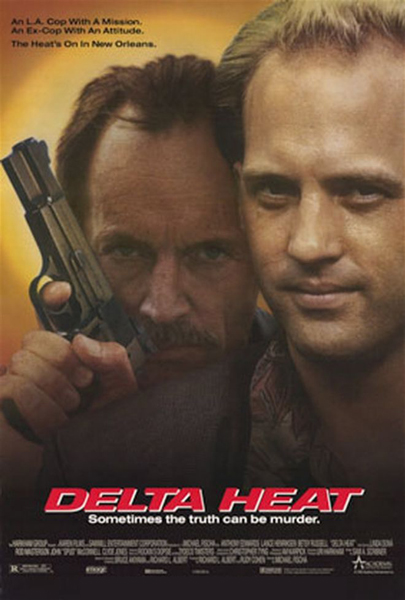 You know, come to think of it it’s kind of like MONEY TALKS, because one buddy is clearly more likable and enjoyable to watch than the other. Who is more interesting to you: Lance Henriksen with a Cajun accent and hook hand, or Anthony Edwards with a dangly earring? The introduction of Edwards’ dumbass character is perfect. Somebody’s carrying his luggage into the hotel for him and he snaps, “Careful with that – there’s a laptop in there!”

This is by no means a great movie, but if you’re like me and you rent it thinking “hey, this might be a watchable Lance Henriksen role” you will be satisfied. His name is “Jackson Rivers.” He gets to do a Cajun accent. He’s introduced with a baby raccoon climbing around on his back. Later he has a snake around his neck. In one scene he jumps up, hooks his hook hand into the ceiling and kicks a guy – but then gets stuck and when he reaches for the gun in his pants it slips and falls out his pantleg. That’s one I’ve never seen before. In the same scene Anthony Edwards rolls through a giant pile of shrimp. It’s like a special Cajun edition of Super Sloppy Double Dare.

Somebody is behind this drug trade, and whoever it is keeps cutting hearts out. Maybe it’s that burnt up killer, come back Freddy style. I wonder if the ELM STREET remake will be an action movie where he sells designer drugs? It could happen. One good part is when Edwards finds a human heart in his hotel bed. Take that, city boy. At this point Jackson Rivers isn’t talking to him so he goes to his gate and leaves the heart there in a plastic bag, like “Maybe this will refresh your memory.” And it does, that’s how he wins him over. I wonder if he ate it? I don’t know that much about swamp culture.

It’s not bad. As I often write, “there are a few twists here and there.” There are a couple odd touches, like a scene where Edwards has to pay some hillbilly to bring him to Jackson’s place on a boat, then when they get there it turns out there was a road there and he was just scamming the tourist. A couple odd touches like that made me wonder if it was loosely based on a novel or something, and the credits do say “based on characters created by” somebody, but I haven’t been able to find any explanation of what it means. (More likely they wrote the first draft where it was totally different – less like MONEY TALKS and more like X3: X-MEN REUNITED or RED DRAGON.)

Well, this is a short review. I could try to compare it to other movies with “Delta” in the title such as DELTA FORCE, DELTA FORCE ONE, DELTA FARCE, etc. Maybe try for some kind of Delta Burke reference. But why postpone the inevitable? the end

Lance Henriksen
This entry was posted on Sunday, July 20th, 2008 at 11:12 am and is filed under Action, Reviews. You can follow any responses to this entry through the RSS 2.0 feed. You can skip to the end and leave a response. Pinging is currently not allowed.