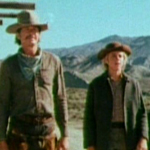 Of course they form a sweet friendship as Chino keeps getting a little nicer to him. He talks gruff but offers him things like letting him borrow a horse to ride into town and help him with different tasks. He makes him smile by threatening to cut his ears off. After a couple days he admits he likes having the boy around and hires him, even though he’s Chino, for fuck’s sake, why would he need anyone to help him with anything? Ridiculous. 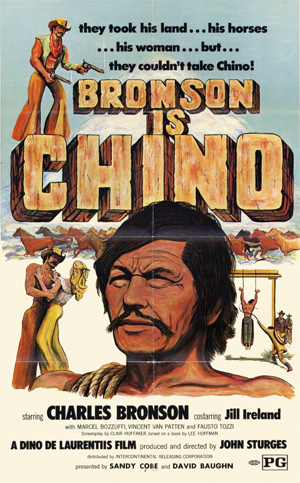 He’s kind of a rough character for a Van Patten kid to be hanging around with. In one scene they’re riding a trail and see a whole bunch of Indians watching them from the hills. Chino gives the horses to Jamie, tells him to get out of the way, starts bleating out some kind of war cry, tears off his outer layers of clothing and throws them on the ground, gets on his knees. They come down the hill and charge him. He’s challenging them! Their leader makes a run at him, leaps off his horse at him, they roll around on the ground and Chino gets the full mount and pulls a fist up… what the fuck is he gonna do, beat this guy up and then go through them all one at a time?

Nah, they’re just fuckin around. They start laughing. It’s his old friend Little Bear (Florencio Amarilla, also in RED SUN and CHATO’S LAND). Chino and Jamie stay with them for a while. Jamie meets a girl (Melissa Chimenti?) and everything. Not bad. On the other hand he gets kind of annoyed that these guys have never seen a yellow hair before and are constantly fondling his head for good luck.

We can see that Chino has a heart hidden deep, deep inside that leathery, nearly impenetrable outer shell, and some people do seem to sort of be friends with him, but also they’re clearly terrified of him. The first thing he does when he gets into town is watch a proper lady (Jill Ireland) get out of a wagon and then punch a guy in the face for warning him not to. The guy is way taller than him and has just as awesome of a mustache but Chino grabs him and tosses him right into the poor kid, knocking him on his ass.

When Chino goes into an empty saloon the bartender immediately panics, gives him a whole bottle for free and begs him to leave since he just repaired everything from last time. (It doesn’t work.)

The owner of the wagon is Maral (Marcel Bozzuffi from THE FRENCH CONNECTION), who also it turns out is the owner of the land Chino has been living on. Chino only finds this out when he goes to chew the fucker out for putting up barbed wire that fucked up one of his horses. Whoops. And as you can imagine Chino has eyes on that Catherine lady that’s at his house.

But don’t worry! It’s not that guy’s wife, it’s his sister. But do worry! Because he’s just as possessive as you would expect him to be of a wife. She’s heard that Chino raises the best horses and wants to buy one, so she starts visiting him. When he finds out she rides side saddle he refuses to let her do that on one of his horses, so she shows up with a dress she’s sewn into pants and he starts teaching her how to ride like a man. This almost seems like a swipe at prescribed gender roles, but there are some things we’ll get to a little later that sort of invalidate that. And not just the part where he slaps her on the ass.

Before we get to that, let’s discuss the scene where she walks in on him taking a bath. There’s a real sudden cut to Chino, wet and naked, seen from the waist up, his hands down below and groaning orgasmically like he’s jerking off just below the frame. Which he may or may not be, but he might just be scratching his back against a brush on the wall. He’s real embarrassed and drops into the tub when Catherine walks in. Earlier she compared him to a horse and now she says “You even look like a horse,” which in this situation he should obviously take as a compliment.

But that’s definitely not the weirdest sexual scene in the movie. That would have to be the part where Catherine is sitting on a grassy knoll watching the horses and all the sudden one of them mounts another one and starts going at it. She just sits there and watches. Then Chino shows up and realizes what’s going on and then they kinda sit there and watch the horses fuckin and exchange uncomfortable glances. Gettin ideas?

Well, maybe not because when he takes his coat off and she stands up and it’s obvious that they’re both thinkin the same thing she suddenly turns and tries to make a run for it, he chases her and grabs her, they slap at each other, he pins her down, holds her wrists down, it’s fucked up. But as often happens in some of the older westerns and Japanese films the attempted rape is all innocent foreplay and she decides instead of fighting for her life to be in love and kiss him. It looks like she’s willing and he’s cradling her head gently but if you look closely he’s holding her by a fistful of hair.

And as they get into it the camera pans up and there’s the horses there: 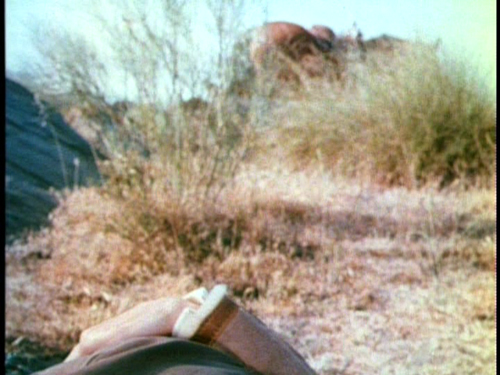 You can’t really tell for sure if they were really still fuckin in the same shot as Bronson and his wife kissing. I hope not because jesus you guys.

Anyway they fall in love and the brother forbids it but they meet in secret and Chino decides he wants to marry her. He tells the boy all about it, he’s gonna fix the place up to be more girl friendly, buy her a stove to bake with, and a laundry wringer. I’m sure he will still let her wear pants but he clearly doesn’t expect her to join in the family business.

This would be a happy ending of course, but who the fuck wants to see Charles Bronson settle down? Especially when he’s playing Chino, a man who has been repeatedly compared to wild mustangs, and has a way with them, can make them come to him just by whistling. He’s like a horse, but one that can’t be broken. So when things end up in a big shoot out, and he does not get married, and doesn’t even keep the kid around, and instead burns down his house and hits the road, that’s a pretty satisfying ending. I mean, I feel bad for the kid, but you also get a sense that this has been a man-ifying experience for him just like Chino’s days with the Cheyenne, and he’s got to strike off on his own and figure out what to make of himself. Maybe some day they’ll run into each other on a trail, charge each other, fake wrestle and have a laugh.

I found this on a pretty shitty, watermarked “Laser Light Special Edition” double feature DVD and was very surprised when it ended and suddenly there’s a be-gloved Tony Curtis gripping onto a bar for dear life and saying “I hope you enjoyed our Charles Bronson program”: 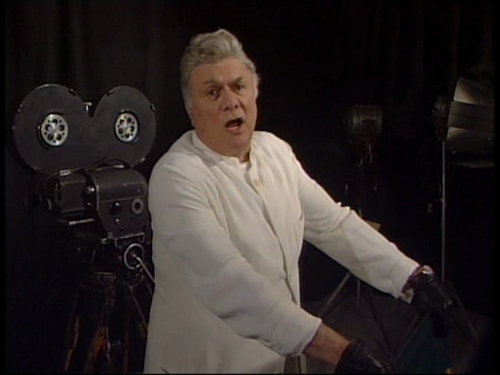 Then there are pretty extensive credits for that sequence.

For a second I thought it was a horror host like Zacherly. The white coat and black gloves kinda look like a mad scientist. Turns out the menu has an intro too with him talking about Bronson’s career, but the movie auto-plays without it when you start the disc.

Due to this presentation I don’t know how nice the movie could actually look, but there are some good filmatistical touches, like an amazing POV shot of a real horse-lassoing. 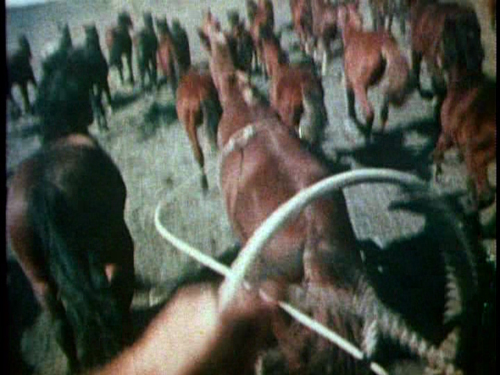 And I really like the music. There’s a great, appropriately bittersweet folk theme song that it turns out is called “Freedom Rainbow.”

And the rest is kinda mariachi-ish guitar, kinda happier sounding than many westerns. Good stuff by Guido and Maurizio De Angelis, sometimes credited as “Oliver Onions” on other movies, which I can respect.

This was the fifth and final collaboration between Sturges and Bronson, and the only one where Bronson got top billing. It was a great time in his career, his project released right before MR. MAJESTYK (the movie, not the regular commenter here) and DEATH WISH (the movie, not the thing that reckless people have). For Sturges it was late in the game; he followed it up with McQ and THE EAGLE HAS LANDED before retiring.

It’s adapted from a novel called The Valdez Horses by Lee Hoffman. Screenwriter Clair Huffaker also wrote 100 RIFLES, THE COMANCHEROS and the novel that was the basis for FLAMING STAR, that western starring The King.

Charles Bronson Charles Dickens Clair Huffaker Dino De Laurentiis horses Jill Ireland John Sturges Tony Curtis
This entry was posted on Friday, September 19th, 2014 at 12:28 pm and is filed under Reviews, Western. You can follow any responses to this entry through the RSS 2.0 feed. You can skip to the end and leave a response. Pinging is currently not allowed.