Oh, and by the way Pacer is played by Elvis Presley. You know, the singer. I should’ve mentioned that probly. That might be relevant to how you’ll react to this one. 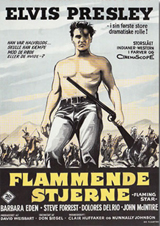 That’s why I rented FLAMING STAR – when I realized there was a Don Siegel/Elvis team up I wanted to know how that works. The opening credits have Elvis singing the title song, and really early on he picks up a guitar and leads everyone in a singalong. So you’re figuring it’s a regular Elvis musical in a western setting. But then there’s a violent massacre with flaming arrows, and it’s a straightup western from then on. It just happens to star the King of Rock n Roll.

Elvis rides a horse and wears a cowboy hat and everything that being in a western entails, but he doesn’t try to hide his iconic persona. He’s still got the slick pompadour, still talks like The King. I guess Elvis is one of these guys like The Three Stooges, or like Mickey Mouse or the Muppets. He can travel through time, exist in different histories. There could’ve been an Elvis movie about the Crusades, about Shinobis, about the American Revolution or the construction of the Pyramids, and he’d be exactly the same dude, he’d just have different clothes on, that’s it. I like that. I think he deserves to have that power. I wish I could see those movies.

And you know what, there must be some kind of T.C.B. magic that makes it work, because somehow I accepted him as the half breed. You know, he has real dark hair. Seemed to make sense. Looks more Native American than Tom Laughlin, anyway. (In fact, his great great great grandmother was full-blooded Cherokee. I looked it up.)

It’s weird, but this movie fits into a couple of the themes I was writing about a month or so ago. Like THE BLIND SIDE it’s a very favorable portrayal of mixed race families. Also like THE BLIND SIDE it’s a good message held back slightly by problematic Hollywood traditions (in this case putting white people in makeup instead of hiring Native Americans). Also the message gives some serious ammunition to the argument that Chuck D. shouldn’t have called Elvis a racist (as discussed in the ELVIS PRESLEY GLADIATORS thread).

Pacer goes through the whole range of reactions to his predicament. He tries to transcend race. He tries to stick with the whites. When his (SPOILER) mother is killed he lashes out at everybody, even his brother, about all the racism he’s suffered throughout his life. Ultimately he gives up, but tells his brother that “Maybe some day they’ll understand people like you and me.”

Don Siegel Elvis Presley
This entry was posted on Sunday, March 28th, 2010 at 11:18 pm and is filed under Reviews, Western. You can follow any responses to this entry through the RSS 2.0 feed. You can leave a response, or trackback from your own site.