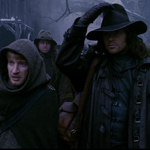 You know what else would be a great idea would be if we chose some random shitty director, like say the guy who did THE ADVENTURES OF HUCK FINN with Elijah Wood. And we give him, like, hundred million dollar budgets to keep making movies every couple summers, just to see what kind of stupid shit he comes up with. And then we keep pretending what he made was of a professional level of competence, just to totally fuck with the guy. Like, a real life TRUMAN SHOW. Everybody’s in on it. Funny stuff. 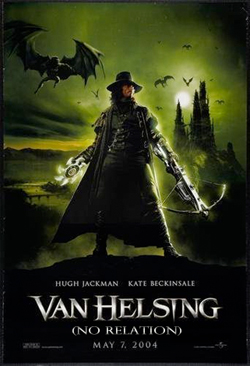 Dracula (Richard Roxburgh) is the super villain in this. He has his three brides, which is cool. In this version they keep sprouting CGI wings and morphing back and forth between pretty lady in a dress and naked bat monster. (Their dresses are part of their skin, or are also vampires, or… I don’t know.)

I guess these type of bats are not mammals, because at some point they laid thousands of slimy green egg sacs on the ceiling of Castle Dracula. This goes back to Roland Emmerich’s Hugely Misguided Rule of How to Make a Good Blockbuster: all big monsters must be replaced with a swarm of identical fake looking CGI monsters.

But the babies have some health problems that require the aid of Dr. Frankenstein’s breakthrough research in electricity. They die quickly, and Dracula knows that if he creates a full Monster Mash by capturing Frankenstein’s monster alive then somehow that means he can use the lightning tech to make the babies live and take over the world. Or whatever you do with those things, I mean who the fuck knows.

Van Helsing (Hugh Jackman) works for the Vatican. I prefer rooting for the Mom & Pop vampire-slaying outfits like Blade and Whistler got going, but that’s okay. The corporate office in Rome sends Van Helsing to stop Dracula, he brings the friar guy (David Wenham), who provides “comic” relief in the tradition of other Sommers or Emmerich movies, like he’s a big scaredy cat the whole time, but he does manage to kill one bat monster or something so a pretty lady starts following him around and he gets laid. I guess Sommers was the one guy who saw THE FIFTH ELEMENT and said you know what, say what you will about it but that monk that kept fainting, that was a great idea.

Along the way they meet and team up with sexy badass Transylvanian princess Anna Valerious (Saturn Award nominee Kate UNDERWORLD Beckinsale). She’s able to help because Transylvanian horses are really fast. One dramatic conflict I genuinely like is that when they find Frankenstein’s monster (who never gets a name, but they’re polite enough not to call him “the monster” to his face) tells them they need to kill him to save the world, but Van Helsing won’t do it because he recognizes that he’s not evil and that he has a right to live this life that was given to him. And he stands by this even when the Vatican says otherwise.

The problem with this movie, and the reason I purposely skipped it 9 years ago, is Sommers. I wrote him off after THE MUMMY and I was right to do it. My views have softened since enjoying GI JOE: THE RISE OF COBRA, but if I’m gonna be honest with myself I kinda enjoy that in a condescending outsider art kind of way. It’s mindlessness and bad taste is most of its charm. This has some of the same unbridled ridiculousness, but his version of that works better on an army-men-and-ninjas toy commercial adaptation than on an homage to classic horror. That genre requires a certain sense of atmosphere and tone, and this is a director whose control of those things is about as precise as a guy trying to type fast wearing thick leather gloves.

This is subjective of course, but my beef with Sommers is that I think he has terrible god damn taste. I mean, on paper we’re into the same things – monster movies – but when you see his idea of a cool monster you realize it was all a big misunderstanding, we were talking about two totally different things. I was talking about Abraham Monster Movies, he was talking about Gabriel.

So Sommers goes through a bunch of the classic monsters and “re-invents” them to be less iconic and appealing. Out of manners I’m gonna start with the best, which is Mr. Hyde at the beginning. From what I’ve heard this scene didn’t go over well at the time, and they don’t bother to use his split personality or anything, but I say it’s better than the other ones in this movie. For some reason he’s a CGI character: 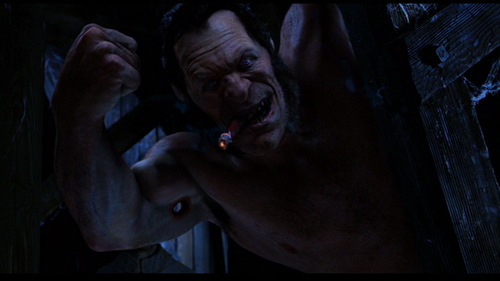 And like everybody in this movie he likes to swing around on things like a monkey. That’s kind of the premise of this I guess: “what if there was a world where there’s monsters and everybody likes to climb on things and swing on ropes?” Even clunky old Frankenstein’s monster has a climactic sequence of swinging over a pit for several minutes holding onto a chain with one arm. It’s weird. Anyway, as stupid as Mr. Hyde here is I can’t think of another digital effect in the entire Stephen Sommers filmography that looks as technologically competent. Kind of reminds me of the giants in JACK THE GIANT SLAYER, a big rubbery cartoon character instead of the shiny abominations he usually prefers. The effects guys must’ve done this scene without running it past him.

Dracula is the worst. He’s a smarmy long-haired guy (sometimes with ponytail) and occasionally slides into a version of Lugosi’s accent, or Peter Lorre’s. There’s nothing cool or scary or seductive about him. A bad Dracula and a bad lead villain. 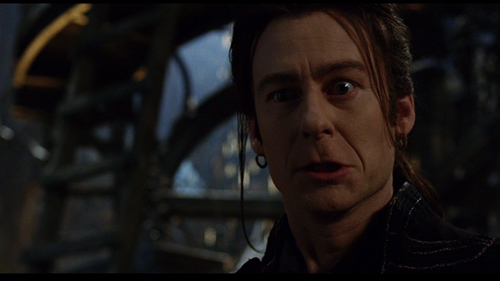 The werewolves are stupid too. They’re all CGI, of course, showing off Sommers’ trademark how-the-fuck-did-he-have-ILM-and-a-big-budget-but-end-up-with-something-this-shitty style of visual effects. 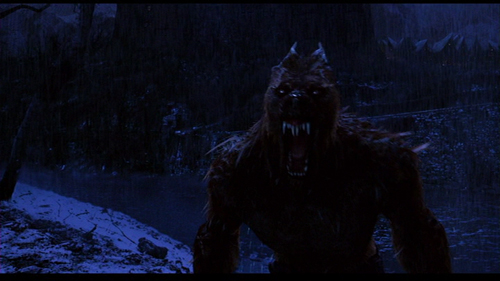 I might be okay with their inherent fakiness if they moved better, but Sommers prefers the weightless, constantly leaping approach to monster animation. This still is a rare standing-up-straight moment.

I do like the idea of the transformation sequences, where the wolf tears off his human skin to reveal fur beneath. So I give credit for that. But it should look better.

Then there’s Igor. He’s not computerized, but this is what they came up with for his look: 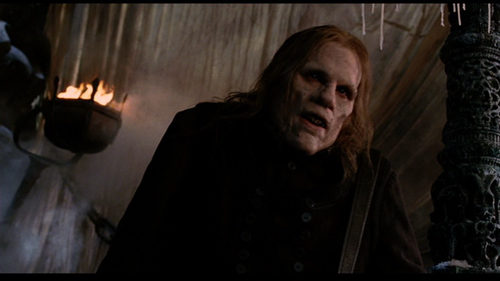 The most frustrating is Frankenstein’s monster, ’cause I actually like his characterization here. This is a version inspired by the more eloquent monster of the book. In the prologue (black and white but over-the-top – must be a pretty fuckin big village to have that many angry villagers) he somehow makes it from the castle to the windmill, climbs to the top and screams “WHYYYYYYYY?” with a voice like an opera singer. It represents a poetic soul inside a grotesque body, a tragic figure who only wants to exist in a world that is too disgusted to let him. That includes me, because he fucking looks like this: 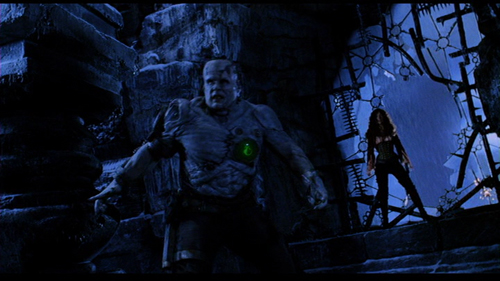 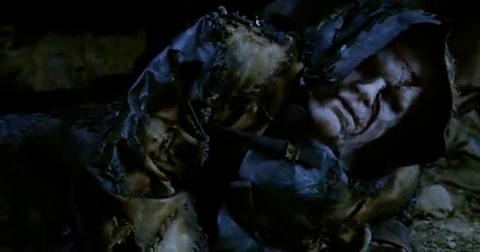 Sometimes he wears a coat stitched together from multiple coats, as if this brilliant doctor was too stupid to figure out he could just sew him a bigger coat. He has orbs on his chest and head that glow green like some shitty off brand toy. He just looks stupid. I bet Sommers draws shitty thumbnails of these monsters, then an army of talented artists shrug and come up with their souped up versions of his, then he points to the two or three ugliest ones and tells them to combine them. His aesthetic is a junkpile, his frames crammed with ugly. If the individual elements look good, like a castle or something, his lack of composition’ll take care of it. Just pile some crap on. And when you’ve got too much now it’s time to dump a couple barrels of candles and cobwebs on top of all that shit. 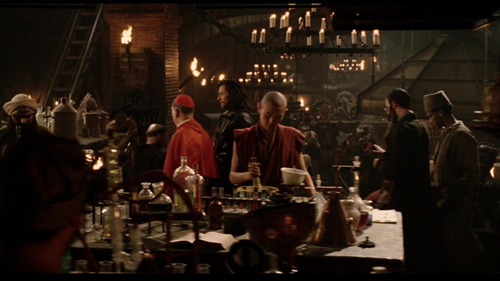 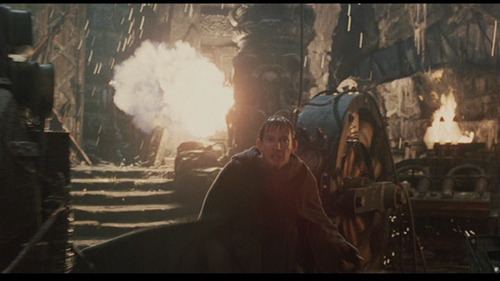 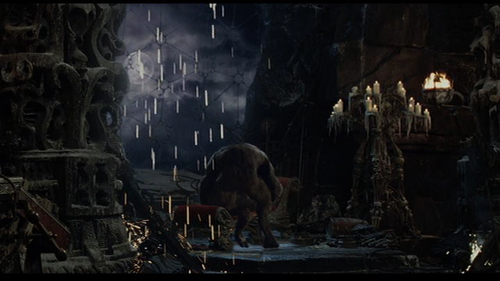 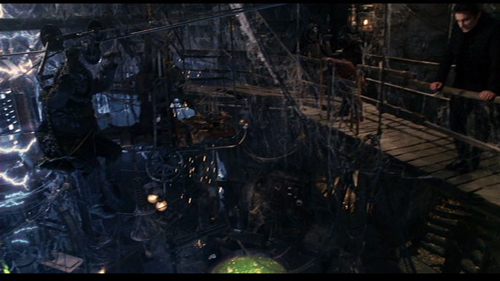 So this movie is shitty, but I dig the idea of it enough that I got a little involved by the end. If it was directed by somebody who could make a good looking movie I might’ve been into it. There is one scene I really enjoyed where Van Helsing is transporting the monster in a horse drawn carriage, and the bat ladies attack and knock it off a cliff but they need the monster alive so they chase after it and try to pull him out but then it crashes and explodes stakes into one of them because actually it was a decoy and the monster is safe inside a different carriage. “STAKES!” she screams, in case you are not familiar with what stakes look like and are wondering what those things are that are flying at her.

(I always heard about this scene as if a non-gas-powered vehicle somehow exploded like a car on CHiPs, which sounds hilarious. But I’m pretty sure it’s supposed to be rigged with explosives. The science checks out.)

There’s another scene, better in idea than execution, where Van Helsing takes over for a trapeze artist at Dracula’s opulent Halloween masquerade ball, and the friar guy bumps a flame swallower to set Drac on fire. The whole scene has terrible compositing though. This must be how most movies look to my anti-CGI reactionary friends.

Man, I would love to love this movie, but I guess I just don’t see eye-to-eye with Sommers when it comes to what to put in front of said eyes.

Dracula Frankenstein Hugh Jackman Kate Beckinsale Kevin J. O'Connor Richard Roxburgh Stephen Sommers vampires werewolves
This entry was posted on Monday, August 19th, 2013 at 11:21 am and is filed under Action, Fantasy/Swords, Horror, Reviews. You can follow any responses to this entry through the RSS 2.0 feed. You can skip to the end and leave a response. Pinging is currently not allowed.