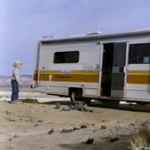 See, it’s a double meaning. Death Valley, like the place. That’s the location of this story. But also Death Valley. Like death, you know? I think you get it.

Slasher Search 2012 has been pretty productive in my opinion, but not in the usual area. I haven’t done good on the older slashers. I’m just looking for a pretty fun FRIDAY THE 13TH or HALLOWEEN ripoff with a few twists or odd idiosyncrasies, you know? I’m not asking for the world. But every time I find one there’s one less out there that I haven’t seen, so it’s harder every year. Anyway, this is the last of this year’s VHS rentals, might be my last shot.

DEATH VALLEY is the story of a nerdy little kid named Billy (introducing Peter Billingsley) who, against his wishes, has to leave his dad in Echo Park and stay with his mother (Catherine Hicks, practicing horror movie mothering to get ready for CHILD’S PLAY) and her cowboy boyfriend (Paul Le Mat) in Arizona. Billy is dealing with the spooky horror of divorce, his poor dad (Edward Herrmann) trying to explain to him the concept of falling out of love, the poor boyfriend trying his damndest to connect with him but getting the cold shoulder. There are some very relatable moments of the boyfriend being very nice to the kid and then turning away and obviously being bummed to be getting the gas face and to not be able to enjoy time with his lady ’cause even if he just holds her hand this little shit is gonna pout up a storm.

And there’s a class thing going on. Billy kinda likes the toy guns and cowboy shit that all the Arizonans like to ply him with, but he also makes fun of how they walk and compares them unfavorably to his dad, who he likes to note is a Princeton professor. Also Billy is more educated about the history of Jesse James and Billy the Kid than the boyfriend is, so he rudely corrects him at one point when the guy’s just trying to be a cool adult and get him excited about something. 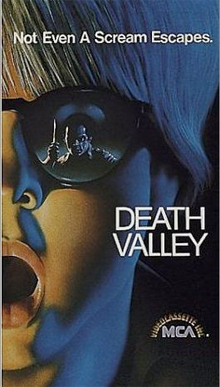 Oh by the way this is a horror movie so there have been some murders in the area where they’re staying. We see somebody stabbing people in an RV, and later Billy wanders up to the same RV and snoops around, but doesn’t find the bodies. He does find a necklace which he swipes, accidentally tying himself to a serial killer.

This is not a Final Girl type of movie, but the kid does take on some of the Final Girl duties. He’s the observant one: he sees the spooky car following them on the highway, the name of the RV, the waiter whose necklace matches the one he found. And okay, he’s a virgin, I’m pretty sure. So maybe there’s something to that after all.

The killer is played by Stephen McHattie, who’s really intense in this. He’s a cowboy who pretends to be nice, but probly knows he’s intimidating people. There’s a scene where he’s a waiter taking Billy’s order, and you’re thinking I can’t tell, is he taking his order or is he threatening him? I think this waiter might be threatening a little boy. But maybe he’s just getting him a hamburger and french fries. I can’t be sure. My favorite part is when Billy is hiding from him in the bathroom, and he pretends to think he’s stuck in there and needs help. “I’ll tell ya something Billy,” he says gently. “We got a hollow door here, made in Japan. Billy I could bust through this really easy, but it would cause a mess, so what I can do is I can get the molding off, and I think that’s the way to go. Are you all right in there?” So much more subtle than “Here’s Johnny.”

Wilford Brimley (credited as A. Wilford Brimley) shows up as the sheriff, who seems to be good with kids and has a need to solve these murders. This was before Joe Arpaio I think. There’s a part where he talks about being too old for this shit, which I thought was funny because this was 30 years ago and the guy is still kicking around somewhere. You can’t stop him. Anyway it’s always good to see ol’ Wilford, but ultimately the movie becomes a cat and mouse game between one cat, one small mouse, the mouse’s mom, and the mouse’s mom’s boyfriend, who maybe will earn the young mouse’s mouse trust during this ordeal, if they don’t get eaten. We’ll see.

(and I think that “eaten” might be literal, because when he doesn’t answer a question about what he’s cooking I take that to mean he’s cookin up people meat.)

The kid really is the main character, so at times it almost seems like it could be a kids movie, but there are some boobs and some blood, so not really. I guess it’s tamer than most slasher movies, but it’s pretty solid, well put together, shot on location in the real Death Valley, I think. And I like the way it ends. Not the revelations but just the last little moment. A simple pay off to the small character drama that has been going on.

I picked this out by looking at some of the horror movies that are still only on VHS, and discovering that this one was from the director of the Burt Reynolds movie HEAT that I liked. His name is Dick Richards. The writer is Richard Rothstein, who did the first UNIVERSAL SOLDIER. This one won’t be a VHS oddity for long though because it turns out it’s coming out on blu ray and DVD this December from Scream Factory.

Catherine Hicks Dick Richards Peter Billingsley Richard Rothstein Slasher Search slashers Stephen McHattie
This entry was posted on Wednesday, October 31st, 2012 at 2:22 am and is filed under Horror, Reviews. You can follow any responses to this entry through the RSS 2.0 feed. You can skip to the end and leave a response. Pinging is currently not allowed.