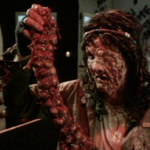 This was the first one by director Paul Ziller. Alot of the guys who directed these types of slashers have a handful of other IMDb credits at most. This guy went on to do BLOODFIST IV, BACK IN ACTION, SHOOTFIGHTER II among other action and thriller type business. In the 2000s he’s become more of a SyFy type with SNAKEHEAD TERROR, SWARMED, BEYOND LOCH NESS, YETI: CURSE OF THE SNOW DEMON, STONEHENGE APOCALYPSE… He’s still at it, having recently done a TV remake of THE PHILADELPHIA EXPERIMENT. The script is by Joyce Snider, whose other four IMDb credits are all pornos: PUBLIC AFFAIRS and RAW TALENT I-III.

PLEDGE NIGHT begins as a competently made fraternity movie, doesn’t necessarily feel like horror. Could be like an ANIMAL HOUSE or PORKY’S type of comedy, you don’t know ’cause there’s not an opening murder. Some visibly younger kids are trying to get into this fraternity, the older kids are doing your usual perverted, sicko cruelties to them: making them stick cherries up each other’s butts and then eat them, trying strings to their dicks, spanking their bare asses with paddles, sticking their heads in toilets, making them eat worms, making them think they’re having their asses branded like cattle (and in one case actually doing it), making them listen to boring speeches.

The boys are sitting down at the dinner table hearing how they’re gonna have to stay in the frat house over the weekend or something, and they hear loud sobbing from upstairs. And for them it’s this “oh shit” moment: do we have to stay in the house with Dan?

Yes, this guy Dan (Arthur Lundquist) is very disturbed, they explain that he has a brain tumor that messes up his sense of reality and he has to get surgery on it and that’s why he’s crying all the time.

Dan comes down and has dinner with them, and he seems very distraught, and it’s uncomfortable. When one of the frat brothers tries to calm him down Dan stabs him and runs off, there is total chaos and they have to drag the stabbed brother out of there and rush off to the hospital.

And it’s a bit of a rush for the movie, a sudden injection of mayhem and unpredictability. Is this really where the story is going? This doesn’t follow the template. I like it! Or…

Yep, as I feared, this is just a prank that the fraternity does every year, a different guy pretends to be a madman each year, it’s part of the initiation. Oh well.

(Interestingly they say they use chicken blood for the fake blood. This is 1990, they could definitely find some store bought fake blood, or make some themselves. But I guess they go all out.)

It takes forever to turn into a horror movie. For a while it just sticks with the various hazing rituals and starts dropping in some backstory via one pledge’s mother because she’s “this over the hill hippie. She doesn’t realize the ’60s have come and gone” and she’s concerned about him pledging. She says that back in the ’60s a kid was killed in this very frat house because they were supposed to dump him in a bunch of slimy goop but it had acid in it so it killed him. We even get a flashback, and the pledges I guess are supposed to be hippies, but they look like heavy metal guys to me. The score to the movie is by Anthrax, so I thought it might be them in a cameo. Turns out it’s just the guy that gets dunked, Sid, is played by Joey Belladonna, second singer for the band. 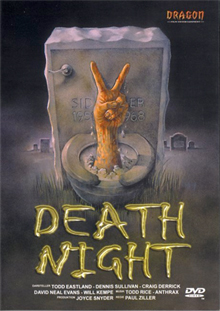 When the horror does finally show up it’s in the form of a monster hand reaching out of a toilet to grab a guy while he’s taking a shit. Ha ha evil spirit, you sure showed that guy by killing him after you let him shit on your face. Then there’s a shot of the hand just giving a peace sign. To us, I guess.

Confusingly, it’s right around this point in the movie where Dan, the fake crazy man, grabs one of his brothers and stabs him with two screwdrivers. Like he’s getting too deep into character. I thought wait a minute, are we dealing with a vengeful ghost/zombie type deal and a crazy murderer, just coincidentally happening at the same time? But later Dan buckles over and “Sid” (now played by Will Kempe from Whit Stillman’s METROPOLITAN and THE LAST DAYS OF DISCO, not from Anthrax) bursts out of him ALIEN style. But he’s different from an Alien because in this one scene he has the ability to shoot a fireball from his hand. Aliens never do that.

Wait a minute, was it Dan who was taking the shit on Sid? Maybe Sid went up his ass? No, I thought he killed that guy. I don’t know. I don’t want to rewind it.

Well, there’s a funny setup for this part of the movie. The pledges are in the basement and if they leave it they’re supposed to fail the initiation. One brother is standing with a coffin and a ritualistic backdrop giving the pledges a speech about the history of the fraternity. But they keep hearing insane giggling and blood curdling screams from upstairs. The brother is confused and the pledges think it’s trying to scare them into leaving the basement. The truth is that Dan is going around murdering people, for example drilling a girl’s head with an electric hand mixer. Personally I do not believe that would work, but maybe they had a really high quality mixer, I don’t know.

One of Dan-possessed-by-Sid’s techniques is to stick a cherry bomb up a guy’s ass, a violent parody of the earlier “cherry race” where they had to sit down on cherries and use their asses to transport them to different locations. When Dan pulls the brother’s pants down the brother asks “What’re you queer?” So they did get in one little dig at frat brothers who are macho and homophobic but also obsessed with each other’s butts. But that’s about it. Because of the Anthrax connection I gotta assume this was made by heavy metal fans, who I’d expect to make a more aggressively anti-fraternity movie than this. But maybe I shouldn’t make assumptions.

I think they were trying to make this in the Freddy mold. Supernatural killer known by first name, backstory where he was wronged, electronically lowered voice, back for wisecracking bloody revenge. But even Freddy would groan at this asshole’s jokes, which are more like just references to cliches about hippies. “WHICH WAY TO THE PROTEST? HA HA HA HA HA!” is one of his lines. And there’s a part where he says “That’s for Spiro Agnew!” Are you kidding me? Will we some day have a horror movie monster who just complains about Donald Rumsfeld and Paul Wolfowitz?

He’s just stupider than Freddy, and he doesn’t look cool, just a cartoon hippie with boils all over his face, a lower budget, skinnier Toxic Avenger. Plus, I don’t see how the ’60s theme fits at all. Just because it was the ’60s why are the frat brothers hippies? If this guy was a politically obsessed war protester guy would he really try to get into a fraternity? I don’t really see the thematic connection here, it doesn’t work.

I’m glad it’s not an all out comedy, it was trying to be a serious horror movie with some humor here and there. And one part was kinda funny:  a pledge who gets burnt by Sid’s toxic hands says, “I’m suin’!”

But this is not a good movie. Swing and a miss, Slasher Search. I’m mixing in a baseball metaphor along with the hippies and fraternities. Why not? Who cares? It doesn’t have to make sense.

Anthrax fraternities Paul Ziller Slasher Search slashers Will Kempe
This entry was posted on Tuesday, October 30th, 2012 at 1:53 pm and is filed under Horror, Reviews. You can follow any responses to this entry through the RSS 2.0 feed. You can skip to the end and leave a response. Pinging is currently not allowed.