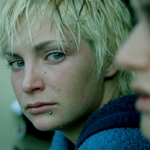 I don’t know if this is on purpose, but the basic themes are set up in a meta kind of way in the opening, because of the way it resembles the opening of A NIGHTMARE ON ELM STREET. The hands of an unseen man are building something sinister in a dark basement… but no, it turns out he’s not making a bladed glove or anything. He’s hanging himself.

Then it’s one of those “skip to the climax” deals where one of our characters is bloody in the street and asking for help, and we jump back 4 days to see what led us to that unexplained situation of horror.

And then we get the opening of THE POOL: group of young friends getting their final exams (you really have to meet with a board of teachers and convince them you learned something? We don’t have that here), one did worse than the others, then school’s out and they all celebrate and drink beer and drive around fast and listen to pop punk music. Notably, every one of these actors looks ten years younger than the ones in THE POOL, so I stand by my complaining about their ages.

The kids go drinking and dancing, one goes to the bathroom while his girlfriend waits for him, and he never comes back. The pixie-ish girlfriend Nina (Sabrina Reiter) becomes our lead I guess just by virtue of not having had to take a piss first. She tries to convince first her friends and then the police that something is going on here, but only her friends believe her until they find the body. And then the rest of the people who got the message are in trouble, and they have to figure out who the hell is doing this so they can stop it. 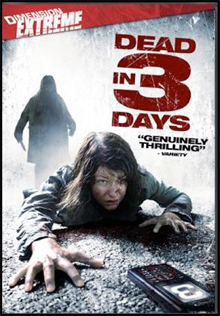 We don’t know that much about Nina and her friends, but they’re very sympathetic because of very natural acting and believable reactions. I think this movie takes death a little more seriously than most slashers, so the grieving feels very real and all the family and friends come together to try to support Nina and the police try to protect her. It feels very different from SCREAM but I guess it’s kind of similar in that these murders take place over a few days in a community as opposed to out in the woods or the boondocks somewhere with nobody knowing.

It’s not Rob Zombie rub-it-in-your-face violence, but it’s not FRIDAY THE 13TH fun kills either. The horror showdowns are limited, but when they happen they’re tense, well constructed, beautifully shot and painful. You don’t want these people to get it, and you feel it if they do.

I would like to give a special appreciation to the moment early on when a character complains about the sharp edge on a fish tank at work and says someone is going to cut themselves on it. This is not something that would usually be set up, and if it was it would usually not be until the scene where somebody’s gonna get cut. But this movie fiendishly leaves it hanging for like half the movie. I love it.

Like in many movies there’s a cop they know who they first go to (Andreas Kiendl), who doesn’t believe them and acts like an asshole. What’s cool is that after the kids turn out to be right that their friend has been killed he feels hugely guilty and makes it his mission to find the killer. It’s not really his fault, it was probly too late by the time they went to him anyway, but he carries this “oh shit, what have I done” look on his face throughout the movie, and it made me sympathize with him.

PARTIAL SPOILERS THIS PARAGRAPH. Just yesterday I was talking to a buddy about the I KNOW WHAT YOU DID LAST SUMMER movies and how he found himself rooting for the killer, because these kids ran over somebody and lied about it, how were you supposed to side with them? Well into DEAD IN 3 DAYS the kids start to suspect this has to do with an accident that happened when they were little asshole kids. But by this point we’ve already connected with these kids, and we don’t even find out the specifics of what happened until later, so maybe this would work better for my friend. The backstory also leads to one of the most original parts of the movie: when they finally come face to face with the killer they feel so guilty they have trouble defending themselves, they just want a peaceful solution. And the ultimate scare in this is being guilty and looking into someone’s face and seeing no sign of understanding or chance of forgiveness.

I definitely recommend this one, this is solid. It turns out there’s a DEAD IN 3 DAYS 2 from the same director. Not sure how that would work, but I hope I can see it. (Not available in the U.S. as of this writing.) 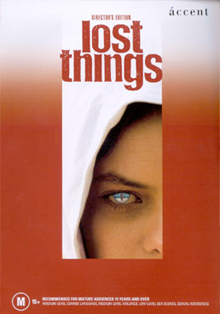 I also watched a code 4 import of this Australian movie, but I don’t have that much to say about it so I’m gonna tuck it into this review.

LOST THINGS is also about the young people. Two boys and two girls sneak away from their parents, go on a trip to an isolated beach to surf and hang out. These actors actually look very young, almost too young for a horror movie, one of the boys is walking around shirtless with no chest hair. But they really look and act like normal people, not actors, only one of them is particularly good looking. So that makes it kinda relatable I think.

They think they’re all alone until they run into an older, more macho dude who tells them they shouldn’t be there and scares them about some kids that were murdered around there, but they decide to stay anyway.

Some weird things start to happen, but mostly editing tricks: they will see one of their friends standing further down the beach, wonder what they’re doing there, look at something else, then look back and the person is gone. This gets repetitive, I think it happens at least four times in a short movie, each time less effective. But it does set up a pretty cool trick later on when they mess with the timeline and sort of explain what happened there.

The photography (digital I believe) is nice and shows off a part of Australia I don’t remember seeing in other movies. It looks different from American beaches at least. It’s pretty clever in some of its reveals of what’s going on, and some people might find its simplicity and minimalism refreshing. It’s kind of like an Australian BLAIR WITCH PROJECT, but more colorful (it mostly takes place in daylight) and thankfully not found footage style. Also I’d say it has a touch of CARNIVAL SOULS, which is a good thing.

But for me it was kinda too small, too little. I was with it for a while but didn’t feel like the pay off was enough. And then I wrote a short summary of my feelings about it at the end of a review of a movie I liked alot better. The end.

Australian cinema Austria Slasher Search slashers
This entry was posted on Wednesday, October 31st, 2012 at 12:48 pm and is filed under Horror, Reviews. You can follow any responses to this entry through the RSS 2.0 feed. You can skip to the end and leave a response. Pinging is currently not allowed.

6 Responses to “Dead in 3 Days (plus bonus mini-review: Lost Things)”