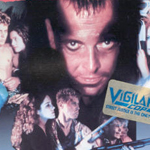 Here’s another one that doesn’t really fit the slasher definition I was looking for, but it’s such a better version of kind of the same premise as HIDE AND GO SHRIEK that I welcome it. This one is Australian, the directical debut of Stephen Hopkins, whose second and third films were A NIGHTMARE ON ELM STREET 5: THE DREAM CHILD and PREDATOR 2.

A group of Australian teens – handsome guy with convertible, girlfriend, new wave nerd, girl named Ziggy he has a crush on – plan to hang out after school. But first they have a conflict with Officer Murphy (Steven Grives), a local cop who has it out for the kid with the car. He hates him so much he shifts his car into neutral and rolls it into a no parking zone just to give him a ticket.

That night they’re hanging out and the new wave nerd, who is also good with computers, is showing off his ability to hack into various computer systems. He has a bet that he can get the doors to open at a local department store. It actually works, so next thing you know they’re all sneaking into the place to explore.

The horror element comes when Murphy sees their car and comes after them. The movie has already branched off to show some of his story – it turns out he’s not just an asshole who hates these kids, he’s also genuinely disturbed. The other cops think he’s a fucking asshole too. He gets in a fist fight with another cop. He causes a PEE-WEE’S BIG ADVENTURE style motorcycle pile up while chasing these kids. He’s out of control.

So he comes into this store and instead of trying to arrest them or warn them or something he decides to scare them. He spies on them for a while before running out wearing a mask and a wig and swinging a baseball bat around crazily.

In the tradition of DAWN OF THE DEAD this is a store with many useful horror movie items including a sporting goods department with guns, ammunition, crossbows and knives. Proud of his scaring skills Murphy laughs and playfully throws a knife at a target – but hits ones of the kids. Whoops.

So what makes this not really a slasher movie is also kind of the most interesting part: this is a very conflicted bad guy. He didn’t kill the kid on purpose. He’s horrified when he does it. He runs over to check on him. He cries. But also he’s fuckin crazy. He almost calls it in, then decides to go after the kids instead. He’s at the end of his rope, contemplating suicide. There’s a scene where he just screams and destroys security equipment for a couple minutes straight. Sometimes he talks to the kids and we see what he sees – imagining them giving him evil commands instead of hearing what they’re actually saying. Creepy stuff. 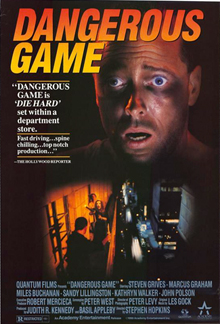 The cover here is pretty funny ’cause it has that quote comparing it to DIE HARD, and the picture kind of looks like the guy is supposed to be a Bruce Willis lookalike. But it’s not like DIE HARD unless you imagine that Murphy believes these innocent kids are deadly terrorists and he’s the only one who can stop them. And that’s why he finds all the weapons he can and tries to capture them and then blow up the building.

It’s a beautiful movie even on this pan and scan VHS. The store is huge and detailed and the main room is dark with yellow light bleeding in from big windows with rain always rolling down them. It’s the kind of movie where the camera moves around slowly, watching the characters from a distance, making you feel paranoid that they’re being spied on. And there are some nice fancy camera moves like when a character steps off the building and we see an overhead shot of him landing on a ledge below.

A few times they kind of overdo it with the extravagance of this department store. I guess I’m willing to forgive that for some reason there are working dirt bikes on display, since that means there are motorcycle stunts in the movie. But I’m against the row of oversized, cackling jack in the boxes. That one’s too much like something out of a Batman cartoon or something. And the giant wedding cake prop. But oh well.

There’s not alot of stalking and “kills” like a legit slasher movie, but the characters are likable, the cinematography is excellent, the filmatism is strong, there are some good action parts and the villain is multi-layered and interesting. Not bad for a director who will go on to direct LOST IN SPACE.

Australian cinema Slasher Search Stephen Hopkins
This entry was posted on Tuesday, October 30th, 2012 at 1:01 am and is filed under Action, Horror, Reviews. You can follow any responses to this entry through the RSS 2.0 feed. You can skip to the end and leave a response. Pinging is currently not allowed.