The opening scene is basically the same. Mickey and Mallory in a diner, Mickey eating key lime pie, Mallory dancing to the jukebox (she steals the quarter from a Jerry’s Kids donation jar), some rednecks move in on her and it turns into a bloodbath.

Then it’s a credits sequence of Mickey and Mallory driving. Tarantino writes that “the b.g. is an outrageous PROCESS SHOT,” which he probly didn’t realize would turn into the constant outrageous process shots throughout the whole movie. Tarantino later used something similar as the opening credits of KILL BILL VOLUME 2.

Scagnetti and McClusky (Tom Sizemore and Tommy Lee Jones in the movie) are introduced immediately after the credits, basically the same scenes that show up an hour into the finished movie. (McClusky, though, is a parole board member who the movie economically combines with another character called Wurlitzer in the script.) Headline stealing cop and best selling author Scagnetti – “A hell-bent lawman with a deadly axe to grind with maniacs” says the back cover of his paperback – has been called in to oversee the transportation of Mickey and Mallory to an insane asylum, so he can heroically blow their heads off if they try to escape. The two are already incarcerated, and Wayne Gale is negotiating for an interview with Mickey. 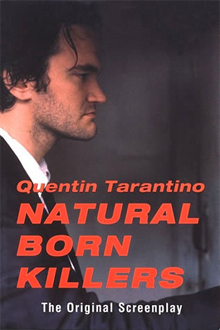 The scenes are basically the same as in the movie from what I can remember, but the placement makes a huge difference: in the script, Mickey and Mallory are not the protagonists. They’re primarily seen through the mythologizing of the American Maniacs episode that makes up the first half and change of the movie. Gale tells how they killed Mallory’s parents (because they disapproved of the marriage – no mention of abuse), always leave one witness to tell the tale, etc., while pretending to be outraged and hypocritically complaining that “their subsequent trial turned into a sick circus.”

There are scenes of Gale preparing with the staff, planning the interview. Then it goes into the actual American Maniacs episode, which goes through page 77. After that it doesn’t switch to Mickey and Mallory right away – it’s more scenes about Gale and crew preparing for the big interview, until it gets to a little scene with Mickey and a version of the one that’s in the movie where Scagnetti harasses Mallory in her cell and gets smacked.

I think Mickey is supposed to be more intelligent than he ended up in the movie. He surprises everyone with his skills at representing himself in court, and spontaneously quotes the poetry of Edgar Allan Poe. The actor who plays him in a movie describes him as “a little cerebral for my taste.” Mallory is more mysterious. She doesn’t talk between pages 12 and 124, when she’s away from Mickey. She’ll only sing and dance.

Their “Wagnerian love story” is better crafted here, because forbidden love is their main arc. They start their killing spree because of parental disapproval of their marriage, and the only way the judge can figure to punish them is to forbid them from ever corresponding or hearing about each other again, even when one of them dies. We hear that when Mallory was interrogated all she would say was “I love Mickey,” and that she hasn’t said a word since. When Mickey writes his letter to Mallory it’s a letter he can never send, but she seems to receive it telepathically because she starts singing a song that he mentions. When they do reunite it’s a big moment not because they’re escaping together, but because “This kiss has been a year coming. Now they’re doing something everybody told them they would never do again. For this moment they are the only two people on earth. We are enraptured, too. CAMERA does a 360 AROUND the loving couple.”

Tarantino has a fetishistic attention to film formats in the script, even discussing the importance of high contrast 16mm B&W in the dialogue. There’s a logic to it – Gale feels the interview is historically important so it should be on film and not video, but the camera jams at one point, later the camera breaks and they have to switch to video – but it probly gave Stone the idea of the haphazard format-switching, don’t you think?

There are some parts that made me laugh, like when Mickey is using Gale as a human shield and tells him to announce himself as “Winner of the Golden Globe and the Edward R. Murrow Award among others.” Or toward the end when Mallory is yelling at Gale while he’s filming, but she stops and asks if she’s allowed to swear.

For my tastes, the script is way better than the movie they turned it into. It has no more or less depth but is much funnier and more interesting. It has a better story structure to it, establishing at the beginning what the authorities are trying to do, then the legend of Mickey and Mallory, then Mickey and Mallory unleashed on the authorities. The movie version is aimless and could be chopped up and put back in a different order and nobody would even notice it was different. (I guess because that’s kind what they did with the script in the first place.)

If Tarantino had directed it I think he would’ve given more kick to it. For example the scene where Scagnetti unloads an entire bottle of mace on Mallory and then asks for it to be refilled would have that sort of jab to the gut Tarantino achieves with a chopped off ear, an adrenaline shot to the heart, a plucked eyeball, etc. At the time NBK was supposedly shockingly violent (it doesn’t seem like anything much now) but Tarantino’s movies make you feel the violence in a way that (for me anyway) Stone failed to.

But it’s not really a tragedy that they fucked up his script, because I don’t think it would’ve been that great anyway, and he’s done okay with pretty much everything else he ever wrote. This one was probly good practice, and Oliver Stone and crew got those free cowboy boots out of it. So everyone’s happy.

Tarantinoisms: Rockabilly and Duane Eddy mentions. Mallory sings “Long Time Woman” in her cell, a reference to THE BIG DOLL HOUSE that they didn’t use, so Tarantino used it later in JACKIE BROWN. They mention that she’s been singing “She’s a Rebel,” “Leader of the Pack,” “Town Without Pity” and Dusty Springfield’s “I Only Want To Be With You” in her cell. Mickey mentions a number of other specific songs in his letter, I’m gonna have to stop listing them all. Casual use of racial epithets. The cameraman wears a SHE DEVILS ON WHEELS t-shirt. Mention of “Flock of Sea Gulls haircut.” Mickey and Mallory movie-within-the-movie called THRILL KILLERS with dialogue and trailer narration out of an old juvenile delinquent movie. Mickey talks about Bruce Lee and Jeet Kune Do. Alot of talk about pie and fast food. “Looks like we got a Mexican standoff.” References to Pat Garrett, ELDORADO, BUTCH CASSIDY AND THE SUNDANCE KID, RIO BRAVO. Odd words and phrases that he’s used in other places (skullduggery, according to Hoyle).

and of course, this:

The sound of Mallory’s BARE FEET SLAPPING the CONCRETE
floor, along with the CLIP-CLOP-CLIP-CLOP of the deputies’ shoes, reverberates throughout the scene.

Quentin Tarantino scripts
This entry was posted on Wednesday, August 8th, 2012 at 1:49 am and is filed under Crime, Reviews. You can follow any responses to this entry through the RSS 2.0 feed. You can skip to the end and leave a response. Pinging is currently not allowed.