Daniel Bernhardt is a Swiss martial artist and model who appeared in a Versace commercial with Jean-Claude Van Damme, then was hired to play the lead in the BLOODSPORT sequels. So it’s only natural that in 1997 he inherited Van Damme’s frequent collaborator Sheldon Lettich, who had already directed LIONHEART and DOUBLE IMPACT (plus the great Mark Dacascos capoeria-‘n-teaching movie ONLY THE STRONG). But I’m sorry to say the substitute is not as good as the real thing.
The movie begins promisingly with the proud sport of cockfighting. Bernhardt’s character David Benson is sitting in the front, enjoying the bout. Later on at the bar he gets into a scuffle which, not surprisingly, moves across the room and finds its way to the cockfighting ring. 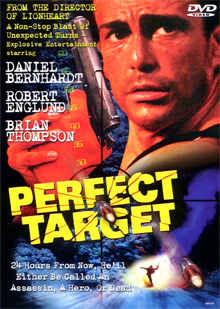 Do you see what’s happening? This is what these competitive fighters are – they’re trained beasts, thrown into a little pen to peck each other apart. As Benson works his way through the sleazy fighting circuit in these Mexican bars, he’ll eventually realize that not everyone has his best interest in–

wait, what? This isn’t a fighting movie? Oh. Never mind. There’s just cockfighting and then there’s a bar fight, two consecutive occurrences that can be seen to have parallels but that are not being compared as any type of statement. It’s just a coincidence. This is about mercenaries.

Brian Thompson (who I think of as a giant Peter Dinklage – is that weird?) and Robert Englund are guys who hire Benson to lead a team of mercenaries in protecting a progressive new leader in a fictional South American country, I forget what it’s called, but it’s not Val Verde.

When the mercs are all being introduced to him I saw this guy on the right: 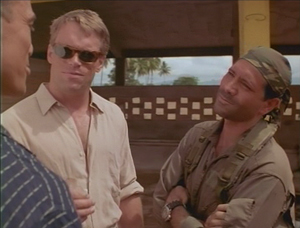 and I was pretty excited that Steve Guttenberg was in the movie. But that only lasted for part of the scene before I realized that’s some other guy. Benson knew it wasn’t Guttenberg so he’s not disappointed, but he is pretty bummed when a government agent named Ramirez (Jim Pirri) shows up and demands to be part of the security team. Benson is an outlaw, a cockfighting fan, he doesn’t like feds.

Benson doesn’t think the new presidente (Mario Ivan Martinez) should even make the speech for safety reasons, but the man is a reformer disgusted by the previous regime’s corruption and mansions, so he strongly believes he has to be accessible to the people. Bad idea, because it turns out it’s the ol’ “hired to protect politician but really you’re gonna be blamed for the assassination” routine.

Tip for action movie characters: if you’re on security detail and they ask you to go up into the clock tower with a sniper rifle there is a possibility they’re gonna set you up.

During the betrayal scene there’s a little moment I like when this guy Mason, who had worked with Benson before in Honduras, is gonna shoot at him and says, “Sorry buddy.” He seems like he’s sincere, he really does feel bad about it. But not bad enough about it that he doesn’t do it and take the money. Pretty mercenary, even for a mercenary. Interestingly, the actor who played Mason, Bob Koherr, went on to direct a ton of TV episodes and, more famously, the movie PULP FICTION. Seriously, check IMDb.

So of course Benson and Ramirez are forced to go on the run together. It’s supposed to be one of those mismatched pairs where they hate each other but begrudgingly learn to respect each other, but neither of them really command the screen or have chemistry with the other. You know what? Hold on.

Yeah, no, that guy directed PLUMP FICTION. That didn’t seem right that he would’ve done PULP FICTION. I’m glad I double-checked that.

So our buddy team ends up at an encampment of guerillas led by Ramirez’s sister (Dara Tomanovich), and they all work together to try to overthrow Isabela Santiago Casillas (Julieta Rosen), the evil wife who planned the assassination so she could take over.

One of the best parts – so maybe skip this if you’re gonna watch it – is when the two reluctant partners come to an impasse and decide they have to throw down their guns (well, only the one guy seems to have one on him) and have it out. It could be described as a knock-down-drag-out fight, but it’s in water so it’s more of a splash-down-splish-out fight or something. Or a rub-a-dub-tussle. At about the point where I wondered if they would try to go as long as THEY LIVE they suddenly stop, hands on each other’s throats, to listen to a sound… 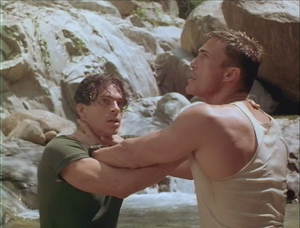 …it’s gunfire in the distance. It turns out that while they were busy punching and tackling each other the whole village got massacred and the woman they were kinda fighting over was taken hostage. SYMBOLISM. You gotta work together, people! Don’t be divided and conquered!

At the climax they’ve got a real good variation on the ol’ “villain is recorded admitting how evil they are” cliche. In this one, Senora Presidenta is giving a live televised speech when guerillas attack her mansion, and she’s too stupid to realize that the camera crew leaves all their equipment on when they flee. Bernhardt ends up fighting Thompson in front of the camera, so the oppressed citizens of this South American country sit in their living rooms and in bars watching two white dudes fight over the future of their country. They stay seated, and at least one dude continues drinking his beer. It’s a pretty good fight, because at one point Bernhardt uses the camera to head butt Thompson.

I wish I could report that this was the great forgotten Sheldon Lettich classic, especially because of the great symbolism in that climactic fight. But honestly this doesn’t deserve to be on the same shelf with LIONHEART and ONLY THE STRONG. The leads are pretty weak, and the more interesting people in the cast like Robert Englund don’t really get to do much. But at least it picks up toward the end. I’ve seen worse.

note: the DVD transfer is 4:3 anyway so if you want to see it and the VHS is cheaper you might as well get that
second note: special thanks to Vlad M. for making me aware of this one

a guy who looks like Steve Guttenberg Brian Thompson Daniel Benhardt DTV Robert Englund Sheldon Lettich
This entry was posted on Tuesday, June 12th, 2012 at 1:13 pm and is filed under Action, Martial Arts, Reviews. You can follow any responses to this entry through the RSS 2.0 feed. You can skip to the end and leave a response. Pinging is currently not allowed.