Anyway I always heard the Larry Clark part was good, and now that I knew Brambilla did one I could review it and say “from the creators of KEN PARK and DEMOLITION MAN.”

So I figured oh well, I’ll just watch the shorts in order, so I clicked on the first one, which was Matthew Barney. The opening text of the DVD says something about how they asked directors to create shorts about their views of sex and pornography. Barney’s answer to that call was to paint a dude’s dick like a caterpillar and open with a 4-minute static closeup of the guy slowly getting a boner. 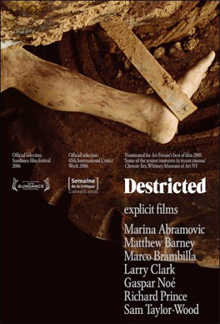 Man, I tried, but I had to start fast-forwarding before that first shot was over, then I saw a bunch of camcorder footage of a construction site, then a more professional shot of a naked dude strapped into some type of drill machine. When I got to the closeup of ejaculation (I think the head of the penis was supposed to look like a mushroom) it gave me this really good idea of skipping to Larry Clark’s segment, “Impaled,” and only watching that.

I’ve had a history of enjoying Clark’s movies while also being creeped out by them. He’s so obsessed with the sexuality of his young characters that it seems sketchy. This works out best in BULLY, his teen true crime tale that’s darkly hilarious in its nightmarish portrait of sexually aggressive, drugged out asshole kids. But even in the outlaw drug addict road movie ANOTHER DAY IN PARADISE and the skateboard comedy WASSUP ROCKERS (both movies I liked) he has uncomfortable closeups of young men’s body hair and shit. He’s a weirdo.

Clark chooses kind of a sensitive pretty boy with hair that I believe would be called “emo.” He talks like Casey Affleck and looks like he must be in some stupid band that young people like that I don’t get. He stays on the couch while a series of women come in and sit next to him to be interviewed. He tries to act casual even though they all take their clothes off for him.

This is the, uh, meat of the film because these actresses talk about their jobs and their lives and try to laugh off or deny the tragedy of it all. And you watch this kid’s face as he tries to stay excited for fucking one of them. One of them looks pretty young but mentions that she started because she needed the money for her two kids, then later mentions that she doesn’t have the kids anymore. Another doesn’t think it’s relevant that she lost her virginity at 12. One laughs uncomfortably when she admits she’s reached “the big 4-oh,” but luckily he’s into older women. At first it’s kind of cute how much she seems excited for the gig, but it quickly gets creepy.

I like when Clark zooms in for a long close-up of the razor blade one girl wears on her necklace. A silent way of saying, “Hmmmmm…”

At the end the kid claims to be happy. He says he enjoyed it, but admits he almost threw up because of the shit on his dick.

Okay, I’m not expecting any of you to run out and see this, but it’s a worthy achievement that adds some credibility to Clark’s style of arthouse perviness.