Required reading: Movie Studios Are Forcing Hollywood to Abandon 35mm Film. But the Consequences of Going Digital Are Vast, and Troubling 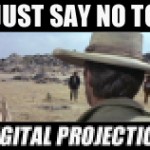 You gotta read this LA Weekly article. It explains in fascinating detail how the conversion to digital projection is yet another area where technology threatens to wipe out an entire chunk of our culture forever in exchange for some convenience.

For old time’s sake I dug up this logo I made back when Seattle’s historic Cinerama theater first converted to digital for ATTACK OF THE CLONES. It looked like shit, but they realized it and switched back to 35 mm. For years we were safe, until the 3D boom left them as the #1 choice only for people who insist on seeing the 2D version of AVATAR. After struggling for a while they changed management and remodelled so they could start playing 3D movies.At first it didn’t seem that bad. The technology has improved since their first digital projector. Most places are digital now, and I’ve gotten used to it. Sometimes, at least if the movie was shot digitally, I think it looks better. But I was horrified when I saw THE GIRL WITH THE DRAGON TATTOO sitting a little closer than I usually would, about the same place I had to sit for some of the LORD OF THE RINGS movies, and it looked pixelated and crappy. I knew a David Fincher movie had to look better than this shit. A friend of mine, sitting back further than I ever sit in that theater, reports giant obvious pixels on HUNGRY GAMES.

It’s a bigger problem at Cinerama because it’s a bigger screen. It’s okay in little multiplexes, but this is different. This has always been the best place in the city to see a movie, it’s where people would line up to see the first showing of a big exciting movie, it’s where those nutbags supposedly camped out for a month to see the Star Wars movie. If a movie was playing at Cinerama it was always your first choice. Now it’s my first choice if the movie is either not released in 3D or shot in native 3D and if I can guarantee gettting there early enough to not have to sit in the first third of the theater where the illusion of movie projection is not as convincing.

But the sometimes-crappiness of digital projection is a side issue I wanted to bring up, it’s not the point of this article. Some of what comes up here is sad, but inevitable. Alot of us have jobs that just can’t exist anymore after a new technology takes over. It sucks but it happens. You gotta roll with it. The part I’m most worried about though is the repertory theaters. This article explains how studios are no longer loaning film prints in order to force theaters to switch to digital. Even if theaters can afford the upgrade and stay in business (which is unlikely in most cases) it will leave us with digital theaters that can only play whichever greatest hits the studio has converted to the DLP projection format. Say goodbye to the art and lifestyle of theater programming and digging up obscurities.

Keep going, the article gets scarier. It explains how preserving digital copies is actually 11 times more expensive than preserving prints, how 20% of the data on TOY STORY actually became corrupted (doesn’t say how they got out of that mess), how close Pixar came to erasing the only copy of TOY STORY 2, how obscure films will inevitably be left behind because of constant format changes and become lost.

I had no idea about this stuff, and I bet you didn’t either. Everyone who loves movies needs to know about this. This is our way of life being bulldozed in order to save in shipping costs. If they’re gonna do it let’s make them do it while looking us in the eye.

digital projection required reading
This entry was posted on Thursday, April 12th, 2012 at 5:05 pm and is filed under Blog Post (short for weblog). You can follow any responses to this entry through the RSS 2.0 feed. You can skip to the end and leave a response. Pinging is currently not allowed.

60 Responses to “Required reading: Movie Studios Are Forcing Hollywood to Abandon 35mm Film. But the Consequences of Going Digital Are Vast, and Troubling”