There’s a new version of THE PHANTOM out on DVD that tries to be BATMAN-BEGINS-realistic instead of old-fashioned-serial-goofy. It uses the same concept of the Walker family and associates passing down the name and methods of The Ghost Who Walks, but in the context of the modern world. You know, computers and internet and shit. The new Phantom can do acrobatics and what not but not because of jungle training. He does it because he’s a parkour dude. I actually thought that was a good way to explain it. I just didn’t like the dad saying, “None of this parkay stuff” and the kid whines “Daaa-aad, it’s called parkour!”

This new Phantom (Ryan Carnes) is a young pretty boy law student, what is commonly referred to as a bag containing douche. He’s not rich like Batman, Iron Man or Green Hornet, but he follows that same currently popular super hero formula of self-absorbed do-nothing finds his purpose through a masked alternative lifestyle. These stories tell us that you will never truly be happy with yourself until you help others. The Fountainhead would hate the Phantom. Actually, The Fountainhead would be a really good nemesis for a future Phantom movie. The Phantom could rescue people from his building before he blows it up. 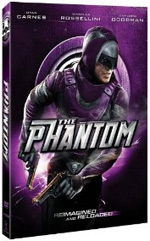 This new Phantom adventure comes about when some menacing suits including Abel Vandermaark (Jean Marchand) show up to tell this youth a few things he doesn’t know, like that his real name is Kit Walker, not Chris Moore, that his real parents were assassinated by an ancient pirate order called the Singh Brotherhood, and that his adopted parents will be in danger if he doesn’t abandon all of his loved ones forever to secretly wear a purple suit and live in a jungle cave. I think he’s thinking more along the lines of passing the bar exam and working his way up in a firm somewhere, so he says no. But he comes home just in time to find his parents murdered and parkour-chase after the culprits. After Vandermaark convinces him he had nothing to do with the murder Kit agrees to leave his old life behind and see what these jungle people can offer him re: avenging parent death.

The biggest problem I had with this movie is that it’s three hours long. That might sound like an overconfident DTV movie but it turns out it’s because it was a mini-series on the Syence Fyction Channel. And from what I understand it’s the first one they’ve ever tried where there’s not a giant sea creature involved. For them this is really branching out, like when Clint did BRIDGES OF MADISON COUNTY. So they hired the creator of that show “Carnivale” to write it with his son, who I’m sure will pass the torch down for many generations and they’ll all pretend to be the same guy who created Carnivale.

The only thing I find more amazing than me getting through the first hour and a half is me actually starting to enjoy it in the last hour and a half. It starts out as a pretty typical TV pilot, with a not particularly cool hero and alot of setup. Yeah yeah yeah, his parents got killed, he has to reach within himself to find his true etc. etc. I think we get it. And before there’s pirate trouble there’s all this business with him going on a parkour run broadcast live over a webcam, it’s all very uncomfortable. You know how Hollywood people, and especially TV people, are real good at seeming like they’re trying way too hard to attract young people? It just has that feeling of some old dipshit who just found out about this internet and he knows that’s what kids want to watch is a TV mini series about a webcam broadcast.

It gets more fun once the kid gets his ass to Bengalla and it starts showing the mechanisms of the Phantom network. He doesn’t have to set it up like the other super-characters I mentioned. His super hero shit has been in place for generations, evolving with technology. They just have to teach him how to use it.

So that’s when it gets kind of cool. He has at his disposal a team of scientists who build him new tools and weapons and can do forensics, an advanced medical facility, high tech training and testing equipment, and also the natives for spiritual guidance. There are two factions within the organization – Vandermaark is a traditionalist who wants to maintain the classic Phantom techniques, Dr. Baboor (Ivan Smith) is an inventor always trying to push the Phantom into using the latest shit.

I was hoping Vandermaark would be a good influence on him, but when they proudly present this kid the Phantom costume he says “I’m not wearing that.” It’s that old live action super hero dilemma, that they think everybody wants to see super heroes but they also think the last thing anybody wants to see is super heroes, so they give him some SWAT team type “realistic” contraption. I never understand this attitude. Okay, so you’re concerned people are gonna laugh at this one: 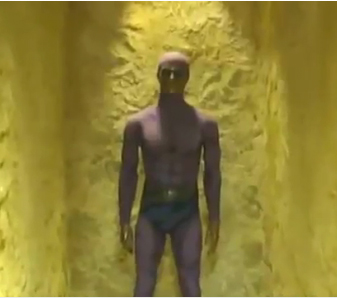 Fair enough. I mean I think you can’t really go wrong with simplicity like that, but obviously alot of people now refuse to buy into the old classics. I get that. They don’t want to be perceived as old fashioned, the main thing the Billy Zane movie wanted to be perceived as.

But then how the fuck do you think nobody’s gonna have a problem with this: 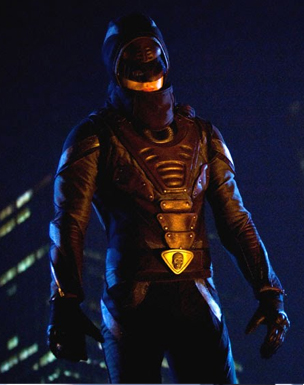 That’s really supposed to be better? That’s where it loses me. And then when they made the cover for the DVD I guess they noticed that it didn’t resemble the Phantom very much, so they made it more noticeably purple and then it looks even more ridiculous.

If you ask me the new one is way sillier looking than the old one and makes this show difficult to take seriously. I mean I feel similar about the Nolan Batmans, but that costume is a little more aesthetically pleasing than this one. And it doesn’t seem logical to me that a parkour guy would think it was okay to put all this shit on. I’m pretty sure those guys are big on wearing comfortable clothes. Since the military has developed lightweight bullet proof materials out of genetically altered spider webs I’m sure the much more advanced scientists over there at Phantom headquarters could come up with something more parkourable than this thing.

But like the Batmans they do make it a little more tolerable by explaining the technology of the suit. It’s not only armor but some kind of strength enhancing powersuit deal. I guess if that’s the only option then it’s a good choice, function over fashion. Yes, I look like M.A.N.T.I.S. in this piece of shit, but at least I can punch a guy real hard.

When the movie gets enjoyable is when he starts using all this shit. Of course he has to go back into the city (the urban jungle, right? kinda deep) and I guess where he differs from other super heroic individuals is he has a whole team keeping an eye on him via satellite and cameras, mapping things for him and sending out help and what not. So he’s kind of a cross between Batman and the CIA. And of course the kid has to sort of come into his own, he has to decide for himself which direction to take the Phantom legacy and therefore prove that he’s worthy of wearing the suit. So that he can, you know, not wear the suit.

I hope since the Phantom is supposed to save the world from piracy that he eventually has to go after CD and DVD bootleggers. It just seems like it would be good for him to get some cases that are less dangerous, you know? I think he could handle that one and wouldn’t have to do as much parkour.

I don’t know man, I was way more into the Billy Zane one, but somehow at the end of this I thought if they do make it a TV show or make another mini-series I’d probly take a look.

mini-series
This entry was posted on Friday, September 24th, 2010 at 12:14 am and is filed under Comic strips/Super heroes, Reviews. You can follow any responses to this entry through the RSS 2.0 feed. You can skip to the end and leave a response. Pinging is currently not allowed.