After I saw MANDRILL I was looking at Marko Zaror’s filmography and realized there was one I hadn’t noticed before, a starring vehicle that he did in Mexico instead of his native Chile. IMDB lists it as a 2009 release, after KILTRO and MIRAGEMAN, but from the looks of it I’m pretty sure he filmed it before those (it seems to have played a Mexican film festival in 2007, and the trailer says “introducing the Latin Dragon Marko Zaror”). It’s credited to his Mandrill Films and Zaror Brothers companies, but directed by one-timer Peter Van Lengen instead of his better known partner Ernesto Diaz Espinoza.

In this one Zaror lives in Mexico (playing Mexican, I believe). He’s introduced sneaking around on a field taking photos of cartel members digging up hidden loot. They spot him so he has to beat all of them up. He cuts open what they were digging up, tastes it (it’s dope), laughs and tosses it away. Not interested.

He’s not a cop or agent, just a freelancer, and also practices kung fu. On the news one day he sees a story about a church where one of those crying Virgin Mary statue type miracles has taken place, and he recognizes it from a photo of his mysterious grandfather, a Shaolin monk who fled to the U.S. but then went down to Mexico because of all the racism. He didn’t know his grandfather and apparently his father didn’t either, but he’s fascinated by him because 1) understand his true heritage or whatever 2) shaolin monks are fuckin awesome, everybody knows that.

So he goes to the church and starts asking about “the chinaman,” which leads him to find his grandfather’s grave and his hidden medallion, which gives him magic powers. (Obviously. Otherwise why would you hide a medallion?) Well, it turns out alot of unsavory individuals were looking for this medallion, including a Chinese gangster and the local thugs that work for him, so this leads to scuffles, kicking, etc. 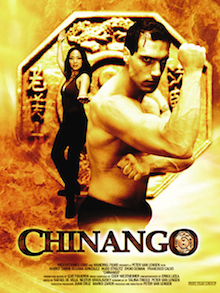 The title CHINANGO of course is mixing the words for a Mexican and a Chinese man. So Zaror is supposed to be a mixed breed, in the tradition of BILLY JACK or BLADE. The title KILTRO also comes from a name for a mixed breed of dog, so this seems to be a Zaror theme.

It’s alot like Zaror’s other movies. He has to uncover the mysteries of a remarkable grandfather (instead of father) whose problems he’s inherited, he has posters in his room showing the idol that influenced him growing up (Bruce Lee), and he’s in love with a beautiful woman he doesn’t really know (Asian, like in KILTRO) although in this one it’s not the obsessive loveskickness that I now think of as his trademark because of KILTRO and MANDRILL.

But this seems like a lower budget than the later movies, like a rough draft of what he would accomplish. It’s a little more amateurish and on a smaller scale, with less locations and mostly smaller fights. It doesn’t have Rocco or anybody as good as him doing the music, and the shitty opening credits had me expecting one of those Mexican straight to video movies that Robert Rodriguez was trying to compete with when he made EL MARIACHI. But it turns out to be better than that, with some nice looking photography and locations at times (mainly the church). And I like alot of the character actor villains, especially the fat guy that has to follow him around and seems kind of annoyed by it.

Most, maybe all of Zaror’s starring vehicles feel a little juvenile in their storylines. They have this kind of little boy fantasy fulfillment element based on the shitty TV shows you watch growing up, this idea that if I knew kung fu the girl would like me or if I found a magic thing I would know kung fu and then the girl would like me or if I knew kung fu or had magic powers I would probly come across a girl getting attacked in an alley and I would rescue her and then maybe she would like me (both KILTRO and MIRAGEMAN play with that last one). It’s weird that Zaror is so into this, because he doesn’t look like a guy who could’ve ever been a weenie or a nerd. But that seems to be the character he’s drawn to so maybe that’s how he sees himself.

Although not as polished as his later fights, Zaror’s style is definitely in place, especially when it comes to his love of doing a back flip and kicking a guy on the chin on the way up. There are several funny badass moments and touches of weird humor that convinces me Zaror has a Badass Auteur type influence on the movies he makes. Let me give away the weirdest one here to give you an idea (skip the next two paragraphs if you don’t want to know).

Toward the end of the movie Zaror has snuck into the bad guy’s lair to come after him. He comes into a room where the already-established Lead Martial Artist Henchman is standing in showboating leg-up-in-the-air-to-show-how-awesome-my-kicks-are pose. His back is turned to the camera. In one hand he’s holding a photograph (of a woman? of himself?) and with the other he appears to be, you know… jerkin it. He doesn’t seem surprised to be interrupted, he just very calmly puts his dick away and turns around to fight.

What does this mean? Is it some cultural thing I don’t understand, was there some context to it that I just missed, or is it an absurd piece of humor? I lean toward the third one. I like to interpret it as the ultimate sign of confidence in his abilities, an extreme way to show off that he’s not nervous about facing our hero. It’s like Bruce Lee eating chips while busting through THE BIG BOSS’s henchmen. He’s just casually beating off to pass the time while waiting for his showdown.

So, obviously this is a recommended movie for anyone interested in the Latin Dragon. Don’t expect the quality of his later ones (which admittedly aren’t perfect either), but as a scrappy first try it’s got alot to enjoy. Even if you don’t dig it you will notice that the famous Mexican actor Hugo Stiglitz is in it, and then you’ll learn that Til Schweiger’s character in INGLOURIOUS BASTERDS was named after a famous Mexican actor. Ah shit, I just gave it away. Still, CHINANGO is pretty fun.

Marko Zaror
This entry was posted on Thursday, March 1st, 2012 at 12:15 am and is filed under Action, Martial Arts, Reviews. You can follow any responses to this entry through the RSS 2.0 feed. You can skip to the end and leave a response. Pinging is currently not allowed.