MANDRILL is Chilean vehicle #3 for martial artist Marko Zaror, and in my opinion his best so far. In KILTRO he played an overgrown man-teen with dyed hair and baggy pants, in MIRAGEMAN he was an emotionally-stunted wannabe super hero who barely talked, so it’s surprising to see how well he fits the more standard super-suave badass role.

MANDRILL plays like a tribute to and commentary on James Bond, blaxploitation, and probly some type of Chilean cinema I never heard of that influenced Zaror and his writer/director pal, Ernesto Diaz Espinoza. Zaror plays Antonio “Mandrill” Espinoza – elite killer, marksman, martial artist, wearer of suits and sunglasses. Like most movie characters his parents were killed in front of him when he was a kid, and he’s still trying to avenge the killer. He can shoot and beat up people who pull guns on him, and he loves to seduce women. He listens to the same Buddy Richard tape every day in his car – that’s right, he has a cassette player in his BMW, but he also has a smart phone, so it’s not a period piece. But the soundtrack is full of Spanish-language disco (including a Julio Iglesias cover of Barry White’s “Love’s Theme”) and the opening credits are over a long shot of him driving. Very ’70s.

(The retro font is I think a little forced, but I’m not the type of guy to let a font ruin a movie for me. I forgive it. I like what they were going for.) 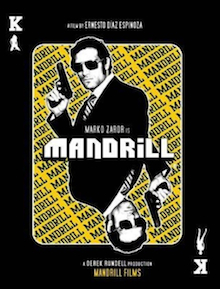 Mandrill has that type of thing where he’s laughably awesome, like Shaft, Blade, Snake Plissken, James Bond. In one scene he seems to overtip a bellboy who tells him about a black tie event, but then yanks the guy’s bow tie off of him. In another scene he sneaks into an elite killer’s swimming pool and starts sweet talking his girl. He’s a total stranger but his kiss is so desirable that she first acknowledges that she’ll be killed for it, then goes for it anyway. Actually he makes moves on two different bad guy’s women in two different bad guy’s pools. Then in the next scene he’ll be dry and wearing a suit and tie. That’s the type of individual we’re dealing with here. A fucking Mandrill.

But once Mandrill is on the trail of “the Cyclops,” the guy that killed his parents, the movie starts to flashback and sort of deconstruct his awesome persona. Turns out he wasn’t born a Mandrill. He grew up obsessed with a Chilean movie character called John Colt – “He’s every woman’s dream… but only one will steal his heart” – because his uncle Chone described his dad as being like John Colt. That’s why he learned to fight and shoot guns, and where he gets his style and even his dance moves. But he still was terrible with women so his uncle taught him “The Technique” that him and dad developed by watching “John Colt movies over and over again until we were as smooth as John Colt.” In one funny scene as Antonio tries to observe his uncle hitting on a woman in a bar we realize Uncle Chone’s wearing a mic so the kid can hear everything. That’s a thorough uncle.

In the present Mandrill tracks the Cyclops to a casino in Lima, Peru. He plans to use his daughter (Celine Reymond) to get to him, but falls in love with her instead. One thing he does that probly John Colt wouldn’t do, he starts crying when he’s spying on her. And again when he’s face to face with the guy he wants to kill. That’s one thing I like about Zaror, he’s secure enough in his masculinity to do alot of crying and being sad in all his movies. Most of his idols probly didn’t do that. He’s creating his own path.

When he’s sneaking around disguised as a janitor he quickly knocks out a bunch of thugs, but then he ends up in a pretty involved scuffle with one guy I didn’t expect to be any different from the others. The guy puts up a good enough fight that he gets a couple dramatic slo-mos as he slams Mandrill and puts him in some kind of leg choke type hold. Mandrill has all these big fights where he’s doing spinning kicks and flipping and putting people in armbars and chokeholds and the whole time he’s wearing a suit or a vest and a tie. After one long fight with three guys he takes a second to adjust his tie and check his hair, then moves on to the next challenge.

There’s a crazy thing that happened while watching this movie, but only in my mind, because I guess I misinterpreted what was going on. As Mandrill is learning about his enemy’s daughter, the girl he’s falling for, we hear that her mother was killed, that there are no photos of her father, we see that she has a locket with a photo of her mother just like the one Mandrill has with a photo of his father. He doesn’t get to see the picture, and keeps asking about the mysterious locket. And also they learn that both of their mothers had “Despidete con un beso” by Buddy Richard as their favorite song. I mean, that’s a pretty big coincidence, right?

I was convinced (HUGE TURNS-OUT-NOT-TO-BE-A-SPOILER) this meant they were brother and sister. I thought this was clear. And then there are all these scenes where they’re almost gonna screw, and it’s suspenseful… are they gonna figure it out in time?

Nope. They screw. But then they never turn out to be brother and sister. I guess all that was just to show how much they had in common, not that they were related. I was taking the clues wrong. Don’t worry about it. It doesn’t go that way, but it does build to a different type of soap opera moment involving a fast draw contest, an eyepatch, a whole lot of tears, lots of melodrama, and I actually found myself emotionally invested in it. 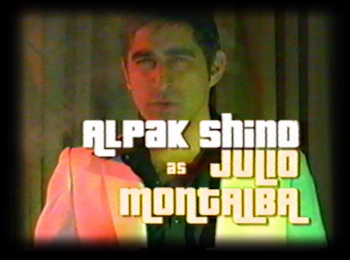 Usually a movie like this that makes reference to the beloved pop culture of the filmatist’s childhood is all about happy nostalgia. But for Mandrill, everything he learned from John Colt turns out to be bullshit. At first his relationship with the girl mirrors what happened in the John Colt trailer we saw. They even do the same dance together. But unlike John Colt, when Mandrill gets his revenge it fucks his whole life up. It makes him sad and turns his girl into a James Bond super villain that needs to get revenge on him. Mandrill’s been sold a bill of goods by John Colt. Either that or he applied The Technique wrong.

This is my favorite of the Zaror/Espinoza movies because it’s the most tonally consistent, but still with a pleasantly odd mix of flavors. It’s also the best looking, with some very nice cinematography of beautiful people in expensive clothes in scenic locations. When they’re dancing and having a night on the town the girl seems to genuinely be into him, and that goes a long way. I like the whole vibe of Bond meets Shaft meets Julio Iglesias. Previous Zaror characters were more unique inventions, but there is something to be said for just being straight up cool like Mandrill. It’s obvious, but it’s great. I like watching him.

I watched the screener of this one twice, which is not something I usually do. It’s just how I like it – pretty ridiculous but not ironic or a parody. It starts out as an absurd tribute to its ’70s influences, knowingly humorous but not a comedy. When it gets into the John Colt movies you think for a second okay, now it’s making fun of what I like. But it quickly turns into unashamed melodrama. It’s like the scene where she’s not impressed by his formulaic sweet talk, so he takes off his tie, gets up and does a bunch of SATURDAY NIGHT FEVER type moves for her. She laughs, but she obviously loves it. That’s how I feel about the movie.

The James Bond inspired score by Espinoza’s regular composer Rocco is cool, but the movie ends appropriately with the Buddy Richard song – the crooning and yearning and disco orchestration. It seems to be saying I am in love, I am overwhelmed with emotion, I will die violently for this girl if I have to. I feel it deep, I don’t care if you laugh at me. And no I will not turn down the volume on my Julio Iglesias tape.

Celine Reymond Ernesto Diaz Espinoza hitman Marko Zaror revenge
This entry was posted on Tuesday, February 28th, 2012 at 1:44 am and is filed under Action, Martial Arts, Reviews. You can follow any responses to this entry through the RSS 2.0 feed. You can skip to the end and leave a response. Pinging is currently not allowed.