This is gonna be pretty short. It’s easy to think of Nic Cage movies in binary terms, like he does good movies and he does terrible ones. And you just hope whichever one it is he’s uncaged enough to make it interesting or funny. But just like there is grey area and overlap between evil Castor Troy and heroic Sean Archer there are various shades of good and bad Cage. For example I thought he was great in KICK ASS but the rest of the movie wasn’t necessarily on the same level. I thought NEXT was a funny-bad classic despite his restrained performance. I thought him being normal in DRIVE ANGRY seriously held the movie back. Even THE WICKER MAN, one of his all time top 5 mega-acting performances, has some pretty boring stretches between classroom rants and bee attacks. (I love it though.)

TRESPASS is another one in the middle column, which is the worst column to be in. He’s not boring – he plays it as a nerd with ugly glasses, he does a stutter, he gets into it. But he doesn’t do anything crazy enough that I remember to tell you about it. The movie itself is not genuinely good, but not memorably trashy or weird. Directed by Joel Schumacher (BATMAN AND ROBIN), Cage (8MM) plays some family-neglecting asshole, driving around talking on his cell phone trying to broker a diamond sale, acting like he’s King Shit, the King of Shitropia. He comes home to his lonely wife, played by Nicole Kidman (BATMAN FOREVER), shortly before their angsty teen daughter (Liana Liberato – born 2 months after BATMAN FOREVER came out) sneaks out to go to a party and before a group of masked home invaders storm their house and try to get him to open his safe.

Yeah, basically it’s PANIC ROOM, and it’s kinda funny to compare Schumacher’s idea of PANIC ROOM to David Fincher’s. In Fincher’s the daughter could look like a boy and ride a scooter, in Schumacher’s she’s a sassy party girl interchangeable with six thousand other characters in modern teen and horror movies. Both movies get respectable, somewhat under-the-radar actors under the ski masks: Fincher had Forest Whitaker and Dwight Yoakum, Schumacher has Ben Mendelsohn from ANIMAL KINGDOM and Dash Mihok from Felicity. Both movies have kind of a teen heartthrob type that played an antagonist in a fighting movie – Jared Leto (My So Called Life, FIGHT CLUB) for Fincher, Cam Gigandet (The O.C., NEVER BACK DOWN) for Schumacher. Surprisingly it’s Fincher’s not Shumacher’s, that has a white guy with corn rows. 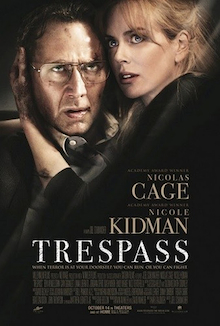 It’s mostly what you expect: home invaders pushing the couple around, roughing them up, the backstory and identity of the thieves slowly revealed through dialogue and flashbacks, the couple being shamed and tested by accusations and information that come out during the whole ordeal. Wait a minute, the wife knows Gigandet? And the husband might be lying about how much money he has? Deep dark secrets, all that shit.

Before everything went down the daughter implied that there was some trouble in their marriage, and they seemed in denial about it. Now, when they need each other most, they’re being pushed apart. etc.

Meanwhile Cage keeps refusing to open the safe and coming up with schemes (including offering to find a buyer for the diamonds they plan to steal from him) and the thieves come up with new ways to threaten him. And of course there’s the whole bit where one thief is really out of control and another thief is more sympathetic and trying to keep things under control, and there’s  a girl thief who has no restraint at all and starts putting on the wife’s dresses and then flips out and panics at the drop of a dime.

I thought the twist at the end was the best part of the movie, so I’ll go ahead and spoil it. SPOILER is what I’m saying. Instead of having some scandalous revelation the twist is that there isn’t anything scandalous. The implied affair between Kidman and Gigandet never happened – he had a thing for her, she rejected him, but the flashbacks were shown to us misleadingly out of context. Cage hiding from his wife that he’d blown all their money? Never happened either. He just convinced the thieves of that to hide the fact that he’d been squirreling away money for his family’s protection. And after all this the family find themselves together on the floor, hugging, even Little Miss I-hate-you-Mom-I’m-going-to-the-party. This nightmare has shown them that things aren’t actually that bad and that they really do love each other. It’s sure not deep, but it’s kinda sweet as far as these things go.

Not only that, but TRESPASS is not very faithful to the original. The whole situation is totally different. It takes out the racial and class tension and also switches it so that the protagonists are the people getting looted instead of the other way around. I guess Cage would be Ice Cube, Kidman would be Ice-T, Gigandet is Bill Paxton and Mihok must be William Sadler. But Cage and Kidman don’t do a song together over the credits so what the hell’s the point?

Cam Gigandet Joel Schumacher Nic Cage Nicole Kidman
This entry was posted on Tuesday, November 8th, 2011 at 2:47 am and is filed under Reviews, Thriller. You can follow any responses to this entry through the RSS 2.0 feed. You can skip to the end and leave a response. Pinging is currently not allowed.