Q (aka Q – THE WINGED SERPENT) is writer/director Larry Cohen’s version of a giant monster movie, about a small time New York City getaway driver played by Cohen’s DeNiro, Michael Moriarty. He’s recently out of the joint, failing to get a job as a bar pianist, and gets screwed over by some mobsters during a failed diamond heist. He runs straight from the scene of the crime to a (closed, it turns out) law office high up in the Chrysler building, where he ends up having to hide from a security guard in a not-open-to-the-public area beneath the needle. There he finds a dead body and a nest with a giant egg. Huh.

The giant egg, as I’m sure one or two of you’ve figured out, belongs to the giant monster, the titular winged serpent. He’s apparently the resurrected Aztec God Quetzalcoatl (thank you Text Edit for correcting my spelling on that, that is an impressive range of knowledge you get there), but like Quincy Jones you can just call him Q. Or don’t call him anything, he’s not gonna notice, he just likes flying around eating rooftop sunbathers or skyscraper construction workers or tasty snacks like that. Being a God, he’s smart enough to do it in the early evening when the sun is low so when people look up they get blinded and miss him there. 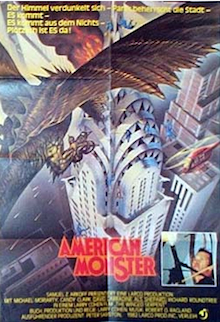 Q may or may not be connected to a couple murders that have happened recently that seem to be modeled after Aztec human sacrifice rituals. It’s hard to say. But whatever’s up the cops oughta figure it out, ’cause they have not one, not one and a half, but two full-fledged marquee names on the case: David Carradine and Richard Roundtree. But like I said it’s more about Moriarty. He’s the less obvious hero: he’s an ex-cop but not a tough one, he’s not only a coward but he cries about being a coward, he apparently has a drinking problem and his hit his wife before. You still kinda root for him and then he turns into a dick at the end. It’s like he senses he’s becoming the hero of the movie, it gets to his head and then he fucks up and you’re kinda more on the side of the cops finally. Or at least I was. But I got a soft spot for him.

This was before he’d worked with Cohen in THE STUFF and ISLAND OF THE ALIVE. He’s even better in those, but it’s so cool that he does these b-movies and seems to pour himself into them like some of the other guys of his generation did into New York crime dramas or something. He makes this thing into an actor’s showcase, running the emotional gamut from the desperation of the two-time loser to the shame of cowardice to the cocky strut of a guy who thinks he’s forced New York City to pay him a million dollars to tell them where the monster lives. It’s kinda funny because there’s way more of a character evolution than you expect in a movie about this, but also it’s clunky at times ’cause he has to deliver dialogue (sometimes monologues) that come right out and tell you about his inner torment or how fear has held him back all his life or what have you.

Carradine doesn’t have to do any of that, but there’s a laughable part after he talks about the giant egg in breakfast terms, then you hear an off-screen officer comment that he only jokes around when he’s afraid. I can’t decide if that’s a weakness or a strength, that Cohen can’t just let it be a good one-liner and feels he has to try to turn it into a deep insight into the character. Maybe it’s both.

But Cohen is definitely an underrated director, and a great chronicler of New York City locations. He finds the best run-down buildings and graffiti to put in the background, he stages scenes with what’s gotta be real people walking around in the background, groups of kids hanging out behind the pay phone or whatever. I can’t fucking believe it but he really filmed inside the actual needle of the Chrysler building. It seemed like a really good set and then I realized that behind Moriarty you can see an opening that looks down on NYC. Then I read that yes, he filmed inside the real place, for a low budget movie produced by Samuel Z. Arkoff. Amazing.

That’s the best part is the way he shows New York from above, the Aztec God’s eye view. In the early scenes you don’t really see my man Q, but you see what is apparently what He sees, helicopter shots floating around above the rooftops watching people. They’re beautiful, fluid shots and a really novel version of the typical monster-or-slasher-watching-from-the-bushes type of horror movie technique. Then when Cohen gets back to the ground he uses smooth handheld shots that mimic the movement of the helicopter shots and keep you on edge, subconsciously still thinking about this winged serpent being above about to bite somebody’s head off.

And he has a brilliant way of depicting the aftermath of the attacks – montages of New Yorkers looking to the sky in disgust as their day is suddenly interrupted by blood dripping on them from above. It’s like being shit on by a bird except upsetting in a whole different way. And some people find bloody limbs falling to the pavement. They look up and see the sun and don’t know what the fuck is going on.

It’s only when it actually starts showing Q that the movie gets goofy, because it’s done with poor-man’s-Ray-Harryhausen stop motion. And I love that shit, it’s charming, but it doesn’t really mesh with the down-and-dirty New York indie feel of the rest of it. It’s like putting shots from KING KONG into BLACK CAESAR. That’s not to say I don’t dig it, but just that it holds me back from taking this more seriously as a horror movie. It’s great but the parts you laugh at most are the parts that you’d want to be scary. There are definitely cool-looking shots, but the love I have for the shot where a Mr. Bill-esque clay Richard Roundtree (spoiler) gets thrown to his death is not in my opinion the reaction that the filmatists intended.

But it doesn’t really matter. The magic of Cohen’s best movies is a kind of combination of tightness and looseness. He’s an endless well of high concept gimmicks, and he writes screenplays with solid structures. But since he’s working on these low budgets there’s always some sort of on-the-fly accidents and improvisations that get in there and add flavor. Or there’s just little bits of flair to the characters that give the movie personality, like the girl at the swimming pool who makes a dude watch her do push-ups, or the construction worker that steal a guy’s sandwich not realizing that he has just been eaten. One  part I love in this movie, I couldn’t really explain why, is the undercover cop disguised as a mime. Not so much the mime makeup, but the awesome AMADEUS promo t-shirt he’s wearing.

As is my tradition I listened to part of but not all of the commentary on the DVD (Bill MANIAC Lustig talking to Cohen about the movie). They point out how you could never do helicopter shots like that post 9-11 – another reason to add real low on the long list of reasons to hate those asshole terrorists. Cohen has some funny comments about how what was then considered bad camerawork now looks really high class because it’s so clear and planned out compared to the standard fakumentary style of today. He also tells a story about how Bruce Willis almost could’ve played the Carradine role.

Glad I finally saw this one. I’m not sure I’m converting to the Q religion yet because I’m not into skinning people, but I’m trying to have an open mind and I’m glad to know a little bit more about their culture. If they want to build a temple next to the Chrysler building I think I’m okay with it.

David Carradine giant monster Larry Cohen Michael Moriarty Richard Roundtree
This entry was posted on Monday, October 31st, 2011 at 12:25 pm and is filed under Horror, Reviews. You can follow any responses to this entry through the RSS 2.0 feed. You can skip to the end and leave a response. Pinging is currently not allowed.