Raiders of the Lost Ark: The Adaptation 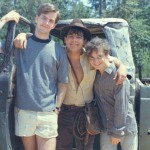 If you’re on the internet (and I’m betting you are), maybe you heard legends about it. Or if you know how to read, maybe you saw the article in Vanity Fair a while back. The story is these kids who, from ages 11 to 17, took upon themselves the monumental task of remaking that movie Raiders of the Lost Ark, which was popular at the time.

Their movie has all the same dialogue, and they pretty much faithfully re-created the whole god damn thing, with the one exception being the scene where the big bald guy gets chopped up in the propellor blade, because they decided it was too dangerous. They’re just kids, man, cut them some fucking slack. But they have everything else: jungles, caves, deserts, the giant boulder, real live snakes, a teenage Indiana dragged from a truck. And most of this was filmed in their basement, garage or backyard. A few times they had to be clever to be able to pull it off, so one plane chase was changed to a boat chase, and instead of a traitorous Nazi monkey on his shoulder, he carries a sieg-heiling weiner dog. But as the years went on and they got more on tape, they convinced more and more people they weren’t fucking around and they were able to shoot on a real boat and submarine. 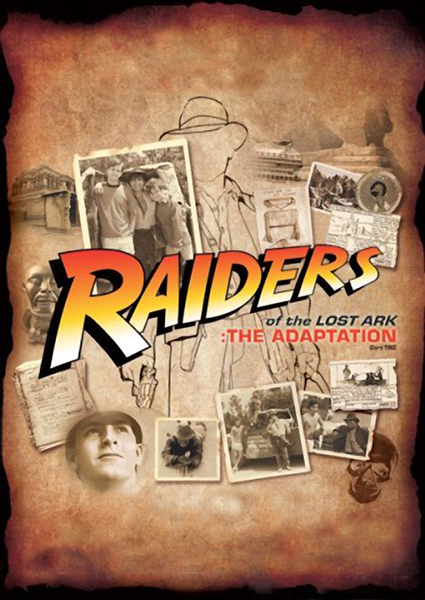 I was lucky enough to see this movie at a rare public screening last month (with the guy who played Indiana Jones in attendance) and I gotta say I was pretty impressed. It looks like shit of course, all shot on betamax cameras and dubbed onto other tapes in the editing process. But here is this movie that we all know, the steven spielberg movie, and we are reliving the whole thing as a no budget camcorder epic with kids playing adults. It’s kind of like that weird deja vu feeling you get watching Gus Van Sant’s shot-for-shot remake of Psycho, except way weirder. Because you know they weren’t conscious of anything, they weren’t trying to say anything or get a reaction out of anyone, they just love Indiana Jones and they wanted to remake the movie. Because that’s the type of shit that kids want to do. Either go on adventures, build a spaceship, feel up Daisy Duke from the Dukes of Hazzard, or remake Raiders of the Lost Ark. All of these are unachievable dreams for most kids, but this is the one time, the one group of kids that actually pulled one off.

Throughout the movie, the kids change ages and sizes. They go from pre-teen to teen and back. Their hair grows long and gets short again within one love scene. Their voices change. These kids were obsessive about the movie. According to the article they studied the comic book, made a tape recording of the movie (this was before the age of home video), made a script and painstakingly storyboarded every shot of the movie. So they didn’t just do the fun parts, they did the boring parts too. The long scenes of dialogue at the college, where Professor Indiana Jones talks to a bunch of dudes about archaeology or whatever it is, I don’t know, I don’t pay attention to that shit. Well in The Adaptation these kids did those scenes, word for word, boring minute for boring minute, but they got kids saying the lines. This 9 year old kid wearing a tie and horn rimmed glasses, his hair painted grey – I don’t know man, that shit cracks me up.

But they do the fun parts too. They got the boulder. They got kids getting lit on fire. They got the bar burning down by setting the kid’s basement on fire! You see this shit and you start getting excited thinking holy shit, how did they do that, and oh man, how are they gonna do the guy getting chopped up in the propellor? (Uh, sorry, not at all.) Or everybody melting at the end? (They actually made dummies and melted them!)

Now, I am not the world’s biggest fan of Steven Spielberg, or of Raiders of the Lost Ark, or home made videos, or obsessive nerdy fan films. Although I do kind of like the first two on the list, and the third one if you are talking only about porn. But this movie is amazing because it exists. If this was a tv show or movie (and they are trying to make a movie about it, with a script by Dan Clowes of Ghost World fame) you would never believe that kids (or adults, for that matter) would have the resources, or the energy, or the attention span to even finish half of this fucking thing. And these kids did the whole thing.

(You know I was thinking, it’s lucky that it was Raiders of the Lost Ark that they were obsessed with, because it turned out to be pretty timeless. Everybody’s seen this movie, everybody remembers this movie and most people like it. So it’s still relevant. Plus, it was a movie good and not corny enough that they could still be into it when they were 17. I mean what if it was Mac and Me or something? Or Romancing the Stone? They would never have stuck with it for so long, and if they did you couldn’t show that shit now. Nobody would watch it. So they picked their subject well.)

But this is not just some funny fan video, this is actually very inspiring. Because you think about how much shit these kids got. How many times in those 7 years do you think they had to explain to somebody, “Yeah, we’re doing an exact remake of Raiders of the Lost Ark.” I mean at that age it’s hard enough to explain why you have a pony tail or got your ear pierced or some shit like that. They gotta explain why they’ve spent 7 years of their lives dressing up in hats and building paper mache caves and memorizing one god damn archaeology movie. How are you ever gonna achieve your life long goal of getting a handjob if that’s your whole life? This is an important question for a young man growing up.

Now, I’m not trying to encourage people to go out there and do star trek movies or some shit like that (see Trekkies for more information). But sometimes you get an idea, and it’s such a stupid idea that you know you should do it. You know that most people won’t understand it, they might even make fun of you, but it is something you have to do. And if you have the nerves of a samurai or of these kids, you will do it, even if it takes seven years.

I mean there are things I don’t understand. I don’t understand those dudes that waited four months in a parking lot to see the last Star Wars movie. (And I have to take points away because they tried to call it an art project and especially because they didn’t stay there after the corny human interest interview opportunities dried up, they just left a tent there and pretended they were inside). But those guys had an impossible idea and they sort of did it.

Sometimes I get those kind of ideas. I mean not as ambitious as The Adaptation, but sometimes you get an idea that makes you laugh and it’s so stupid and would take so much effort and would maybe only amuse you. But that means you should do it! I got an idea for a book a while back, a book that would require watching and analyzing alot of bad movies, in chronological order. I’ve invested alot of time into the book and sometimes I feel good about how it’s going and sometimes I don’t. I go through phases where I work on it obsessively and then end up taking a long hiatus and then start to wonder if it’s good enough that anybody will ever even want to read it. And then I watched this adaptation here and I thought shit, if these kids can finish this movie then I can definitely finish my stupid book.

And you can too. Go out there everybody, reach for your dreams, strive for excellence, and all that kind of crap. GO FOR IT!

This entry was posted on Tuesday, January 1st, 2002 at 6:55 am and is filed under Action, Reviews. You can follow any responses to this entry through the RSS 2.0 feed. You can skip to the end and leave a response. Pinging is currently not allowed.

4 Responses to “Raiders of the Lost Ark: The Adaptation”