The guy isn’t super-cool, in fact he kind of looks like David Paymer. He doesn’t seem like a phony to me, though. Just a regular looking guy who happens to be a hitman. Not a movie star. 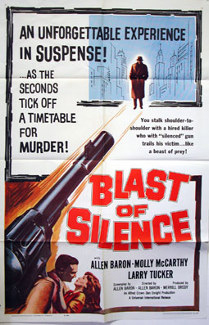 The narration is really unique. It puts you in this guy’s shoes, explaining his plan and his thoughts and pays particular attention to the sweatiness of his hands. But strangely it’s not the hitman’s voice. It’s an unknown narrator, and he keeps saying “you.” You arrive in town. You have sweaty hands. Like this story is about you. About me. Or whoever’s watching it.

When the guy’s in Harlem the narrator says, “You hate them, and they hate you.” I was like what? No! That’s not true! Speak for yourself, narrator. Don’t involve me in your hangups.

He/you run into some dude from your past, when you grew up in an orphanage. (remember that?) At first it’s a problem, you’re worried he’s gonna get in your way. But it’s Christmas Eve and you got time to kill and he pressures you into going to this party and there’s this girl you used to like and you start letting personal distract you from professional.

There’s a gun dealer in the movie played by Larry Tucker, the guy who wrote I LOVE YOU, ALICE B. TOKLAS. He’s a fat guy with a beard who talks in a gentle, friendly voice – friendly to the point of creepy. I can’t remember seeing a guy quite like this in a crime movie before, but he reminds me of a character that would be in one Parker book as a fence or a finger (and most likely not survive to be in another). In fact the whole movie has the feel of some lost pulp novel Hardcase Crime or somebody might dig up. The narration really makes it like a novel and somehow, for me anyway, never seemed like too much. Even though it was an awful lot. I wouldn’t want that much narration in a modern movie, but in something like this it works. The visuals do the movie business and the words do what books do, putting you inside the guy’s mind.

It’s funny, pulp was supposed to be just some crap that hard-up writers could type up quick and use to pay their rent. But some of them turned out real good anyway, and this style of crime story formula is still appealing and hard to imitate in the modern day without seeming phony, like a musician today trying to pull off a zoot suit. BLAST OF SILENCE really is the cinematistic equivalent of one of those books. Solid, but not revolutionary. Of its time, but not out-of-date. It seems like there ought be a thousand simple, low budget independent crime movies like this, but I don’t know of any other ones from this era. The other guys with the cameras and black and white film were busy with carnivals of souls and nights of the living dead. It’s kind of an eye-opener to see that those weren’t the only guys doing it well, just the only ones anybody found out about.

Apparently Waldo Salt, blacklisted writer who later worked on SERPICO and COMING HOME, wrote the narration. But the writer/director is named Allen Baron, and he also plays you in the movie. So you are him, and I think you did a good job.

Allen Baron Christmas Christmas crime Criterion film noir hitman Waldo Salt
This entry was posted on Tuesday, December 21st, 2010 at 11:17 pm and is filed under Crime, Reviews. You can follow any responses to this entry through the RSS 2.0 feed. You can skip to the end and leave a response. Pinging is currently not allowed.

20 Responses to “Blast of Silence”