nah, that’s not true, it’s not a remake. That would be weird though, especially since Clooney knows Soderbergh pretty good. But I do think THE AMERICAN joins THE LIMEY in a modern genre that I think of as arthouse badass. These are movies that are too quiet and leisurely paced to show to a bunch of teens in a multiplex, but also got motherfuckers getting shot or punched. THE AMERICAN is much more basic and straightforward than THE LIMEY, LIMITS OF CONTROL or GHOST DOG, and admittedly less original. But there’s something powerful about its simplicity. Like a bullet. 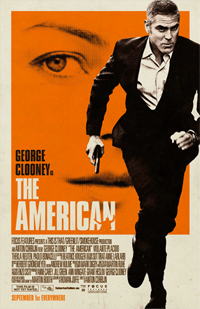 The movie starts with Clooney romancing some beautiful gal in a picturesque snowbound cottage somewhere in Sweden. Ah, shit, I can’t even get into this without a big spoiler, so here goes, no turning back now. He sees suspicious footprints just before bullets start popping off and next thing you know he’s shot his girl in the back of the head. It’s kind of a rash decision because he must think she set him up, at least in that moment, but I think he immediately changes his mind. Fellas, let this be a lesson to you. Think these things through before taking drastic action.

He calls his boss, who sends him to do a job in Italy. You might assume he’s a hitman, as some of the reviews say, but as far as we see in the movie he’s just the guy who provides the weapons, builds them, customizes them. THE MACHINIST was already taken so he’s THE AMERICAN because alot of guns are manufactured in America.

So the movie takes place in this little village as he tries to figure out what the hell to do. Everything he does tends to remind us – and that means it reminds him – about him killing that woman, and about the people trying to kill him. My favorite scene is when he meets his client, who turns out to be a woman. She tests out the weapon with impressive speed and thoroughness, then starts bossing him around – stand over here, shoot over there, I’ll put this target here. It’s a “just how badass is she?” combined with heavy suspense. You’re seeing how capable and fearless she is, and you’re also thinking oh god, is he gonna shoot her? Is she gonna shoot him? The overall uneventfulness of the movie really creates some thick tension.

Their meeting is disguised as a picnic, with the gun in a false compartment beneath a basket full of food. He’s good at building those too. In fact, he makes a briefcase with a layer of false clutter and throws that in free with the gun. If he ever gets out of the game maybe he could build fake bookshelves to hide people’s bat caves and sex dungeons and stuff.

But back to the picnic. It’s kind of like a double meaning because it’s a front for an arms deal but it also puts him in this romantic type situation with this gal. There’s a shot of her from behind where the light shines through her skirt, showing you the space between her legs. If you’re a straight male you may find your brain saying, “Oh yeah! Sex!” which means that’s what George is thinking too, in my opinion. And the same exact thing happens when he brings a beautiful prostitute/girlfriend to the same spot for an actual romantic picnic. These women start to blur together – the dead one, the hitwoman, the prostitute. They look kind of similar, they scare him kind of similar. Are they trying to kill him? Is he gonna kill them? Should he kill them? He’s not sure if he’s being too paranoid or not paranoid enough, and neither are we.

Anyway, my point is it should be called THE PICNICKER.

I’m convinced Clooney filmed most of this on his property with his actual girlfriends. I don’t know how much of a star he is in Italy, maybe they just call him “The American” in real life. There’s a tribute to the Italy-America cinematic nexus when he goes into a little cafe playing ONCE UPON A TIME IN THE WEST on a screen, and one of the more tense climactic scenes seems like kind of an homage to that famous showdown, with a bus coming in instead of a train.

I can’t call this an action movie, but the shit does go down a couple times, and all the character drama foreplay makes it more satisfying. This is what I was hoping for from LIMITS OF CONTROL, actually. If it was the exact same movie but it built to a couple exciting bits like this does I would’ve loved that movie instead of just kind of liking it intellectually.

About the only iffy part is a little bit involving a butterfly. The main problem with it is that I think Billy Connolly had a butterfly tattoo and butterfly encounter in one of the BOONDOCK SAINTS movies, and the last thing anybody needs to do is give that director an excuse for his head to get any bigger, thinking George Clooney copied him. So be more careful with that in the future, Anton Corbijn.

In THE AMERICAN 2 I hope they cover what happened to his shoes after he took them off to sneak up on that one guy. He just left them there, there’s probly a good story there man, I didn’t get a good look at them but I bet this guy wears expensive shoes.

Anton Corbijn arthouse badass George Clooney is...
This entry was posted on Tuesday, September 7th, 2010 at 1:20 am and is filed under Crime, Drama, Reviews. You can follow any responses to this entry through the RSS 2.0 feed. You can skip to the end and leave a response. Pinging is currently not allowed.

69 Responses to “The American”