STILL BILL is a sweet, intimate reunion with Bill Withers, the great singer and songwriter known for songs like “Ain’t No Sunshine,” “Lean On Me” and “Just the Two of Us.” Withers has a great voice soaked in emotion, but what I love most about his music is his honest and down to earth lyrics that cover topics dear to his heart that aren’t usually covered by other singers. Take for example “Grandma’s Hands,” about his love and gratitude for everything his grandma did for him and others when he was growing up, and ultimately how much he misses her. Or “I Can’t Write Left Handed,” about a wounded war veteran. He had more on his mind than “baby I love you” type of business.

But part of the mystery of Bill Withers is his short career. He started in his 30s while building airplane toilets in a factory. Then after several years of great success he retired, and is rarely heard from these days. To be honest I thought he was dead until I heard an interview he did to promote this documentary last summer. I remember I was real sad about Michael Jackson dying but I thought shit, at least Bill Withers is alive again.

Somehow these filmatists got him to agree to an interview. Unlike Sly Stone, Gil Scott Heron or D’Angelo his disappearance doesn’t seem drug related. He just got folded into a major label when his independent one went under, and the type of corporate meddling that comes with that bothered him, so he quit. 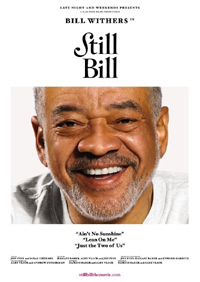 In STILL BILL (taken from the name of his second album, by the way, don’t take it as some awkward KILL BILL reference) we catch up with Bill as a self-deprecating old man who says most people don’t recognize him because they never heard of him. (Maybe he should tell them he’s the guy who wrote the song that DMX covered in EXIT WOUNDS.) They do know him when he visits his home town in West Virginia, though. His childhood friend, from the only other black family in town at the time, is now the mayor. They talk about racism not being as bad for them as in many southern towns, but then when they go to find his family’s grave sites we see that the black cemetery is a broken down shambles covered in weeds, right next to a normal, well-maintained cemetery for the white people.

During that scene I noticed Bill stammer a little, and I wondered about it. Soon enough you learn that he had a really hard time with stuttering when he was growing up, and it was a major obstacle that nobody thought he’d ever overcome. He goes and visits a class for kids who stutter. They’ve been taught all about his music, he gives them some inspiration and they bring tears to his eyes.

Of course you wonder if he ever sings anymore. He has a room full of recording equipment but he claims not to know how to use it. Says he had planned to record some songs but only got around to tinkering. Later he’s talking with a couple of his friends, one of them being his neighbor Jim Brown (yes, the Jim Brown). Jim is talking about something he recently realized about his relationship with his father. This inspires Bill to dig out a recording of one of those songs he “tinkered” with. It was made years ago, but long after his last album, and it’s about pretty much what Jim was just talking about there. And it blows Jim’s mind that these things that he’s starting to understand as he gets older are things that Bill Withers already wrote unreleased songs about. Who knows how many songs full of wisdom he has squirrelled away somewhere? Jim Brown’ll just have to keep having these deep talks with him to bring them to the surface.

Alot goes on during the documentary, including a tribute concert to Bill and a decision to record again. You can see him getting the itch while talking about it. Not for fame or success, just for creating music. But to me the best part of the movie is his relationship with his daughter, who’s a singer. She tells a story about the first time she sang for him, and he gave her tough criticism, but she just needed him to be her dad and tell her he was proud. It’s the first chink in the Bill Wither sensitive guy armor.

Later in the movie Bill has her come in to his home studio so he can help her record her songs. We know that she’s terrified of his response. She plays keyboard and sings her heart out, and she’s good. Not taking from him at all, she’s doing her own thing. Is he going to like it? Will he even pretend to, or will he give her the James Earl Jones in BEST OF THE BEST tough coach routine? (Or the cruel tutelage of Pai Mei?)

He’s got his back to her, tinkering with the levels on the computer. When the song ends she hunches over with a nervous smile and hesitates to turn and look at him. Finally, he turns around, and for the first time we see that tears are streaming down his face. He fucking loved it, no faking. When he tries to say something he has a hard time. So articulate about feelings in his lyrics, now reduced to “I mean… you know what I mean.”

That moment alone makes this a great movie. That’s what you watch a documentary for, and what you listen to Bill Withers for: those little unplanned emotional life moments that capture some essential human truth. Also, the bass lines are pretty catchy.

I don’t think STILL BILL has been distributed widely, but if you’re interested you can get information, DVD or download from the official websight.

And here’s the trailer:

Bill Withers Jim Brown
This entry was posted on Tuesday, August 17th, 2010 at 12:30 pm and is filed under Documentary, Music, Reviews. You can follow any responses to this entry through the RSS 2.0 feed. You can skip to the end and leave a response. Pinging is currently not allowed.