If you’re reading this in the future maybe every movie ever made is available for instant download, but in my day you had to be patient. You don’t know how long I’ve been waiting to see this thing. The closest I came before now was an old movie magazine I bought at an antique mall because it had Barbarella on the cover (wait a minute, is Roger Vadim the French Ted Turner?) So I bought it for the Barbarella, because a man has needs, but it turned out there was also an “article” – really just a plot summary – about THE SPLIT. I’d been meaning to read it and write a book-to-movie-summary comparison until they get off their ass and release it. But now thanks to French Ted Turner I don’t have to stoop to that. 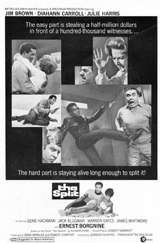 Jim Brown plays McClane, a man of unspecified ill-repute who returns to his girl Ellie (Diahann Carroll) who’s pissed at him for leaving her and tries not to take him back. Meanwhile an old friend shows him an idea for a job- stealing all the gate and concessions money from a football stadium. He recruits a team and pulls off the job, but makes the mistake of leaving the whole score alone with Ellie before they can split it up. Next thing you know Ellie’s dead, the money’s gone, and everybody thinks McClane betrayed them. And he wants to get back his share.

For some reason I assumed this would be a weak one and not at all like the book. Actually it’s solid and although it’s alot different from the book it’s about as close as any of the other Parker movies. What surprised me most was the cast. His team is made up of a fighter (Ernest Borgnine), a driver (Jack Klugman), a safecracker (Warren Oates) and an assassin (Donald Sutherland). They also run into trouble with a pervert landlord (James Whitmore) and a police detective (Gene Hackman). Plus, the music is by Quincy Jones. So how the hell is this not on video?

One idea I really liked is how McClane picks his crew by testing them without their knowledge. My favorite scene is when he shows up in Borgnine’s office and just starts punching him. I never seen Borgnine look so tough, like an old school wrestling or boxing trainer. McClane takes some blows, gets a flying kick in, destroys some furniture. When he’s convinced this guy will do he just exits through the window, leaving Borgnine on the ground asking “What the hell was that about?”

The book The Seventh was the seventh Parker book, and the money was supposed to be split seven ways, so “the seventh” was what Parker was trying to get. If I remember right the heist was over much quicker in the book and the story was mostly about the aftermath. Also the way he lost the money made more sense because the girl he left it with was more familiar with his life and he just stepped out for a pack of cigarettes when it happened. In the movie he’s stupid and leaves it for a while with his uninvolved girlfriend. Like she’s gonna guard it.

For the most part though I think I understand why they felt they needed to Hollywood it up a little. It takes away some of what is unique about the Parker of the books, but it leaves a pretty solid heist movie that’s probaly a little more accessible. Parker in all the books (and none of the movies) is completely emotionless. He doesn’t even have a slight whiff of a soft side. Just a cold-blooded bastard concerned only with money. When his girl is killed he kind of figures well, shit happens. He only cares about getting his share back. But, you know, we expect that in Parker book #7. I can see why they’d worry that it would be too harsh in a standalone Jim Brown movie. He gets poor Diahann Carroll killed and doesn’t give a shit? No, they have to show that he wants vengeance (although to be fair the money does seem more important to him, since he knows he can get it back). Also unless I’m mixing it up with another one I think the book is one of the few where he loses at the end. But again, that’s in the context of a series, and you know he’ll get back on his feet in the next book. Might be more of a bummer in a movie.

A side note: I was telling some buddies about this movie and one of them heard me wrong, said “Jim Brown is in a parkour movie!?” And I thought damn, I would watch that. I don’t want poor Jim Brown to have to jump off buildings at his age, though. But how about a parkour Parker? The Luc Besson version of POINT BLANK. He could actually climb Alcatraz at the end. Think about it.

Ernest Borgnine Gene Hackman heists Jim Brown Parker Richard Stark Warren Oates
This entry was posted on Monday, April 20th, 2009 at 2:30 am and is filed under Crime, Reviews. You can follow any responses to this entry through the RSS 2.0 feed. You can skip to the end and leave a response. Pinging is currently not allowed.

12 Responses to “The Split”